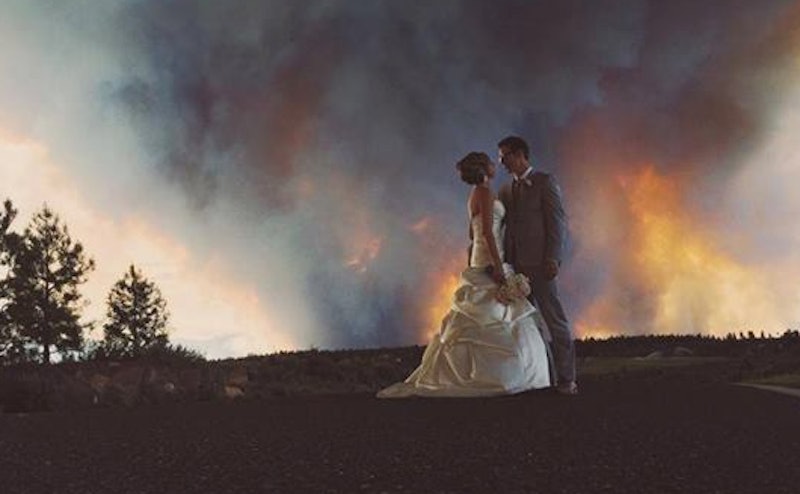 You’ve probably heard the old adage about “keeping the flame alive” in a marriage. Well, Oregon couple Michael Wobler and April Hartley took that challenge to a whole new level when a wildfire interrupted their wedding on Saturday. There is photo proof, and it's pretty incredible.

With smoke and flames patterning the sky behind the lovers, their wedding photos look like a cross between a Vogue wedding shoot and something fit for National Geographic. (Or, for a less glorified comparison, like the covers of those old romance novels with the three-word titles...Just picture these shots alongside titles like My Burning Romance or This Ravaging Love). Wedding photographer Josh Newton, uploaded one of his smoke-filled shots from the wedding onto Facebook — taken with his phone, no less —and it went viral within days.

According to Oregon Live , after learning of the fire, the minister conducted an abbreviated ceremony before evacuating the couple and their guests to a safer location. “It was like a movie,” the groom told the Oregan-based blog, “We saw a fire truck roll up with sirens blaring.”

"While the guests, caterers, and DJ all moved to Drake Park and set up, we snuck away and got some of the most incredible wedding photos I've ever taken," Newton wrote on his public Facebook page.

A natural disaster backdrop definitely ups the wedding photo game. However, given this occurred completely by chance, other wedding photography trends may still be deemed more extreme. In China, for instance, entire fake European cities have been built for the purpose of wedding photographs. One such mock city is "Thames Town," a faux English village complete with Tudor-style homes and a Gothic church.

However, these photos are certainly far classier than most of the wedding photos that go viral on the internet, which include such cringe-worthy gimmicks as "the tiny bride" (a perspective picture where it looks like the groom is holding the bride in the palm of his hand) and "the bride-groom" (when the groom hides under the bride's dress to make it look like they are one person, kind of like when JD and Turk in Scrubs dress up as the Giant Doctor). Nope, nope, nope.