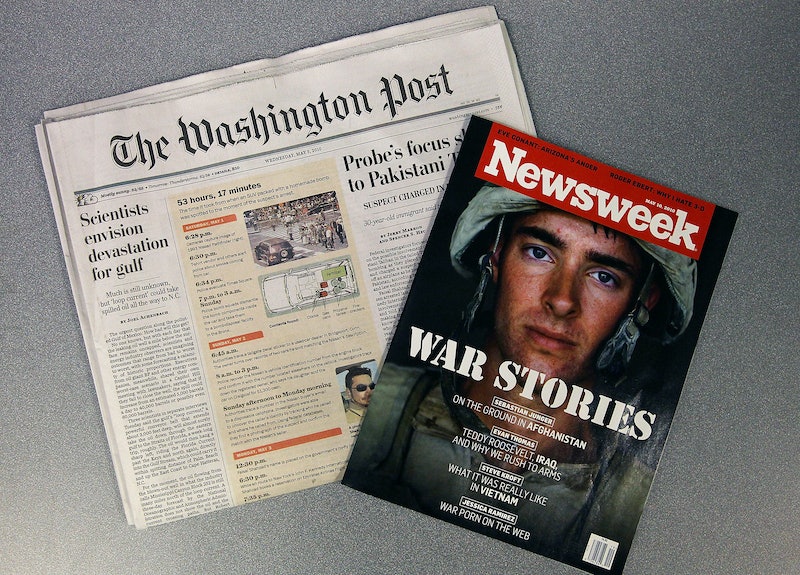 Not really into rape apologists? George Will's "survivor privilege" Washington Post column will make your blood boil. Will is a columnist for The Washington Post who, in addition to regularly borrowing Donald Trump's toupee, has somehow been granted inches of space in one of the nation's most storied newspapers for the purpose of — what else? — hating on college women for reporting sexual violence and demanding better treatment and protection for victims of sexual assault.

Consider the supposed campus epidemic of rape, a.k.a. “sexual assault.”

Don't worry, the newspaper is totally going to give Will's detractors (people who consider themselves members of categories including "polite society," "educated human beings" and "compassionate citizens") space in the newspaper to share their views on Will's noxious, outdated opinion. Which is a little bit like publishing a column arguing the Earth is flat, disparaging actual evidence that it is round without offering up any evidence to the contrary, and then being like, "You guys, stop freaking out, we're gonna give you naysayers space to respond!" Except in this case we're talking about basic human rights, like, you know, the right not to be raped.

And speaking of rights: Yes, you have the right to publish what you want on your opinion page, Washington Post, but should you? Is it ethical?

In case Will's boss, editorial page editor Fred Hiatt, forgot, the purpose of a newspaper's opinion page is not solely to garner hits. The role of an opinion page and its columnists is to present intelligent, educated and hopefully unique views from people who are paid a fair amount of money to research and compose those viewpoints. There are some fair arguments about whether the editorial page continues to be a great model for the airing of opinions in the 21st century, but let's leave those aside for now.

Here's what Hiatt told The IB Times about the whole disaster:

I think George’s column was well within bounds of legitimate debate on an important topic. I welcomed his perspective and I think the ensuing debate, including responses we will publish, is very healthy and exactly what a good opinion section should be offering its readers.

Publishing a column that suggests reporting sexual assault is an act affiliated with a particular political party is a farce. Generating discussion is not necessarily the sign of a column well-penned, nor an editorial decision well-made. The only political opinion a woman is expressing when she reports a sexual assault is the opinion that women do not have to remain silent in the face of sexual assault and rape. In short, it is not an opinion at all. It is a right just as sacred, and perhaps even more fundamental to a democracy, as the right to free speech: The right to control our bodies.

But let's just say it wasn't a great day for The Washington Post on the women front. This is a real headline they ran on their new venture, PostEverything, on Tuesday.

Got that, ladies? Stop taking lovers, get married, and shut up about your supposed "sexual assault." We don't need any of that liberal hogwash around here.

Great messages from a supposed bastion of the Fourth Estate this week, folks.