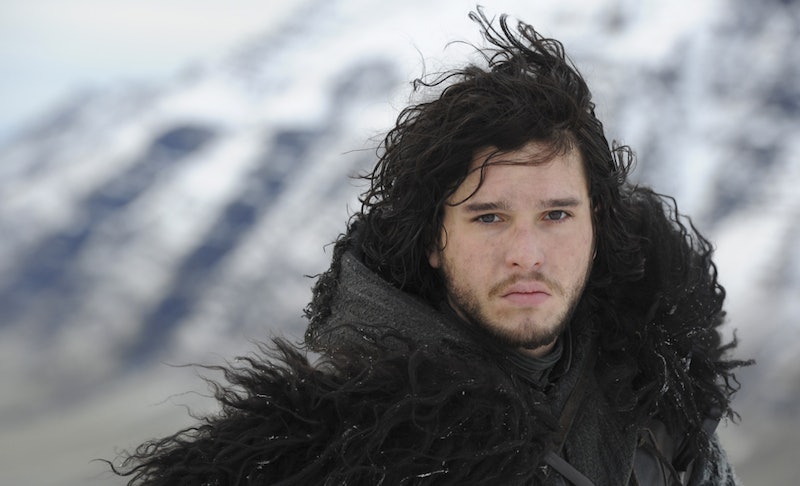 Kit Harrington's Jon Snow may have at one point known nothing (Ygritte fixed that right up), but he's always seemed to know a lot about hair care. It may seem hard to keep curly locks looking lush in freezing temperatures, but he seems to pull it off. This is likely because Harrington's hair is very important to Game Of Thrones ' production team — at least if the behind-the-scenes contract requirements are any indication.

Harrington recounted the oddities of his hair situation during a recent appearance on Live! With Kelly and Michael:

I didn’t realize [I was contractually obligated not to cut it] until recently and then I kind of, I wanted to cut it — I’ve had long hair for ages — and they were like, ‘No, no, no, that won’t be happening.’ Can we have four inches off or can we have an inch off? What can we do with this? How curly should it be? It gets silly.

It makes (weird Hollywood) sense in a way: People freaked the fuck out when Kerri Russell cut her hair during the run of Felicity, and hair politics in Hollywood have never quite been the same since. Cyd Charisse's legs were insured back in the day, too, though legs arguably do a lot more than hair and Charisse was a dancer. Still, one could argue that Jon Snow's hair does a lot of dancing on Game Of Thrones, and this chivalrous persona relies a lot of consistency — as well as many in the audiences finding him a certain kind of hot — so it follows that the producers would be wary of changing up his look too much.

Still, you gotta wonder what kinda conditioner they had in the far North of Westeros back then.

More like this
'Games of Thrones' Fans May Recognise This 'Conversations With Friends' Location
By El Hunt
Billie Piper Just Confirmed 'I Hate Suzie’s Festive Return
By Kayla Blanton and Shahed Ezaydi
Yes, Billboard Queen Angelyne Really Ran For Governor Of California
By Brad Witter
50 Years After Creating Her Alter Ego, Angelyne Is Still Driving That Pink Convertible
By Gretchen Smail
Get Even More From Bustle — Sign Up For The Newsletter