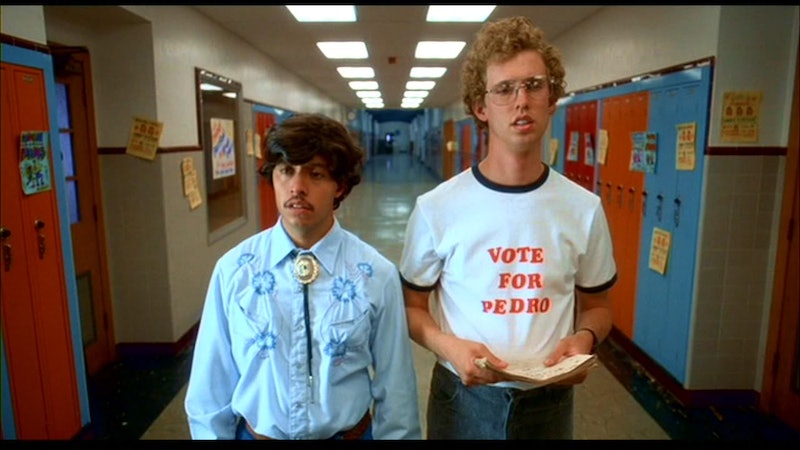 Ten years ago today, a very strange movie swept the nation. Nay, it swept the world. Napoleon Dynamit e is now ten years old, and it's got a legacy that remains pretty unique. Can anything really have the same weird effect that climactic dance scene had? Will the world ever be quite the same again? Doubtful. In honor of the film's ten years, here are ten things you might not have known about the film, its cast, and its production. It even involves the Idaho state legislature.

Jon Heder was only paid $1,000 to play the starring role of Napoleon; he did it mainly as a favor. After the film hit it big he renegotiated his contract, though, and got a bigger payday.

The film was only shot in 22 days. It was filmed in director Jared Hess' hometown of Preston, Idaho.

Tina the llama belongs to Hess' mother in real life. It is till alive and well and even showed up for a recent reunion.

The scene in which Lyle the farmer shot a cow in front of a school bus is an actual thing that happened in Hess' childhood.

The Idaho legislature passed a bill celebrating the film. It included such commendations as "Pedro's efforts to bake a cake for Summer illustrate the positive connection of culinary skills to lifelong relationships" and "Napoleon's tetherball dexterity emphasizes the importance of physical education in Idaho public schools."

Ligers are a creature that actually exist in the real world, though they have not been proven to have "skills in magic."

No choreographer was involved in that iconic dance scene.

I just assumed that we’d be able to Hollywood it up and there would be some temporary things I’d put in while we were shooting and I’d just kind of take them out. And then flashforward to, you know, showing up at Jared’s place a week before shooting and I’m in the orthodontist’s chair getting real braces attached to my teeth.

Both Heder (Napoleon) and Efren Ramirez (Pedro) have identical twins in real life.