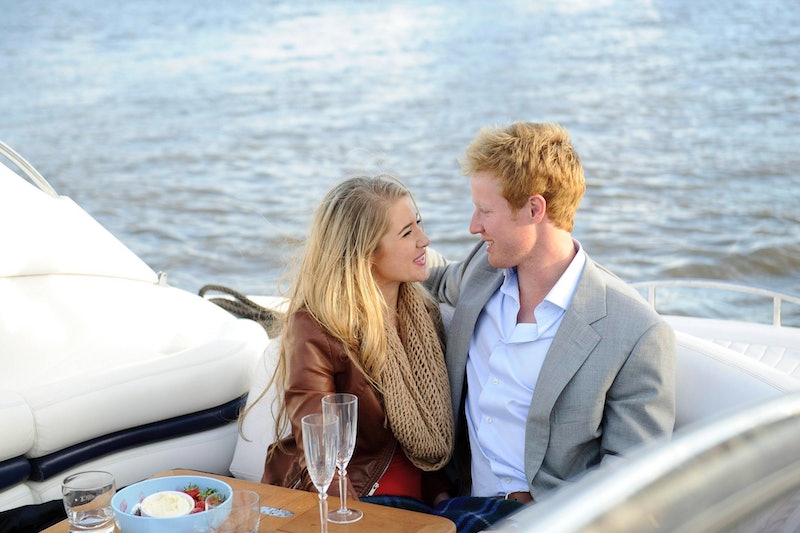 Is Fox's reality love show I Wanna Marry Harry actually going to end in romance? If the fake Prince Harry Matt Hicks has anything to do with it, then yes. After stating numerous times that his intention on this show was to actually find love, Hicks seems to have chosen his leading lady in Karina Kennedy. He already seemed smitten with the blonde after their hot tub chat last week, but Tuesday's episode sealed the deal as far as Hicks was concerned. Is Karina as head over heels for Hicks as he is for her? Possibly.

After elevating Karina to the crown suite last week, Hicks spent as much time with her as he could. The two had breakfast together and went on a romantic trip to London. He even stole her away from the rest of the ladies during dinner so they could have a private make out session in his bed. "Tongue and everything!" Karina reported back to the girls like they were at a slumber party and not on a dating show all competing for the same guy.

It was very obvious that if the fake Prince Harry could end the show now, he'd pick Karina to walk away with him. Even the other women picked up on his attraction. "He really likes her," Kimberly lamented after Hicks summoned Karina to his room. But is there a chance she'll fall for him, and stick around even after she learns he's not fourth in line to the British throne?

Karina has a lot of potential to be there at the end not caring who Hicks is or isn't. She's stated on multiple occasions that she just wants to get to know Hicks for who he is and doesn't care if he has status. Of course that could be because she's trying to impress the camera team with her cool attitude while she's secretly fangirling inside. After last night's episode, where all the girls now definitely believe Hicks is Harry, she did get a little star struck. "I think I could be Prince Harry's girlfriend" she marveled. Is she caught up in the Prince Harry charade or is there a chance she could have fallen for him in real life? I do think there's a possibility she could really be in it until the end, but does that mean she and Hicks get their happily ever after? Probably not.

The series filmed last summer, and Karina's LinkedIn shows she started a new job in October, so unless Hicks moved here, it seems doubtful that they lasted as a couple. But the show is fond of putting up a front (I mean, Kingsley's not even a real butler) so maybe the LinkedIn is a plant. Besides, there is some evidence in favor of the couple.

Karina's only social media account is her LinkedIn. Of the remaining contestants vying for Prince Harry's heart, she's the only one without a Twitter account, and she doesn't have an Instagram, either. While the other women are busy promoting the show online, Karina is keeping a really low profile. Is this because she's the "winner" of the show and has to be hidden away until the big reveal at the finale? It seems plausible.

She's also done one interview for a local Chicago paper about the show in which she stated that she doesn't have any regrets and she did fall for Hicks. “He did a really great job,” she said. “He was just so charming, you trusted him.” The use of the past tense is a bit troublesome to those hoping for a happily ever after, but with reality shows you never know for sure which pieces of evidence are playing you. Maybe Karina moved back to the States in the interim while the show was produced and when the finale is aired she'll move to England. Maybe Hicks will move for her. Maybe this absolutely insane reality show will really end the way they want it to. Or maybe I'm reading too much into things. But from where I'm standing, if anyone has a shot at coming out of here as a couple, it's Matt Hicks and Karina Kennedy. They said it themselves: they both "quite like" each other, and that's more than any of the other women can claim.