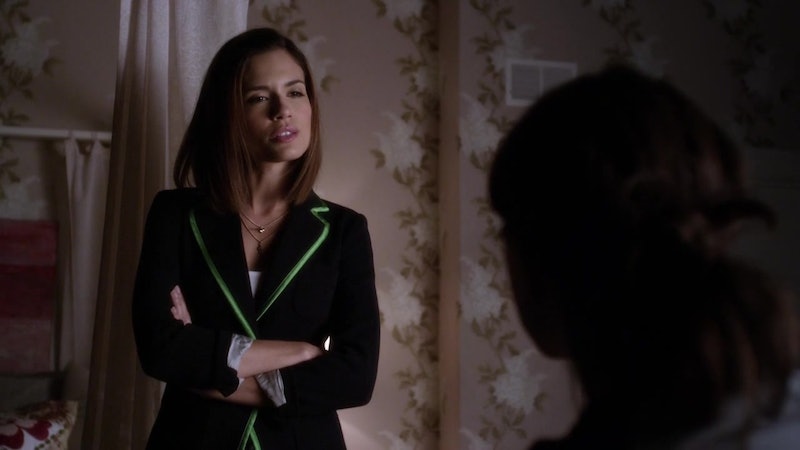 "Raise your hand if you've ever felt personally victimized by Alison DiLaurentis." If yes, feel free to join #MonasArmy — but Mona's not in charge. We were all waiting for the big "A" reveal on June 10's Pretty Little Liars Season 5 premiere and we got it. And I'm not talking about Ezra's revelation that Shana is "A" — I'm talking about Melissa Hastings bursting in on Mona's victim convention and commanding the troops. So, is Melissa in charge of the "A" game now? It sure seems like it.

PLL's Tuesday night premiere dragged us all over before even giving us a taste of the "answers" I. Marlene King promised fans in Season 5. We saw Mona watching the news and learning that Ali's secret was officially out, but we had no idea what she meant when she said that it changed everything. And then there was the return of sniveling Lucas, who's been hiding out and being homeschooled, that distracted us a little from what the hell was going on in Rosewood. (Lame.) He was as whiny as usual — reminding me exactly why I haven't missed him.

So how does this all lead back to Melissa Hastings? Mona held a meeting of the minds of all of the people that Alison tormented during her reign of terror — Emily's ex-girlfriend Paige aka Pigskin was in attendance. And she more or less told them that Ali was coming back and the shit was going to hit the fan for everyone — including her — but if you joined #MonasArmy, she'd be able to protect you. Or rather, Melissa can protect you.

We didn't know why Melissa came back from London for sure, or if she was even in London at all — but now we do. Just after Mona got done reading the wrap out to her new minions, Melissa stormed in and started commanding the troops. So is Melissa "A"? Absolutely. Remember when Mona admitted to the liars that she'd once acted as "A," but when she got sent to Radley someone else took over the game?

Well, that someone was Melissa Hastings. Otherwise, why would Mona take orders from her — or anyone for that matter? Mona's an evil genius in her own right, she's not going to let someone else take over her game — especially not a Hastings. The only logical explanation for Mona to build an army and let Melissa command it is because Melissa Hastings is "A." For real.

More like this
The 'Freeridge' Cast Shared Their Hopes For A Potential Season 2
By Grace Wehniainen
'Succession' Season 4 Will Be An "Absolute Banger" According To Cousin Greg
By Bustle Staff
Everything To Know About A Potential 'Lockwood & Co.' Season 2
By Gretchen Smail
Everything To Know About 'Cobra Kai' Season 6
By Brad Witter
Get Even More From Bustle — Sign Up For The Newsletter
From hair trends to relationship advice, our daily newsletter has everything you need to sound like a person who’s on TikTok, even if you aren’t.