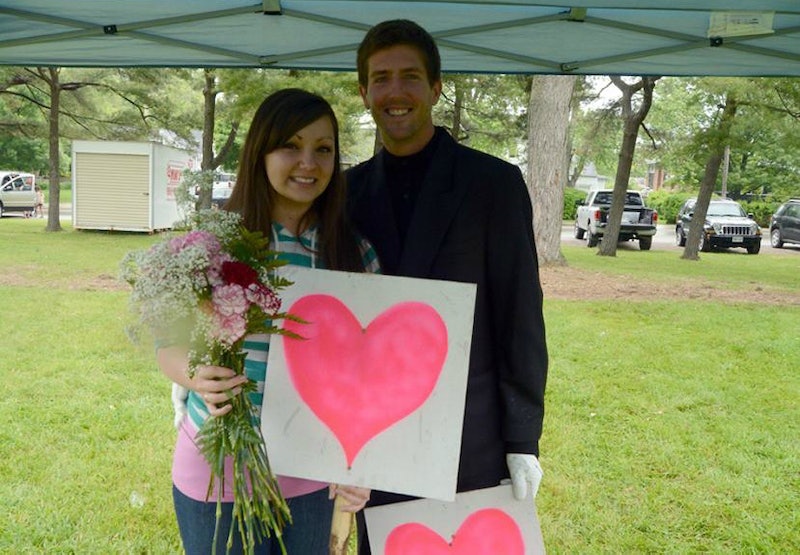 If you started to spot a whole bunch of signs with nothing but gigantic pink hearts on them all over your city, what would you do? If you’re a reporter, you’d probably pitch the story to your editor and attempt to get to the bottom of it. That’s exactly what the Welland Tribune’s Maryanne Firth did when she noticed the aforementioned signs popping up all over Welland, Ontario way back in April. Little did she know that by solving the mystery, she would be walking right into her own marriage proposal.

After making note of all those signs around town, Firth’s interest was piqued. She sent out a call on Twitter asking anyone who knew what the signs meant or who might be behind them to get in touch with her; she even wrote a story about the fact that no one had stepped forward to claim the signs. The mystery persisted for almost two months, until last week, new signs started appearing next to the existing ones that indicated something was going to happen at Chippawa Park over the weekend.

So Firth, good reporter that she is, grabbed her camera and her notebook headed to the park on Sunday. She found a tent near one of the park’s pavilions around which a crowd had gathered, as eager to find out what on earth was going on as she was. Inside the tent was a man dressed in a suit with a box over his head — yes, a box, adorned of course with a pink heart — handing out flowers to passersby. When Firth arrived, however, he gathered up the remaining flowers, turned to her, and took off the box. Hiding inside was… her boyfriend! Ryan St. Denis, whom Firth had been dating for eight years, got down on one knee and popped the question. She said yes, of course, and the park was full of jubilation for the rest of the day. 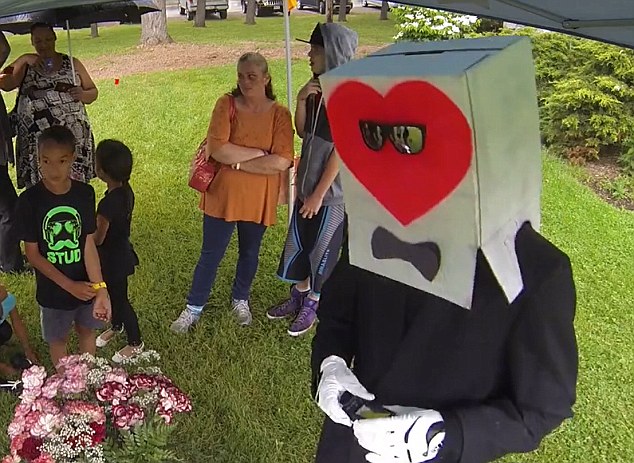 I’m not a huge proponent of public marriage proposals, and as I’ve said before, I think viral engagements — either videos or otherwise — cheapen the whole thing if they’re intended by their planner to go viral in the first place. This one, though? I can actually get behind it. Unlike a lot of attention-getting proposals, this one is all about its recipient, rather than its instigator, and that makes all the difference. Firth’s fiancé took note of some of her key characteristics — her reporting abilities, her perseverance when it comes to unraveling mysteries, and so on—and used them to create something specifically and wonderfully for her. As Firth wrote herself in a piece she penned for the Tribune (she still had a story to deliver, after all), “It all boils down to the fact that Ryan St. Denis knows me better than I know myself. He knew I’d see the signs. He knew I’d be curious. And he knew my nose for news would drive me to unearth the secret.” Take note, guys and gals who want to surprise their significant others with an epic proposal: Successful ones are always — always — about the person to whom you’re proposing.

Granted, the whole thing could have gone horribly, horribly wrong if she had said no; something tells me, though, that these two have talked about marriage at least once in the course of their eight-year relationship, making the risk of rejection considerably less. In any event, congratulations to the happy couple, and hats off to St. Denis for pulling off an impressive and touching proposal. May you have many happy years together!