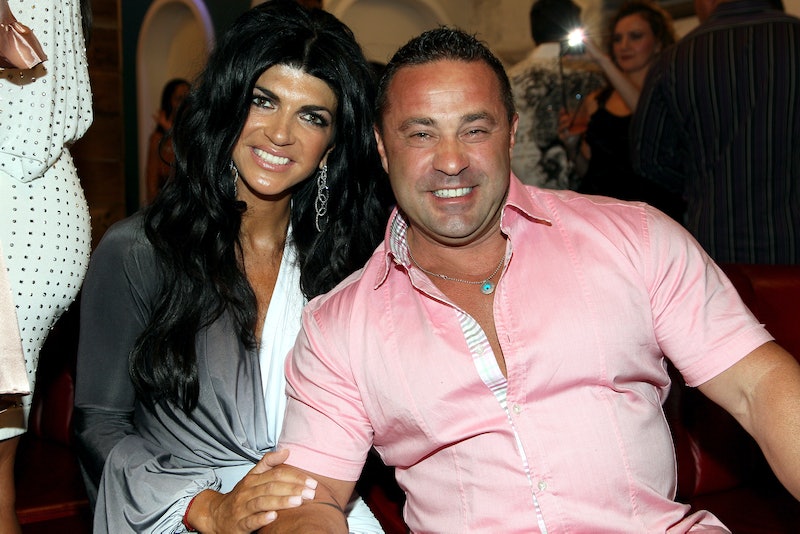 Real Housewives of New Jersey stars Teresa Giudice and husband Joe Giudice have been indicted on 39 counts of fraud, and Bravo Nation is, well, not surprised. Having watched this family on reality TV for the last six years, it's been obvious to anyone with half a brain that they're not who they say they are. It's also been obvious that they're just not good people — federal charges were a matter of when, not if, and now that these two are being forced to face the music, let's take a look back at their unsavory behavior over the last few years. If their legal problems don't put them behind bars for 50 years, these instances certainly could.

When we met Teresa on Season 1 of the RHONJ, she explained her husband's profession was an "entrepreneur" as she bought $120,000 worth of furniture, in cash, for the enormous French chateau they were building together. She shopped for diamond necklaces and got a boob job. Is it illegal to spend money? Nope. And in Season 1, Teresa came across just more ditzy than harmful. That was all about to change, though.

On the last episode of Season 1, Teresa's true colors came out. After Danielle Staub slammed down her infamous book, Teresa freaked out and flipped the table. The phrases "fucking engaged 19 times" and "prostitution whore" were thrown around. The best part is, Tre was disgusted with all of Danielle's lies ... pot, meet kettle.

In Season 2, it was Teresa's attack on Danielle that started the enormous fight in a country club, no less, that ended with Danielle getting carried Bodyguard-style to her Range, Jacqueline's daughter Ashlee with assault charges, and Teresa getting off scot-free.

During the Season 2 reunion, Teresa was accused of not seeing her newborn nephew in a timely manner, and in the first episode of Season 3, we saw it all come to a head. When she went to offer her fake-ass congratulations to her brother Joe Gorga and his wife Melissa, all hell broke loose at the ostensibly holy event.

Leave it to Teresa to find a way to use a family-friendly cookbook to insult her cast members. In the intro of the book, Tre takes digs at Melissa, Kathy, Caroline, and Caroline's children. Keepin' it classy, Teresa. Keepin' it classy. Season 4 started out with Teresa on wrong side, and everyone else on the right side.

What started out as a relatively nice trip to wine country ended in one of the most heartbreaking scenes on the show. Even though Teresa is far from sympathetic, it was hard to see her let her gross husband Joe get away with his patent cheating. At the Season 4 reunion, the two denied he was seeing someone else, which just made the whole situation that much more depressing.

Season 4 is also when Teresa started to really let her evil flag fly. It was clear to everyone that she used Kim D. and her bald friend to try and "expose" Melissa's stripper past at the Posche fashion show, and when confronted with the accusations, all Teresa could do was deny, deny, deny. Unfortunately, that tactic won't work so well in front of a grand jury.

In Season 5, Teresa tried to bring down Melissa, again, this time at Gia's birthday party. Using Kim D., again, Teresa seized the opportunity to try and put Melissa on blast for not visiting Teresa's dad in the hospital. It was pathetic.

Currently in Season 5, Teresa continues to strive to tear apart her family, no matter what that Lake George retreat says. She'll stop at nothing to be the star and will take down any one who gets in her path, including, if not especially, her family.

Now, Teresa and Joe each face up to 50 years in prison if they're convicted of all 39 counts of fraud. Teresa denies any wrong doing, naturally, and her lawyer insists he's looking forward to vindicating her in the court of law.

If her lawyer was a Real Housewife fan, though, he might know better than to defend Teresa. Her actions over the years have provided wonderful reality TV moments — no one likes to watch her try and out-smart her family more than we do — but the fact is, at her core, it seems like Teresa doesn't know right from wrong. With some reality stars, you know their personality is just an act for the cameras, but with Teresa, her drama seems to stem from a dark place, a real, dark place, and it's now been brought to light that she might be just as shady off-screen as she is on.