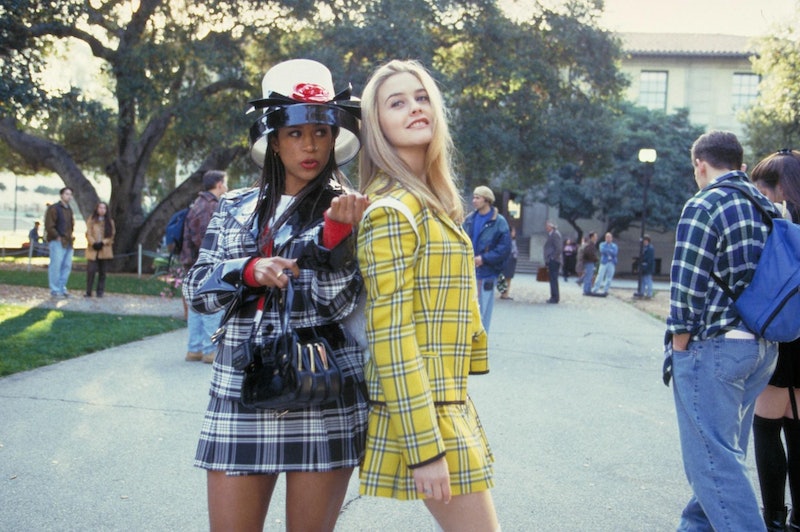 All slang ends up sounding ridiculous and dated after enough time has gone by; the ‘90s, however, were a unique brand of bizarre that holds a special place in my heart. I’m sure it does in the hearts of many of you, too, so, in honor of Throwback Thursday, let’s revisit some of the strange words and phrases that made up our formative years. The selection here leans slightly towards my own bias; I have, however, attempted to cover as much ground as possible, including 10 wide and varied terms, each with their own, detailed entry.

The entries are all divided up into five sections: The words or phrases themselves and their parts of speech, their definitions, examples of their usage, their origins, and their current forms in today’s cultural lexicon (if, that is, they have managed to both survive and evolve). Naturally, it’s all very scientific — by which I mean it is not scientific in the slightest, so go take it up with an actual linguist if you think I’m wrong.

So, in no particular order, I give you: Bustle’s Selected Dictionary of ‘90s Phrases and Terminology. Feel free to add to the list on Facebook or Twitter!

Definition: An uncomfortable or uneasy feeling; a sense of foreboding.

Usage: “I don’t know, man. Something about him gives me the wiggins.”

Origin: Coined by Joss Whedon in the first season of Buffy the Vampire Slayer (1997). From “Welcome to the Hellmouth/The Harvest”: “This place give me the wiggins.” – Buffy.

Current form: Various, including the verbs “freaks me out,” “weirds me out,” etc. “Wiggins” itself may be used as a marker for fans of Buffy the Vampire Slayer in particular or Joss Whedon in general.

Origin: Unconfirmed, although many site the 1992 – 1997 Martin Lawrence television show Martin as its original source. Some, however, trace the phrase as far back as Renaissance England; in this instance, the Nurse’s encouragement of Juliet to “Go, girl, seek happy nights to happy days” in Act I, scene iii of Romeo and Juliet is considered to be the earliest usage of the phrase.

Current form: Since the theatrical release of Mean Girls in 2004, “You go, Glen Coco!” has largely supplanted “You go, girl/guy!”

Definition: An indication of sarcasm; a modifier which denotes the preceding statement as false.

Usage: “What a totally amazing, excellent discovery… NOT!”

Origin: First proliferated by the Mike Myers and Dana Carvey Saturday Night Live sketch “Wayne’s World,” which periodically occurred in episodes from 1989 to 1994. It entered widespread usage after the release of the Wayne’s World feature film in 1992.

Current form: “HAHAHA no,” as demonstrated here by John Watson:

Origin: Although the word itself has existed since the late 18th century, at which time it described machines for making counterfeit currency, this particular definition became a part of the cultural lexicon thanks to the feature films Bill and Ted’s Excellent Adventure (1989) and Bill and Ted’s Bogus Journey (1991).

Origin: Unknown, although similar to “You go, girl/guy!”, some trace it to the Martin Lawrence sitcom Martin.

Current form: Various, including such physical gestures as eye rolling or simply turning around and walking away. Variations on a theme may also be used, as demonstrated here by Sheldon Cooper:

Definition: An expression which derides a topic of conversation as unlikely or impossible. Companion to “NOT.” See also: “Whatever.”

Usage: “Can you believe Rick asked me to the Spring Fling? As if!”

Origin: A Southern Californian “Valley Girl” term, “as if!” was popularized by the 1995 feature film Clueless, itself an adaptation of Jane Austen’s novel Emma.

Current form: “HAHAHA no,” this time demonstrated by Miley Cyrus:

Definition: Relax; don’t worry about it; stop freaking out, whatever is going on isn’t actually that bad.

Usage: “Jeez, Mom, take a chill pill — I only had one beer. Everyone else had, like, three.”

Origin: It is sometimes asserted that “chill pill” became popular nickname for Ritalin and other medications intended to treat ADD and ADHD at the time of their initial introduction. This claim has been unsubstantiated, however, and should be taken with a proverbial grain of salt. I personally think Xanax would make a better chill pill, but I digress.

Definition: A retraction of the previous statement with the intention of fooling the listener. Commonly misspelled “sike,” “syke,” etc. Generally mean-spirited.

Origin: This usage of the word may have seen its beginnings in 1934, at which point the verb form “to psych [someone or something] out” meant “to outsmart.” Editor’s note: I had no idea this particular meaning was so old. TIL, right?

Current form: “Just kidding!” Should the recipient of the phrase express displeasure at being fooled, it may be followed by, “Can’t you take a joke?”

Definition: Used to connote a feeling of apathy. Often accompanied by a hand signal formed by holding the thumb and pointer finger of each hand in an L shape and layering them on top of one another, forming a W shape. The stress commonly falls on the second two syllables.

Usage: "Are you listening to me, young lady?" "Whatever!"

Origin: Similar to “as if,” “whatever” gained popularity through the 1995 film Clueless.

Definition: An expression of joy or triumph.

Origin: Unknown, although ESPN anchor Stuart Scott is known for his frequent use of the term. Curiously, “booyah” is also a stew or thick soup of Belgian origin popular throughout the Upper Midwestern United States.