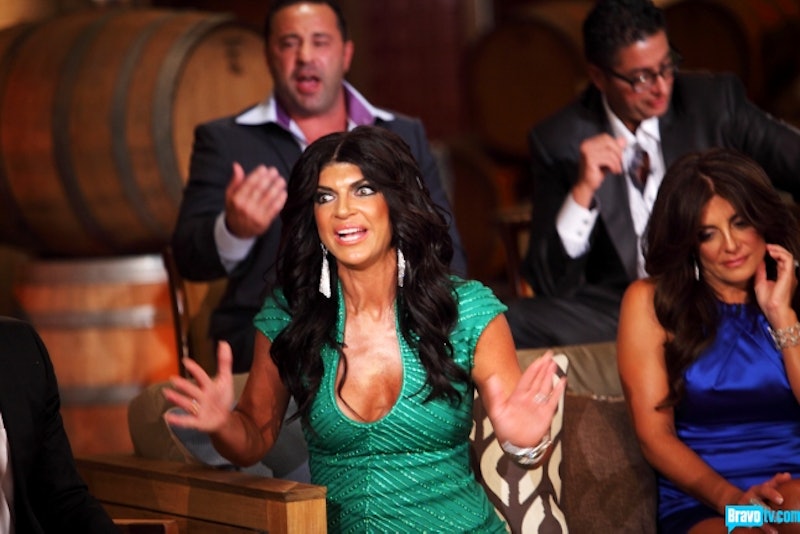 On Tuesday morning, July 30, Real Housewives of New Jersey stars Teresa Giudice and Joe Giudice appeared in a United States District Court in Newark, New Jersey court after being indicted with 39 counts of fraud Monday. The Real Housewives' indictment came after it was discovered the couple allegedly inflated their income when applying for a home loan, then significantly deflated it when it came time to you, know, file taxes. They've been indicted with bank fraud, mail fraud, loan fraud, mortgage fraud, among other charges, and face 50 years in prison, each, if they're convicted.

After facing the judge Tuesday, they were released on $500,000 unsecured bail bonds and were instructed to stay in New York and New Jersey until their next hearing, which is scheduled for August 14. They were also forced to surrender their passports.

The most fascinating thing to come out of this brief hearing is the revelation that Joe Giudice IS NOT A U.S. CITIZEN. Born in Italy, Us Weekly reports that he is not legally a citizen of the United States. Now, I have no idea what that means for the trial, but I gotta believe that this is not going to bode well. Pretty sure this is only going to serve to complicate things further, especially since Joe already faces felony identity theft charges for trying to use his brother's I.D. to procure a license.

I can't wait to hear what's revealed about these two next. First there's intense bank fraud, now he's not a citizen ... next thing you know Teresa's going to rip off that wig and reveal she's actually Joaquin Phoenix. The truth is stranger than reality TV — who knew?