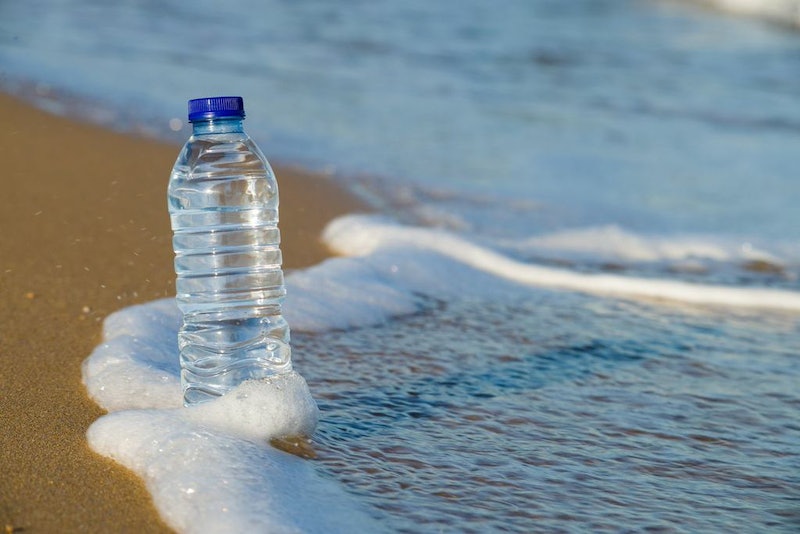 Water is everywhere, and somehow we forget to drink it. In the summer we are surrounded by pools, lakes, beaches, and water parks all blasting us with H2O. But you're not always thinking about how much water you are taking in while you are splashing around.

Women need to make an effort to drink nine cups of water a day — and more if you're exercising or pregnant — but you get 20 percent of the water your body needs in food. The most efficient way to do that is through eating foods with a high water content. These eight will help you in your fight against dehydration.

Most of us know by now that iceberg lettuce is not the healthiest choice to line the bottom of your salad bowl. Health experts often recommend darker options, like spinach and kale, because of their high fiber content and the large amounts of folate and vitamin K nestled in their leaves.

So when it’s hot, consider adding iceberg into your diet for hydration reasons. Maybe even swap it for hamburger buns and taco shells to get more water and fewer refined carbs.

Watermelon, unsurprisingly, is a melon full of water. But along with its obviously high hydration status, this fruit is one of the best sources of lycopene, an antioxidant found in red fruits and veggies that has been linked to reduced cancer risk. Watermelon actually has more lycopene than a raw tomato.

Good thing watermelon is at its peak in the summer, when we need its hydrating properties the most.

This white vegetable has more water in its little florets than many other vegetables and fruits (even beating the previously stated watermelon), not to mention an impressive list of vitamins and phytonutrients that studies have shown help lower cholesterol and fight several cancers, including breast cancer.

If you can’t stand the thought of eating raw cauliflower on its own, toss it on top of a salad in the place of croutons.

All bell peppers contain a lot of water, but the green peppers are the leaders, pushing red and yellow varieties out by just a few percentage points.

And though it is some times said that green peppers are less healthy than the sweeter peppers, green peppers contain just as many antioxidants.

The cool thing about peppers is that if they are on your list of favorite foods, you don’t need to find a way to work them into a meal, as most people are more than happy to munch on a few slices like any other raw veggie.

Tomatoes are great add-ons, always there for your salad, your sandwich, and your sauce. But we don't tend to bite into a tomato on its own, so what is a quick way to get all the hydration it has to offer?

May I present the cucumber, owner of the title “highest water content of any solid food,” which also happens to be a summer vegetable.

If you’re daring enough to want even more from your water-packed cucumbers, you can mix them with nonfat yogurt and mint to make a cucumber soup. Chilled cucumber soup: That just sounds refreshing.

The radish, a refreshing root vegetable that has a spicy-sweet taste like no other, is filled with both a ton of H2O and antioxidants like catechin (the one also found in green tea).

If you don’t think you can handle snacking on raw radishes on their own, try adding them to a salad or homemade coleslaw.

Celery often gets left out of the “nutritious foods” club (unless you’re caught in the myth about it having “negative” calories) for reasons I can’t understand. Maybe it just doesn’t look the part of a healthy veggie, with its pale green exterior and droopy leaves.

But celery is not only full of water, but also fiber, folate and vitamins A, C, and K. And of course it's a low (not no) calorie food. On top of hydrating you, its high water content helps neutralizing stomach acid, making it a commonly recommended natural heartburn and acid reflux remedy.