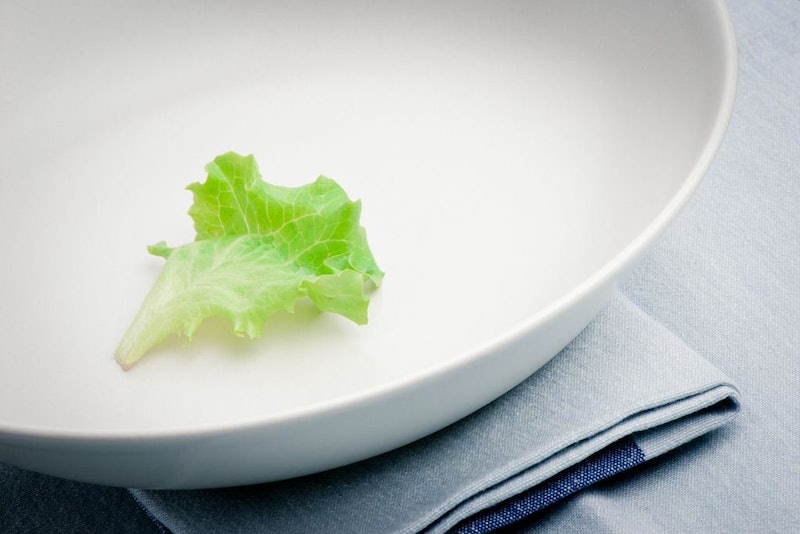 I hate the word “diet.” I really do. It makes my skin crawl, the way the word “moist” does other people's. This is because “diet” has two different definitions, and when people use it, they always seem to be referring to one definition and not the other.

A diet is something we all have. Every. Single. Day. You are on a diet every day. Everything you eat in a day, week, month, year, makes up your diet.

So the act of going on a “diet,” the less habitual and more restricting definition, has always driven me crazy. Because suddenly, what you eat every day goes from being your diet to what you eat on a diet. And if that warped use of the same word makes you feel uncomfortable, you can probably also relate to a time when you went on said “diet” and your brain got a little screwy. Sometimes, in the pursuit of becoming healthier and/or losing a little weight, we can start to lose sight of the goal, getting caught up in rules that don't necessarily make good nutritional sense. And unfortunately, sometimes this can be really dangerous.

In order to prevent this from happening, be vigilant about your behavior, and make sure you aren't making any of these dangerous dieting mistakes.

This should be a no-brainer, but it makes sense that it might be the easiest mistake you can make. You're trying to cut back on what you eat, and so you might start to eat too little. And then way too little.

Sure, that will lead to weight loss, but not in the way you really want. That lost weight will include some of your muscle. Not to mention the fact that starving yourself will lower your metabolism.

Need more of a reason? OK. Drastically reducing your caloric intake can cause a shift toward a higher percentage of fat in your body, which then increases your risk of developing metabolic syndrome and type 2 diabetes.

So unless you are on a medically regulated diet, don’t cut your calories below 1,200 per day. Otherwise, you will not be getting enough nutrients to fuel your body and satisfy your hunger.

There is always that friend who is telling you about some mystical miracle supplement that you need to try. But unlike the companies who manufacture and produce prescription medications, the ones who make these awesome supplements usually don’t actually have to prove that their products — even the so-called "natural" ones — are effective or even safe before putting them on the market.

If you're even considering taking any weight loss supplements, you need to check with your physician first to make sure that they're safe for you.

Lemon juice, maple syrup, cayenne pepper, and water. Yum? Whatever the ingredients, people don't do cleanses and detoxes for the taste — they do them for the associated immense weight loss.

Guess what: The weight you lose during a cleanse is from water and stool. And those can be dangerous things to lose, as you can become dehydrated or develop an electrolyte imbalance.

On top of that, all of this “cleansing” and “detoxing” is unnecessary. Your body is already wired to cleanse itself of toxins on its own. Using a cleanse to do this in a different way can mess with the internal system you already have in place.

If you are really on a purifying kick, start by drinking plenty of water and eating foods high in fiber.

Purging, according to its medical definition, includes making yourself vomit, chewing food and then spitting it out, and abusing laxatives. These behaviors are signs of an eating disorder.

The health risks that you run when performing any acts of purging include: the erosion of the esophagus, mouth, and tooth enamel due to contact with stomach acid, an increased risk of certain cancers and tooth decay due to continuous vomiting, excess fluid loss, dehydration, and electrolyte imbalances from vomiting and abuse of laxatives.

You should never use purging, in any form, to lose weight. It could cause you irreversible medical problems.

Taking Exercise To The Extreme

Exercising is great, and most of us don’t get to do it as often as we like. There is nothing like a runner’s high or the zen you feel after yoga. But exercising to excess can actually cause problems, like severe wear and tear on your muscles, increasing your risk for injury, and putting you at greater risk for dehydration and electrolyte imbalance. Psychologically speaking, sometimes exercise can turn into a punishment you inflict on yourself for eating.

Getting at least 30 minutes of “moderately intense cardio exercise five days a week, or 20 minutes of vigorously intense cardio exercise three days a week, and strength-training exercises that work all the major muscle groups two to three times a week,” is what is recommended by the American College of Sports Medicine and the American Heart Association.

In spite of those recommendations, some people think more is better and end up taking it too far. And just like any obsession, exercise can begin to control your life in an unhealthy way. Following a moderate regimen will make you more capable of sticking to it, and you won't hurt yourself in the process.

Using Drugs, Of The Legal Or Illegal Persuasion

There are prescription medications intended for weight loss, but most such drugs aren't FDA-approved. Unfortunately, people sometimes assume these unapproved drugs are safe, with dangerous consequences.

People have also been known to abuse cocaine, speed, and medications intended to treat ADD, thyroid disorders, and diabetes to lose weight. The risks of such behavior include addiction for one, which can lead to relationship and financial problems. Abusing these medications can also cause anxiety, severe headaches, strokes, and complications in organs like the heart, lungs, and kidneys. Losing weight isn’t worth losing any of those.

7. Using Smoking As Your Not-So-Secret Weapon

With the amount of information we have now about its negative impact on health, smoking is unbelievably careless. However, some people are willing to overlook the consequences down the road because they think of smoking as a diet aid.

Is there science to back up this approach? Well, nicotine has been recognized as an appetite suppressant. But if you ask me, the risks that come with smoking aren't worth the pounds you might lose while doing it.

Going over what I’m sure you already know one more time: Smoking harms nearly every organ in your body, is a leading cause of cancer, causes cardiovascular and respiratory diseases, and diminishes your overall health.

On top of all that? Weight gain is a common side effect when smokers try give up the cigs. So the best plan for your health and your waistline is to not smoke to begin with.

More like this
Why Experts Say Sleeping With A Fan On Isn’t Totally Risk-Free
By Sophie McEvoy
The 12 Best Air Fresheners For Bathroom Smells
By Amber Petty
How To Use Instagram Story Highlights So Everyone Sees Your Fave Stories
By Brandi Neal and Emma Carey
Your Daily Horoscope For August 12, 2022
By Mecca Woods
Get Even More From Bustle — Sign Up For The Newsletter