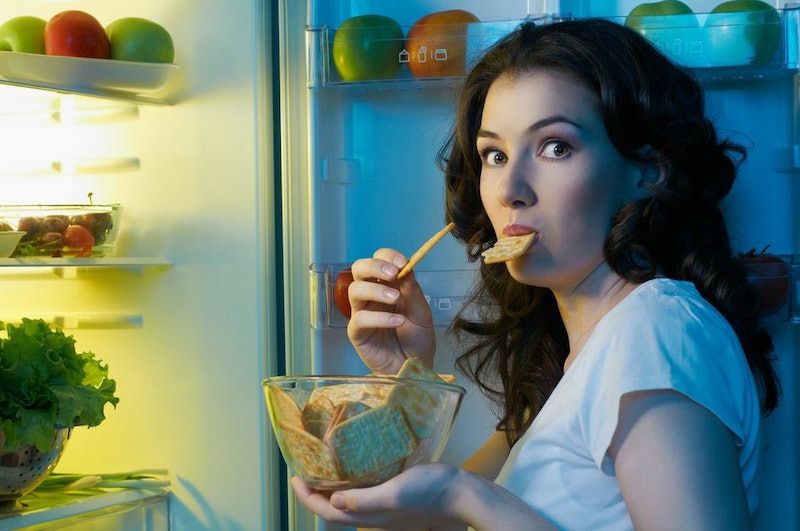 Does this scenario sound at all familiar?

It’s 1:00 a.m., and you’re starving. You’re lying in bed trying to make a list of all the things you’ve eaten today, wondering if you could possibly justify eating anything else. Right about now you’re regretting getting the venti instead of the grande at breakfast; the meatball parm instead of sushi for lunch; and the burrito instead of the bowl for dinner. And you’re mad at yourself for somehow still being hungry.

First of all, give yourself a break. Your body goes through normal digestion processes over the course of the day and with the way people’s professional and personal lives are scheduled nowadays, your meals can be spaced out so randomly that you will inevitably get hungry at times that don’t fall into designated “meal” slots. And most importantly, if you truly feel hungry it is because you are hungry, and therefore, you should eat something.

Now that we have gotten that out of the way, what do you eat? Well there are a couple of routes you could take, one of which being to get up and get an apple or some sensible carrot sticks, then go back to bed. In 30 minutes you will still be hungry, neither one of those being particularly filling, and this frustration could result in an all-out binge on whatever you have in your freezer. Let’s not go there.

I much prefer the route of having something substantial that will satisfy your craving (it is a midnight snack after all), but keep you from feeling like you just ate something horrible for you. What to have then? Here are a few ideas.

Wait, Nutella, the chocolately, heavenly, hazelnuty substance of life can some how be part of a guilt free late night snack? I’ve lost all credibility already, haven’t I?

Ya, it doesn’t sound like the lightest late-night sweet, but hear me out. First of all, it’s a mug cake — something you may have heard of if you have ever been anywhere near Pinterest — and as such, you only have a mug full to pig out on.

A great recipe for this concoction is the 4-ingredient variation from KirbieCravings.com, which keeps things pretty light with just Nutella, flour, baking powder, and fat free milk.

So, yeah, it’s Nutella, but there is no added sugar or eggs or anything for you to fill your little head with guilt with as you enjoy your mug full of chocolate tonight.

If you’re craving ice cream and hot fudge, try gelato and espresso instead, commonly known as affogato. Why is this a better late night option? Well, because gelato is made with just milk (and not both milk and cream, as is the case with ice cream), it is a somewhat lighter choice. And that heavy chocolate sauce you love so much is going to make you go crazy when you read the expected serving size (2 tablespoons???).

And making affogato is as easy as pouring a shot of espresso over a scoop of vanilla gelato, the combination of which could make you forget all about a sundae in the first place. And yes, I know it’s late and you need to get up in the morning, so by all means use decaf.

If you’re in a situation where you’re particularly hungry because you actually missed dinner and were trying to tough it out until morning, you might need something more substantial and on the savory side. You could go right for a frozen meal, or some stovetop mac 'n' cheese might be your go-to. But, there is a better option.

This recipe for a cheesy spaghetti pie, created by chef Marc Murphy, of Landmarc and Ditch Plains restaurants in New York, uses already cooked noodles (which you could have on hand from the previous night’s pasta) and doesn't have any butter, cream or milk. So enjoy that mac ‘n’ cheese substitute guilt-free.

I know I said munching on veggies is gonna leave you unsatisfied in this late night situation, but I was talking about raw and uninspired veggies, the opposite of which is a concoction composed of broiled cauliflower, olive oil and sea salt. I’m sure your mouth is already watering.

Chef Jesse Schenker makes this snack for himself after long shifts at his restaurant Recette in New York, to get a crunchy fix that is “so satisfying and healthy even in the midnight hour.”

The recipe is also super easy to make, so there's no excuse for reaching for a bag of potato chips instead.

Popcorn is always associated with movie theaters and liquid butter, but it can actually be quite a healthy snack. For instance, if you were to say, pop a bag of 94-percent fat-free microwave popcorn and spritz it with a tiny bit of butter spray, then sprinkle a little low-fat Parmesan cheese on top, you’d have yourself a fiber filled snack.

And that added bonus of cheese is gonna make it into more of a special treat than popping a bag of the unhealthy movie theater variety any day.

Make a chocolate shake! That’s right, if it’s late and you want chocolate but you’re not a Nutella fan (it’s okay, we hear others like you exist) this recipe, created by the Skinny Chef, Jennifer Iserloh, is a great alternative, with a secret ingredient: avocado.

And that avocado might be just what you need to convince yourself this drink is worth it, as it gives this shake its smooth texture and adds in some essential vitamins and nutrients too.

Just keep in mind that if you have roommates or a significant other, busting out the blender at 2 a.m. could bring more (grumpy) people to the yard. I mean kitchen. Be prepared to share.

It is dangerously easy to pick up the phone at any time of the night to order a pizza. Especially because you can just use an app to do it now, so you don't even have to hear the judgment in the voice of the pizza place guy.

But if you can resist the urge and happen to have some English muffins on hand, we can probably work out a solution in the form of some delicious mini pizzas.

You take those muffins (preferably whole wheat, but I’m not judging your pantry at 1:00 a.m.), slice em in half, add a little tomato sauce and part-skim mozzarella cheese, and you have yourself an adorable low-fat snack that is way less greasy than that delivery stuff. If you can manage to scrounge up a few veggies to throw on top, you deserve a hug. And a good night's sleep.