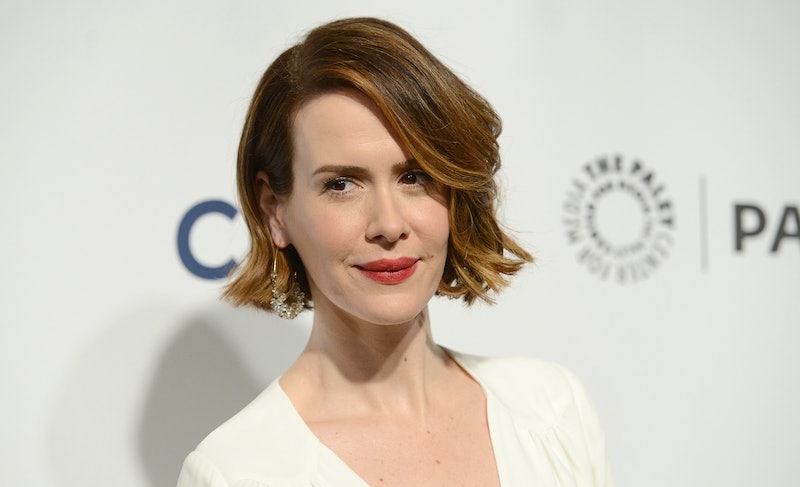 "So excited to be playing Bette AND Dot this season," Paulson tweeted Thursday along with a picture (below). "Two heads are better than one!" The show, which is taking place in 1950s Florida at one of the last freak shows in the U.S., will no doubt feature many oddities, and Paulson's two-headed woman is one of them.

Though next season will probably lack last season's ingenue Tessa Farmiga, stars like Paulson, Jessica Lange, Emma Roberts, Gabourey Sidibe, Angela Bassett, Kathy Bates, and Evan Peters are all slated to return. Paulson talked to E! recently about the recent season, noting that her main reaction to the first script was a succinct "holy shit."

I feel like that's the appropriate reaction you want when you read the first script of American Horror Story. So it's very exciting and totally nerve-wracking in the best way because you think, "How the hell am I going to pull this off?!" And as an actor, I think that's an exciting thing to feel.

The way she describes the vibe of this season's also got us pretty psyched:

[It's] a kind of beautiful hybrid between Coven and Asylum. [...] There's going to be a little bit of a richer and potentially darker tone the way Asylum had, but with the humor infused from Coven. When you add Kathy Bates to the story, she's so funny, and Emma Roberts was so funny last year as Madison, I just think it's going to be a really beautiful mix of both.

We gotta admit, her Betty and Dot have us intrigued. What will Ryan Murphy & Co. cook up for the rest of the cast?