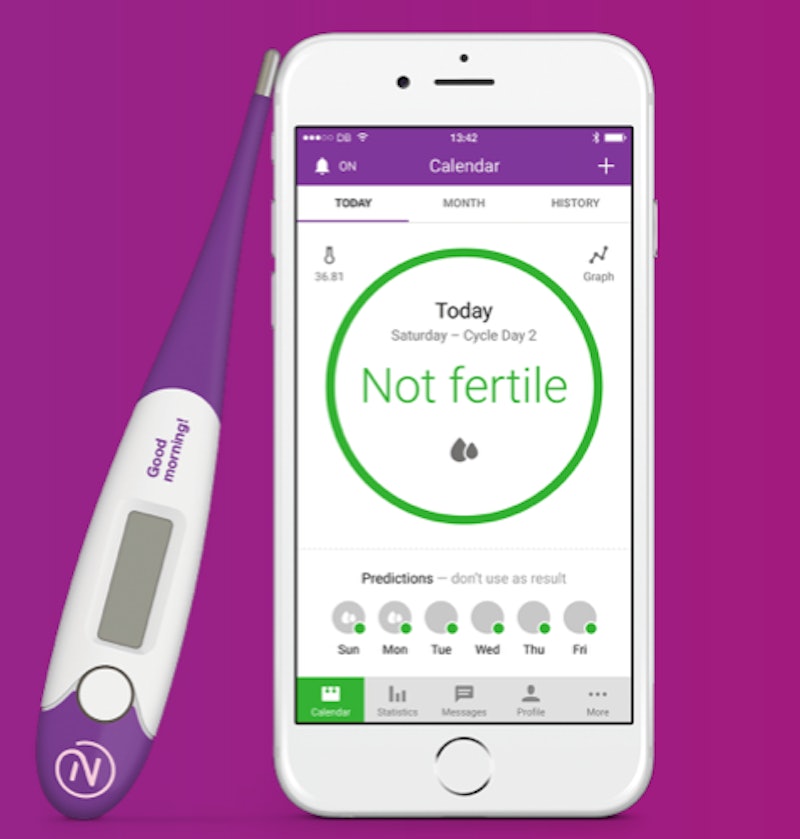 Would you feel comfortable relying on just your smart phone and a thermometer as your birth control method of choice? Because you could, thanks to the new NaturalCycles fertility app — and as long as you use it properly, it’s both 100 percent natural and 99.9 percent proven to work.

Fertility awareness, also known as natural family planning or the rhythm method, isn’t exactly a new form of birth control; it’s been around pretty much since the beginning of time itself, with some big discoveries in the first couple decades of the 20th century contributing greatly to its scientific development (thanks, Wikipedia!). It’s not even the first time technology has appeared on the scene that can help identify when you’re more or less fertile; I remembered vividly enough reading Justine Garrett’s several-years-old piece on The Hairpin about her experience using the Lady-Comp, for example, that I was immediately reminded of it as soon as NaturalCycles floated into my orbit. NaturalCycles looks like it might be the most technologically advanced version of fertility awareness we’ve ever seen, however, making it pretty innovative.

Here’s how fertility awareness works: You probably already know that there are only a few days per menstrual cycle when a woman can actually get pregnant. Assuming, for example, that you have a 28-day cycle, ovulation — when the egg is released from the ovary — happens around day 11, opening the window of fertility; if the egg hasn’t been fertilized by sperm by the time it reaches the uterus around day 21, it breaks apart and closes the fertility window. Then you start shedding your uterine lining on day 28, starting the whole cycle over again. The thing is, though, most women don’t follow a regular 28-day cycle, which has traditionally made fertility awareness a little tricky to master.

However, your body presents a bunch of signs right when it’s about to ovulate — signs which NaturalCycles helps you identify, thus accurately allowing you to predict when it’s safe to have sex without protection and when it isn’t. According to Arctic Startup, though, it’s a little complicated, so if you’re going to use it, you reeeeeeeally have to make sure you’re on top of your stuff:

First, you have take your temperature with the NaturalCycles thermometer right after you wake up each morning — and I do mean as soon as possible. Basal temperature starts to rise the moment we open our eyes, so in order to get as accurate a reading as possible, you’ve got to take the measurement right away. Beware, too, that not sleeping enough, drinking too much booze, or getting sick can cause irregularities in body temperatures, so if you’ve got any of that going on, don’t submit it or you’ll end up with corrupt information and false results. You also have to take an ovulation test on the days before you expect your ovulation to occur using special strips. Then you plug all that data — temperature measurements and ovulation test results — into the app and let the app’s algorithm work its magic. It’ll tell you which days you’re more fertile versus which ones you’re less, with red meaning it’s fertility window time and green meaning you’re good to go, re: no unexpected pregnancies.

Me? I’m not sure I’d be super into NaturalCycles; I’ve always considered fertility awareness an awesome, non-hormonal, and cost-effective ($59.90 for a year’s worth of access to the thermometer and the app) option, but not one I’d necessarily want to rely on myself. There's just too much margin for error. (Then again, I also thought I’d freak out about not having a monthly period as a side effect of using an IUD, which has happily turned out to be not the case, soooooo… you never know.) For what it’s worth, NaturalCycles was developed by a couple of physicists who wanted to make non-hormonal birth control a) easy and b) less reliant on guess work, so I have faith that it does what it says on the box. It’s also worth noting, though, that fertility awareness can only help prevent pregnancy. STIs are still a concern if you’re not using a condom, so before you decide to get all gung-ho about NaturalCycles (or the Lady-Comp, or whatever), make sure both you and your partner have clean bills of health first. And don’t forget to get tested regularly!

More like this
The 5 Best Pillows For Acid Reflux, According To A Sleep Expert
By Maria Cassano
7 Dos & Don'ts To Follow For The December 2022 Full Moon
By Brittany Beringer
Here's How To Support Jewish People Amid Rising Antisemitism
By Hannah Orenstein
The 10 Memes That Defined 2022
By Alexis Morillo
Get Even More From Bustle — Sign Up For The Newsletter