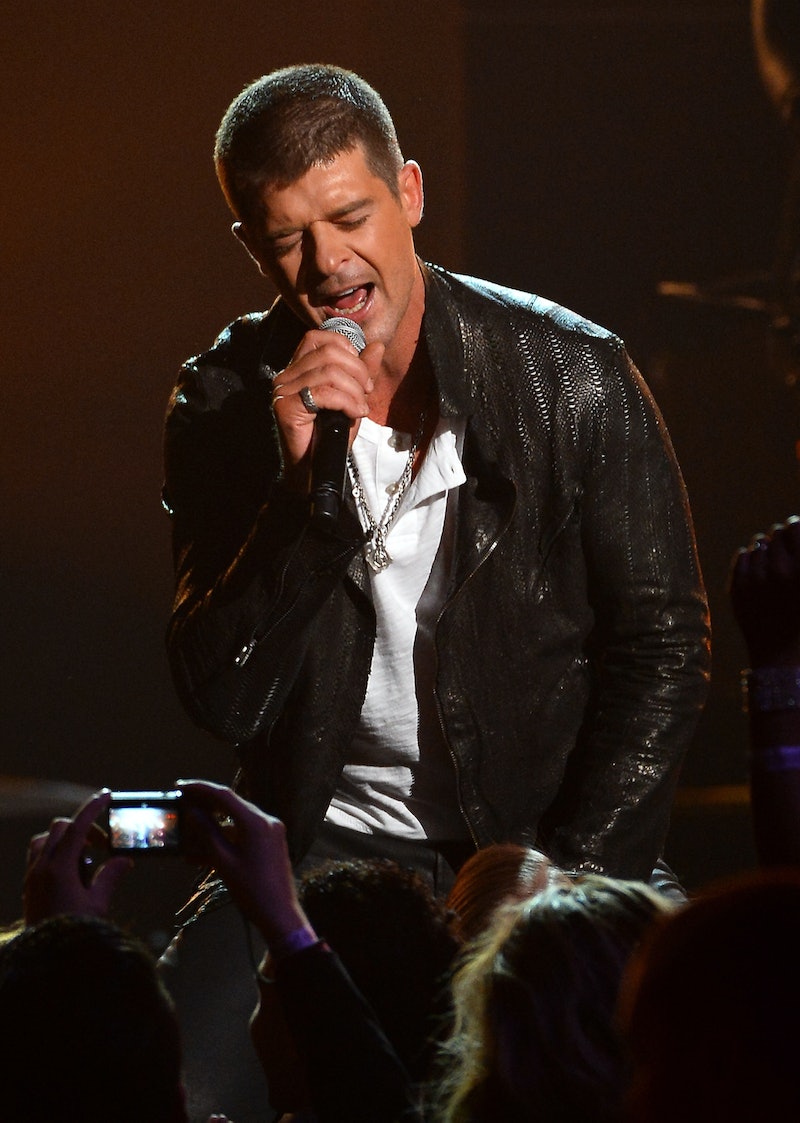 We have all been in that creepy post-breakup phase. And anyone who says they haven't is a liar, but most of us even have the grace to admit that we become obsessive, freaky and probably a bit unhygienic in that period of time after the split but somewhere before acceptance. It's when we "just happen" to show up at places our exes might be, because although we aren't usually stalkers, there's something intoxicating about the chance and besides, this was our favorite coffee place too. We turn into Carrie Bradshaws post-Big, where we talk our friends to death saying the same things over and over again as they lovingly consider bludgeoning us in the face with the nearest object to make it stop. People get creepy after break ups, and it's just a fact of life, one that eventually becomes funny (well, as long as the creeping didn't get too creepy, as in illegal). But then there's Robin Thicke.

Although it isn't surprising that the man who inspired the massive "Blurred Lines" objectification-of-women brou-ha-ha is going to new and unforeseen depths of creepiness to win back ex-wife Paula Patton's heart, it is still a revelation that the man who embodied 2k13 summer creepin' is back at it again, and in a whole different way no less. What do you do when your high school sweetheart and wife for nine years leaves you? For most of us, that would be taking a Valium, drinking a lot and watching 27 Dresses over and over again while weeping (or maybe it's just me on that one.) But for Robin Thicke, this was not enough. No, he has named his new album "Paula" because subtlety, and his first single is, you guessed it, "Get Her Back." Because nothing says "let's get back together!" Like having to hear your weepy ex-husband singing desperately to you on every radio station for the entire summer.

In honor of Robin Thicke and his sincere creepiness, here is a list of creepy things that are still significantly less creepy than the fact that he named his album after his ex-wife to impress her. Enjoy.

There are so many unsettling things about Courtney Stodden. There's her confusing music career, that casual marriage to Doug Hutchison at the ripe old age of 16 and her porn-tastic style. However, no matter how many education sex tapes she makes, and no matter how many utterly mediocre singles she puts out, her life is still not as sad as Robin Thicke trying to win back Paula Patton with an album all about how he needs her.

There is something deeply sad and totally unsettling about seeing a dirty stuffed toy lying on the side of the street. It makes you wonder about what could happened to make some child drop their beloved toy. However, they're still not as creepy as Robin Thicke because at the end of the day, they're still inanimate and they will never show up singing love songs at your window in the middle of the night (as Robin Thicke might).

They're so fascinating, but god forbid you step in one, you are reminded that despite how pretty and floaty they looked in that amazing bit of the aquarium, beached jellyfish are nasty and also kinda terrifying. But not as terrifying as it would be if you found out that your famous ex-husband wrote an entire album to get you back.

There you are, enjoying your day at the spa. You head into the sauna, to clear your pores/sweat yourself to death and ...there he is. A man who looks like your great-uncle, except he isn't your great-uncle and he is in a tiny bathing suit and he is staring at you so intently you feel almost sure you aren't actually wearing a bathing suit or towel. And yet...at least he isn't going to follow you home and continue making attempts to win your heart for at least six months after you leave the spa, right?

That Robot That Passed The Turing Test

Robots, will they one day come to rule us? Will we become slaves to automated machines who run our lives? Even if that does happen, stiiiiill not as creepy as the whole album-called "Paula" thing.

It's alllll fun and games owning a cat, until you wake up at 3 in the morning to find their face barely inches from your own, and you suddenly recall that old wives saying that cats sit on your chest to steal your soul. Your cat-pal/life companion/ possible cause of your eventual death sitting on your chest sitting vigil over your wind pipes is still less creepy than Robin Thicke's new album. Probably because it's furrier.

You know for a fact you've never met this person before but somehow they know all about how you went to Coachella and they're weirdly aware of the fact that your favorite book is To Kill A Mockingbird. This cannot be coincidence, this is totally creepy. Buuuut, you guessed it, still not as creepy as Robin Thicke naming his album after his ex-wife and writing it all about his ex-wife because you will not, in all likelihood, have parented a child with this person who you now have to see regularly as part of a custodial arrangement.

He looks every bit as creepy as he is, so there really shouldn't be any surprises here.

This makes his name, Julian Fuego Thicke, sound like the name of a Will Ferrell character in some very poorly scripted comedy whose biggest jokes are probably based on poop. Creeeeepy.

More like this
Jennifer Lopez & Ben Affleck’s Officiant Spilled The Tea On Their Wedding
By Sophie McEvoy
TikTok's "Triangle Method" Technique Is The Key To Better Flirting
By Carolyn Steber
My Partner Wants Me To Wear A Diaper During Sex. Help!
By Sophia Benoit
18 Hinge Prompt Answers To Try If You’re Looking For Something Casual
By Lexi Inks
Get Even More From Bustle — Sign Up For The Newsletter
From hair trends to relationship advice, our daily newsletter has everything you need to sound like a person who’s on TikTok, even if you aren’t.