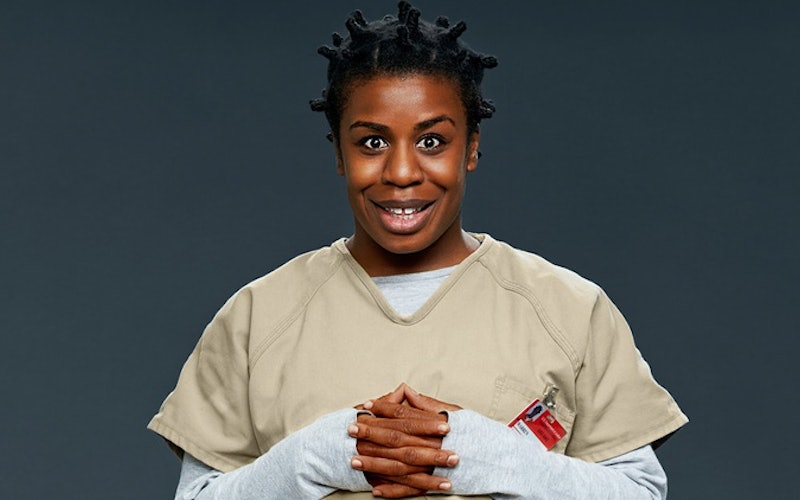 Just when I thought there was literally no way I could love Orange Is the New Black any more than I already do, now OINTB will be handing out free fruit-filled pies throughout New York City. That's right— the awesome show you've been obsessively streaming from the comfort of your own bed is now giving out free desserts from a sweet new food truck called "Crazy Pyes," named, of course, for the pie-slinging stalker who inspired the idea in the first place.

Interested? Of course you are. And if you live in New York, it couldn't be easier to try the Taystee treats (See what I did there?) for yourself. Not only will the truck's location be posted on the official OITNB Twitter, People.com has also provided a handy list of planned stops for Crazy Pyes!

Catch the truck at:

This isn't the first time a food truck has been used as a marketing stunt for a TV show. New Yorkers might also remember the absolute madness that the Bluth Frozen Banana Stand caused shortly before the Netflix premiere of Arrested Development Season 4. House of Cards did a "Freddy's BBQ" truck as a way to sway Emmy voters, and Inside Amy Schumer had a Season 2 promotional Finger Blasters truck stationed on NYC's Union Square.

As a fan of both TV and food, I am a huge proponent of this trend continuing. Here are 7 other ideas for TV show-based food trucks I'm hoping to see hitting the streets soon!

Considering that there was an episode of Bob's Burgers that was actually about food trucks, it seems crazy to me that this hasn't happened yet. I'd love to know what a burger from Bob's Burgers (the restaurant, not the show) actually tastes like, and I'd love it even more if they had a real-life Tina on board.

In honor of the drinking-est, smoking-est show on television, it seems only fitting that the Mad Men truck should be a bar on wheels, complete with Manhattans and cigars.

Realistically, a 24 food truck would serve all-American, patriotic fare, but I am enamored of the idea that instead they'd serve Jack Bao-ers. Catch this truck quick before it disappears for another five years, only to show up again when no one cares about it.

What the truck serves would have to change for every season, but for Season 1, the truck should obviously serve Flagels. Why? Because time is a flat circle.

In honor of the one and only Ron Swanson, this is a truck where, no matter what you order, you are given all the bacon and eggs. Preferably served by a pretty, dark-haired woman.

You might think I'm about to suggest a truck that serves something from the Game of Thrones cookbook, but if the producers of Game of Thrones were to give us anything, it should be cookies, by way of apology for the deaths of so, so many characters.

Um... don't eat anything off the Hannibal truck.

More like this
At 28, Prue Leith Was In A Secret Affair & Sharing Apple Pie With Stoned Neighbors
By Grace Wehniainen
Everything To Know About 'Firefly Lane' Season 2 Part 2
By Gretchen Smail
The 'Firefly Lane' Book Ending Teases Way More Tears To Come In 2023
By K.W. Colyard
Everything To Know About 'The Peripheral's Potential Season 2
By Brad Witter
Get Even More From Bustle — Sign Up For The Newsletter