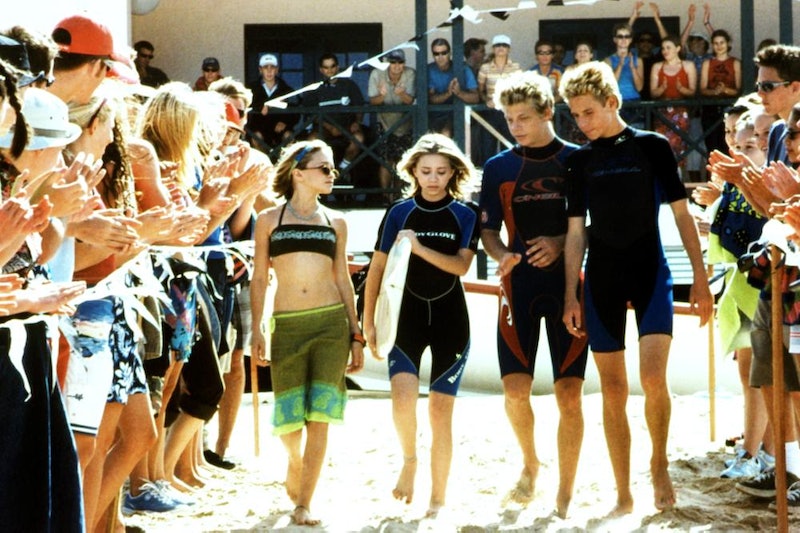 Mary-Kate and Ashley Olsen, probably the most famous twins in modern history, turned 28 Friday. They were the center of their own empire from the time they were toddlers, and the Olsen twins' somewhat unique legacy lives on even as the sisters themselves move farther and farther away from the hordes of direct-to-VHS wonders they brought to the world. Of the 13 feature films their company Dualstar produced, though, the one we really need to remember on their birthday is Our Lips Are Sealed.

Our Lips Are Sealed was irreverent, hilarious, colorful, and endlessly puzzling. It broke the fourth wall frequently, acquainted us with 1960s fashions in 21st century interpretations, and was very educational (if that's the word) when it came to Australian culture. All in all, it's a film that's stuck with us throughout the 14 years since its release in 2000.

On this hallowed day of Olsen celebration, there's really no better way to honor their iconicity than to look back at one of their most bizarre and delightful pieces of work. So here are some of the things we loved the most about Our Lips Are Sealed:

It taught us how the witness protection program works

It (Supposedly) Had Life Or Death Stakes

It was always highly unlikely they'd ever really hurt an Olsen in an Olsen twins movie — or anyone, for that matter — but it made for some good underlying drama that there were a bunch of scary men in search of our hip tween girls.

As such, it (almost) had a dash of moral complexity

It definitely had some great fashion

Not gonna lie, we still kind of want these mod outfits.

Did we mention it broke the fourth wall beautifully?

God, what a great movie.