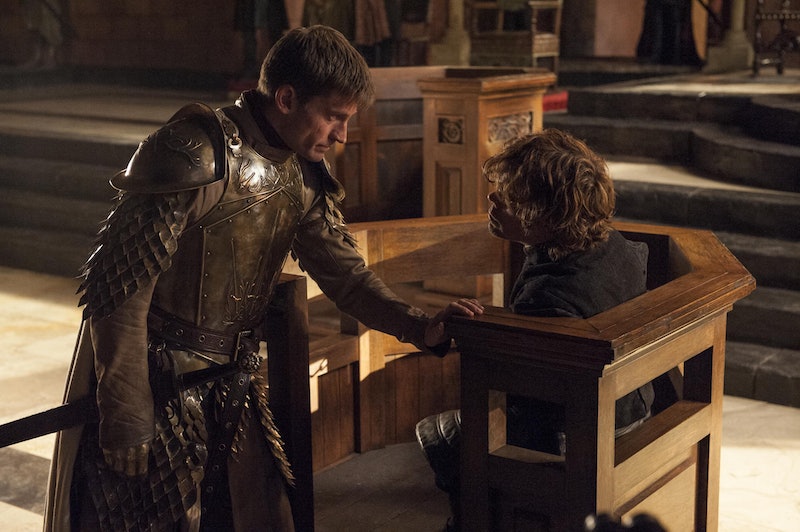 It's happened: The epic murder from the books finally went down. Game of Thrones fans feared Tyrion would die, but his brother Jaime helped him escape and before he vanished, Tyrion killed his father Tywin (and his ex-lover Shay). And to make matters even more appropriate, Tyrion shoots his father in the most appropriate way possible: while Tywin is sitting on the toilet.

"You've always wanted me dead," he whispers right before telling Tywin that he loved Shay and that he murdered her with his own hands because his father had sullied her and turned him against her. Tywin keeps insisting that Tyrion is his son, but Tyrion says the obvious: Tywin sentenced him to death even though he knew he didn't kill Joffrey, how could he really be Tywin's son? Tywin seems to miss the point (how dumb are you, you bastard?) and keeps referring to Shay as a "whore" and Tyrion as "my son," but Tyrion has had it. He shoots Tywin once, giving him a short chance to speak his last words before shooting him again.

Ding, dong, the Tywin is dead. The only question is, with The Hound wasting away on a hill top, Tywin Lannister dead on the toilet, and Jaime gone all nice again, who are we supposed to hate now? I guess we could turn our anger towards Melissandre?