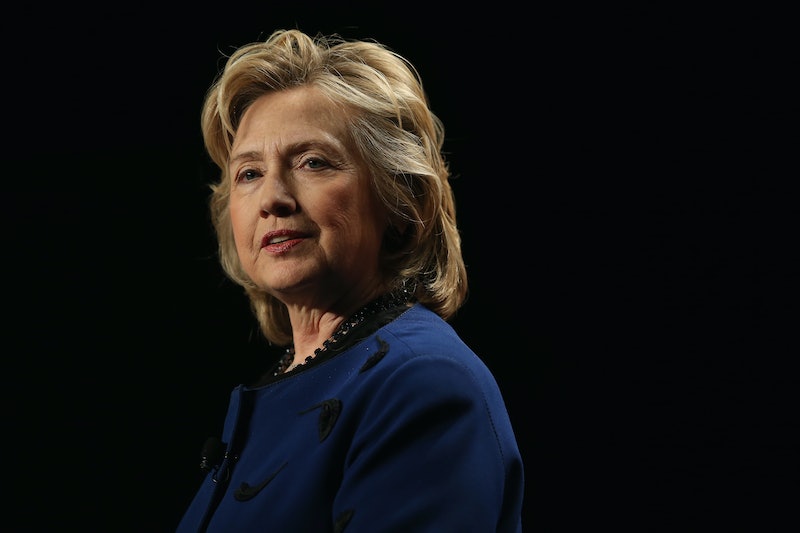 Hillary Clinton: Former Secretary of State, potential 2016 presidential candidate, definitive badass. For the past several years, the better half of the dynamic Clinton duo has made us wonder, "How does she do it all?" Maybe by shopping at Costco, where Clinton ran into fellow incredible woman Sonia Sotomayor on Saturday. What we wouldn't give to have been a fly on the wall for that one...

Clinton's mile-long resume includes being the first woman to be made a full partner at Rose Law Firm, serving as the first woman on the Walmart board, and being named Arkansas' Woman of the Year in 1984. But Hillary Clinton, despite being one of the most incredible women to have ever graced planet Earth, is in many ways, just like you.

Of course, not everyone can be the first First Lady with a postgraduate degree, a noteworthy independent professional career, and a personal office in the West Wing. And most of us don't have the opportunity to make major policy decisions from Arkansas' governor's mansion, much less the White House. But there is much more to Hillary Clinton than her political accomplishments — she is also a wife, a mother, a soon-to-be grandmother, and most importantly, a person, just like us.

Check out these prime examples of times that Hillary Clinton proved that she is, unbelievably, just like the rest of the world.

She watches House of Cards

OK, how could this not make you love her more? While she and Bill Clinton should never aspire to be the real-life versions of Frank and Claire Underwood, the idea of the former First Couple curled up watching Netflix is pretty adorable. In an interview with People Magazine, Clinton claimed to have "totally binge-watched the first season of ‘House of Cards.’" We guess for some people, art really does imitate life. The Clintons must be anticipating season three as much as the rest of us.

She was a girl scout

While it may be difficult to picture Clinton peddling Thin Mints instead of pushing a bill through Congress, the young Hillary was, indeed, a girl scout. Growing up in Park Ridge, Illinois, Clinton was raised to respect and assist her community, which led to her involvement in such activities as the girl scouts, food drives, and student government.

She's made mistakes, and admits to them

While many politicians would rather have their teeth pulled than recognize their mistakes, Clinton seems to appreciate the value in taking responsibility for her missteps. In her latest book, Hard Choices, Clinton addresses her vote to support the ill-fated Iraq war, saying that it was a mistake, "plain and simple." Clinton's vote in favor of the war was a major point of contention in the 2008 presidential race, as Obama claimed to have opposed the war from the start.

She owes everything to her mom

Clinton made her vast respect for her mother very clear in her 2003 book, Living History. Clinton's mother instilled feminist ideals in her at a very young age, telling her "You have to stand up for yourself. There's no room in this house for cowards." Clinton has cited her mother as a major inspiration on numerous occasions, notably in a 2008 debate, when she praised her hero as a woman "who never got a chance to go to college, who had a very difficult childhood, but who gave me a belief that I could do whatever I set my mind [to]." And look where that has taken her.

So much so that Slate was compelled to write an article entitled "How Hungry is Hillary Clinton?" And they unearthed some delectable details about Clinton's culinary cravings. Clinton told the Associated Press in 2007 that her favorite hometown food was the Oliveburger, which has since been renamed the Hillary Burger.

The Greek diner in Park Ridge, Illinois remains in business, and for $6.75, you can get a Hillary Burger for yourself. And although Clinton certainly knows how to appreciate a good burger, Walter Scheib, the Clintons' White House chef, told Slate that Clinton was also a big fan of Boca Burgers, a vegetarian's answer to beef burgers. Clinton has also been known to chow down on ice cream, barbecue, and hummus, proving that her food tastes are about as multifaceted as she is.