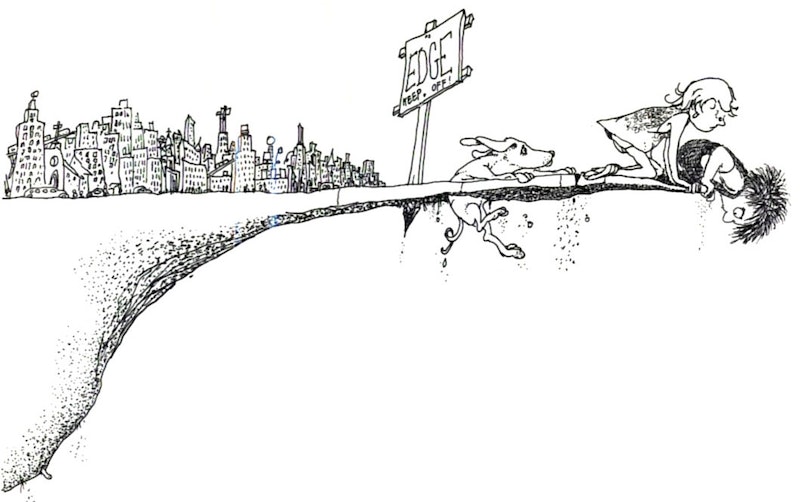 Ten years after his heartbreaking children's book The Giving Tree was published, Shel Silverstein's editor Ursula Nordstrom at Harper & Row convinced the author to write a book of poetry. In 1974, Silverstein released Where the Sidewalk Ends, and dedicated it, quite literally, "For Ursula."

He was never a poetry man, he says himself. But that was why he was so good at it. His quirky, conversational style, coupled with his line-drawing cartoons, became beloved among both children and parents.

Even Johnny Cash fell for Silverstein's style. Fun fact: Silverstein won a Grammy in 1970 for writing the poem "Boy Named Sue," which, of course, Cash sang in California's San Quentin State Prison in 1969. It became one of his biggest hits.

In a 1975 interview with Publishers Weekly, Shel Silverstein talked about how he fell into working as a cartoonist and an author.

When I was a kid—12 to 14, around there—I would much rather have been a good baseball player or a hit with the girls, but I couldn't play ball. I couldn't dance. Luckily, the girls didn't want me. Not much I could do about that. So I started to draw and to write. ... By the time I got to where I was attracting girls, I was already into work, and it was more important to me. Not that I wouldn't rather make love, but the work has become a habit.

While The Giving Tree still consistently ranks above it on lists of the top children's books of all time, Where the Sidewalk Ends will always hold a place in the hearts of kids, and grownups.

What makes Where the Sidewalk Ends so great?

Silverstein never talked down to us as children. He addressed real childhood concerns, and he took them seriously — albeit in a completely fanciful manner.

Take for example, a child who all day listens to his parents, his teachers, his older siblings, his babysitter, and on and on:

Listen to the MUSTN’TS, child,

Listen to the DON’TS

Listen to the SHOULDN’TS

The IMPOSSIBLES, the WON’TS

Listen to the NEVER HAVES

Then listen close to me—

Anything can happen, child,

Silverstein was an inspiration to kids, someone who could talk to us in our language and then whisper secrets that maybe our elders didn't always tell us. And he beckoned us into his words with a poem at the start.

He made us feel like we were a part of something by listening to what he had to say.

If you think you Shel can't relate to the single dating scene at our age, just read this gem:

If you want to marry me, here's what you'll have to do:You must learn how to make a perfect chicken-dumpling stew.And you must sew my holey socks,And soothe my troubled mind,And develop the knack for scratching my back,And keep my shoes spotlessly shined.And while I rest you must rake up the leaves,And when it is hailing and snowingYou must shovel the walk...and be still when I talk,And-hey-where are you going?

And it's even more clear as an adult the magic that Silverstein has in his poetry, and how true his words can ring. Without seeming like it, he can give you little life lessons inside his silly words.

And Silverstein was able to do this all with poetry — which many might argue is not generally the most accessible literary medium. But his unique style and his willingness to break the existing "rules" really shows how clever poetry can be.

Reading Where the Sidewalk Ends as a child (hopefully) opened your eyes to poetry as an adult. Instead of giving blurbs of the following selections, I'm going to quote pieces of the poetry included, and you all can decide for yourself if you'd like to dive in further.

I saw the best minds of my generation destroyed by madness, starving hysterical naked, dragging themselves through the negro streets at dawn looking for an angry fix, angelheaded hipsters burning for the ancient heavenly connection to the starry dynamo in the machinery of night, who poverty and tatters and hollow-eyed and high sat up smoking in the supernatural darkness of cold-water flats floating across the tops of cities contemplating jazz, who bared their brains to Heaven under the El and saw Mohammedan angels staggering on tenement roofs illuminated, who passed through universities with radiant cool eyes hallucinating Arkansas and Blake-light tragedy among the scholars of war...

2. The Dream Songs by John Berryman

Life, friends, is boring. We must not say so.After all, the sky flashes, the great sea yearns,we ourselves flash and yearn

3. A Coney Island of the Mind by Lawrence Ferlinghetti

I once started outto walk around the worldbut ended up in Brooklyn,that Bridge was too much for me.

There once was a millerwith a daughter as lovely as a grape.He told the king that she couldspin gold out of common straw.The king summoned the girland locked her in a room full of strawand told her to spin it into goldor she would die like a criminal.Poor grape with no one to pick.Luscious and round and sleek.Poor thing.To die and never see Brooklyn.

5. Diving into the Wreck by Adrienne Rich

As it turns out, there is a wrong way to tell this story. I was wrong to tell you how multi-true everything is, when it would be truer to say nothing. I've invented so much and prevented more. But I'd like to talk with you about other things, in absolute quiet. In extreme context. To see you again, isn't love revision? It could have gone so many ways. This just one of the ways it went. Tell me another.

7. My Life by Lyn Hejinian

Drinking Shirley Temple with my Mary Janes on, let's say that every possibility waits