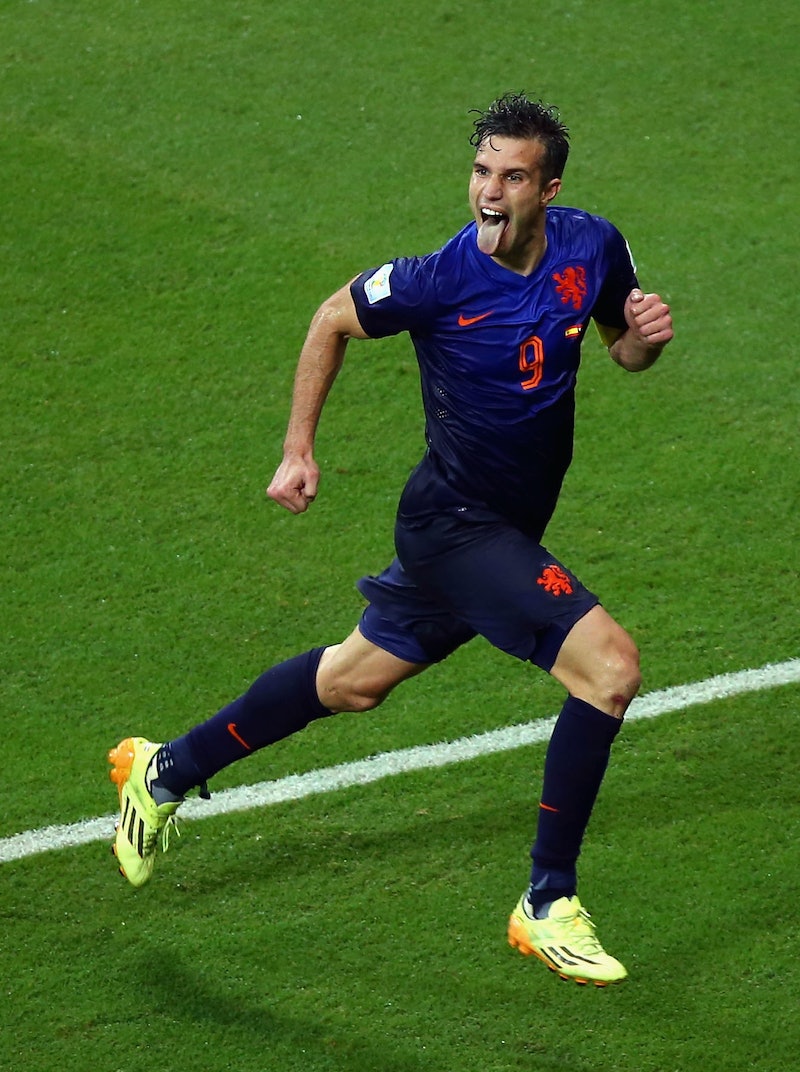 In the second day of the 2014 FIFA World Cup, one man really made a name for himself for people who don't usually follow soccer, and continued living up to his name for people who do. I'm talking about Robin van Persie who scored two of the Netherlands' five goals in their first 2014 World Cup game versus Spain. Of course, this raised interest in van Persie — he trended on Twitter, that's sort of a big deal — so we've decided to answer one of the questions you may be pondering about the Dutch soccer star: Are you going to one day end up dating van Persie and find yourself on awesome international excursions while he player soccer? Too specific? Fine. Does Robin van Persie have a girlfriend? Nope! He's married!

Van Persie is married to Bouchra van Persie and has been since 2004. Bouchra is of Moroccan and Dutch descent and works with London charities (her husband plays for England's Manchester United when he isn't playing for the Dutch national team) and is part of the "Manchester United WAGs charity group." (I'm thinking it might have another, more official name.) The van Persies have two children: a son, Shaqueel, and daughter, Dina.

Bouchra also can sing pretty darn well. (As for what else is happening in the video, you'll need to speak fluent Dutch to know.)

There isn't a ton of information on Bouchra available and she hasn't been active on Twitter since 2012. (In today's world, do you even exist if you haven't tweeted for two years?) But here's some photo proof that Bouchra van Persie is very real:

If you'd like to root for the same team as Bouchra, be sure to tune in when the Netherlands takes on Australia on June 18.

More like this
Princess Charlotte Helped Her Dad Film An Adorable Video For Euro 2022
By Grace Wehniainen
Lewis Hamilton Turned Down A Role In 'Top Gun: Maverick' For This Surprising Reason
By Darshita Goyal
Harper Teasing David Beckham’s Dad Dancing Is Beyond Adorable
By Frances Stewart
The Spice Girls & Adele Lead Girl Power Celebrations For Lionesses’ Euros Win
By Sophie McEvoy
Get Even More From Bustle — Sign Up For The Newsletter