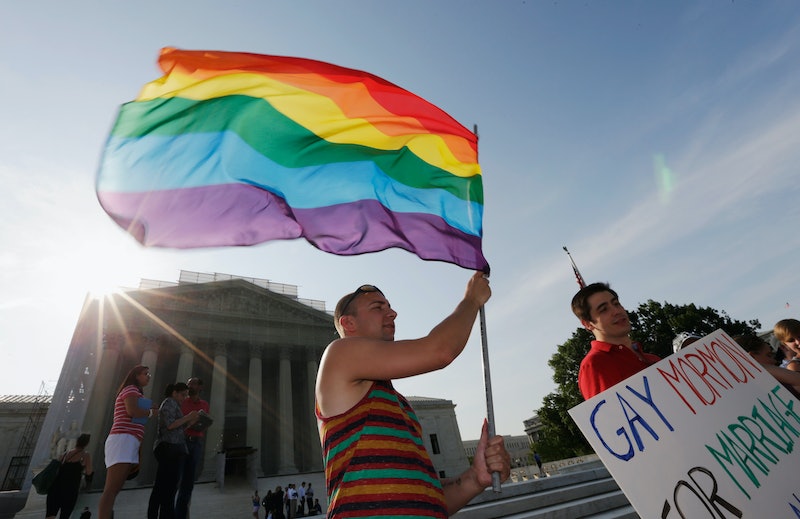 On Monday, President Obama sent a strong message that he'll work to defend LGBT rights, even if Congress won't. A senior White House official announced that Obama is drafting an executive order against LGBT-related workplace discrimination. The order comes after many years of Congress trying to pass the Employee Non-Discrimination Act (ENDA), which seeks to protect employees from being harassed or fired based on their sexual orientation or gender identification.

ENDA has been bouncing around Congress since 2009, and Obama's executive order is a way to put pressure on Congress to move forward. Despite growing support from Republican members of Congress for ENDA, House Speaker John Boehner (R-OH) has said he thinks the act is "unnecessary." Boehner has said that the act "would provide a basis for frivolous lawsuits," and that "people are already protected in the workplace."

The Williams Institute has estimated that the protections afforded by ENDA could protect an additional 16 million workers. So, no Congressman Boehner, people are not already protected in the workplace.

In the face of Congressional gridlock, Obama is drafting an executive order outlining protections to LGBT people in the workplace. The protections are largely the same as the ones in ENDA; job discrimination based on both sexual orientation and gender identity is forbidden. Obama's decision will likely be a popular one, and bring clarity to the situation regarding LGBT protection in the workplace.

According to the Human Rights Campaign, 68 percent of Americans support legislation to protect LGBT discrimination, and numbers among Republicans are growing as well, with 56 percent of Republicans in favor of such legislation. However, the issue still remains a bit muddled, as 75 percent of Americans "incorrectly believe it is currently illegal under federal law to fire or refuse to hire someone because they are gay, lesbian, bisexual, or transgender," according to the Public Religion Research Institute.

The news of Obama's decision was broken by Valeri Jarrett, senior advisor at the White House. Jarrett tweeted about the decision to draft the order on Monday at noon.

Millions of LGBT Americans go to work every day fearing that, without any warning, they could lose their jobs -- not because of anything they've done, but simply because of who they are. It's offensive. It's wrong. And it needs to stop, because in the United States of America, who you are and who you love should never be a fireable offense.