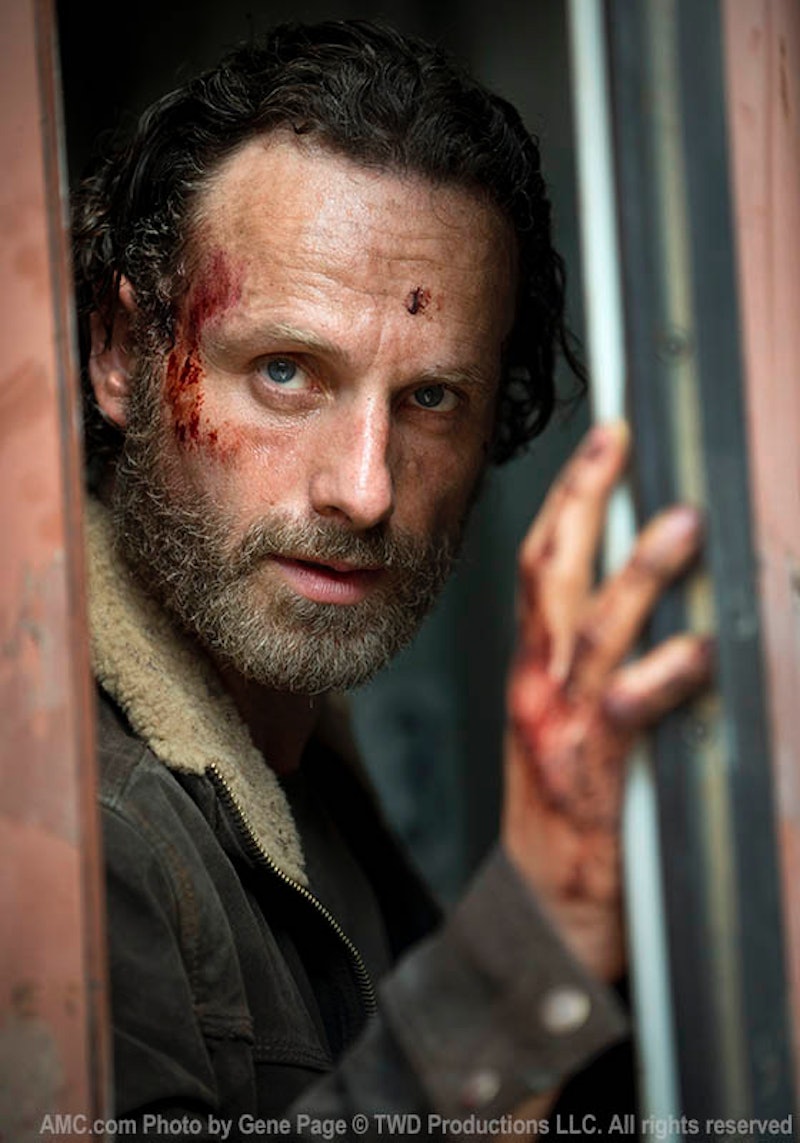 There are four months standing between Walking Dead fans and the Season 5 premiere. That means there is plenty of time to postulate about Walking Dead plot points, deaths, and great catchphrases that will undoubtedly arise from the premiere, whose specific date will be released at Comic-Con. AMC has already joined in the speculative fun, by allowing the producer and writer of The Walking Dead to drop cryptic hints about the season opener. Robert Kirkman, the writer of both Season 5 and the Walking Dead comics, has already hinted that death is "always extremely likely," and has said that the premiere will "hit the ground running for Season 5."

The producer, newly-promoted Jolly Dale, reemphasized the awesomeness of the opener, saying that it would be "by far the biggest episode that we’ve ever done. So, getting it all together to make it come off as good as we want has been a huge task, but it’s going to be amazing."

With these crumbs of information thrown to fans, it seems that the Walking Dead creators are ramping up expectations for a spectacular premiere episode, and in all likelihood, the best premiere yet. While the pilot will always have a special place in Deadheads' hearts as the start of it all, it didn't have the kind of set-up Season 5 will build from. The fourth season had quite a few boring moments, especially the penultimate episode and all of the walking-on-the-train-tracks-and-surviving bits. Luckily, since the crew has reached Terminus, the floodgates of possibility have opened. The Season 4 finale made Walking Dead history by keeping all the characters alive, a first for the series. However, that means that someone is probably going to die the second Season 5 begins. And since it has already been hinted that Terminus could contain the cannibals from the comics, there could easily be a massacre in the first five minutes of the premiere.

Although fans should be able to postulate death scenarios for every character in the four months leading to the Season 5 release, there are also great reasons why this premiere will top even Seasons 2 and 3. First of all, the writer and producer both seem pretty jazzed about the premiere of a show that tanked with the critics (and some fans) last season, which suggests that they went back to the undead drawing board. Season 2 was marked by the firing of the entire writing staff from Season 1, making the opener a tense combination of hope, anxiety, and eventually, bored acceptance of the new normal.

The next season premiere seemed to fall into a better groove, but nonetheless, there still seemed to be more talking than bloodthirsty walkers, making it slightly lackluster compared to the killer Season 2 finale. Nonetheless, Season 5 is going to have some blood-caked shoes to fill if it will truly be the best premiere (or best episode) us post-apocalyptic viewers have seen. But given the crew's optimism and the room for growth from Season 4, it's possible that the Ricktatorship will return, Terminus will be full of psychopathic cannibals, and we'll all have to look at the flowers once again.