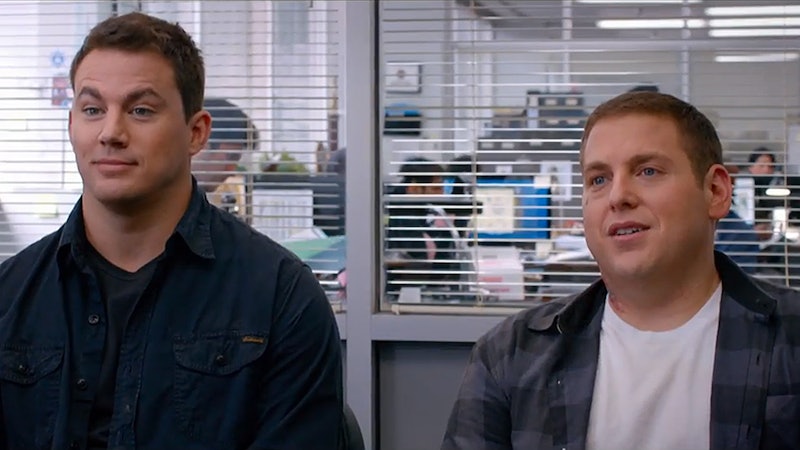 Talk about bad timing! Jonah Hill and Channing Tatum’s new comedy 22 Jump Street may have been a big success at the box office this weekend, but the film has faced some criticism for its “bromophobic” humor. To make matters worse, the movie also contains several ill-timed Maya Angelou references, as well as a brief Tracy Morgan joke. Prolific poet Angelou just passed away on May 28, while actor-comedian Morgan was the victim of a deadly car crash on June 7, which has left him in critical condition. If circumstances were different, these jokes may have been funny, but given the timing of recent events, they just end up making you cringe.

And it's not the studio's fault. It's not anyone's fault. This is just really, really bad timing. How could they have known? Here's what happened.

While working undercover investigating a college drug ring, Hill’s character Schmidt attends an open mic event on campus. In order to maintain his cover (you know, that he’s just a poetry lovin’ college student and not a 30-year-old cop), Schmidt decides to deliver an improvised slam poem on stage. From that point on, one of his friends refers to him as “Maya Angelou” throughout the film. The references might feel like they're coming a little "too soon," but a source reportedly told Yahoo! Movies that they're just "a tribute to the poet's greatness."

While introducing himself on the first day of class, a psychology professor at the college brags that he’s really good at impressions. To prove it, he busts out his Morgan impersonation for the lecture hall. It’s predictably terrible, and the class is unenthused. The joke was reportedly cut from the movie for its Los Angeles premiere out of respect for Morgan's industry friends.

Aside from the unfortunate timing of these jokes (…and the underlying current of homophobia that is present in several scenes), 22 Jump Street actually does have some pretty hilarious moments. Whether the good outweighs the bad, well, I’ll leave that decision up to you.