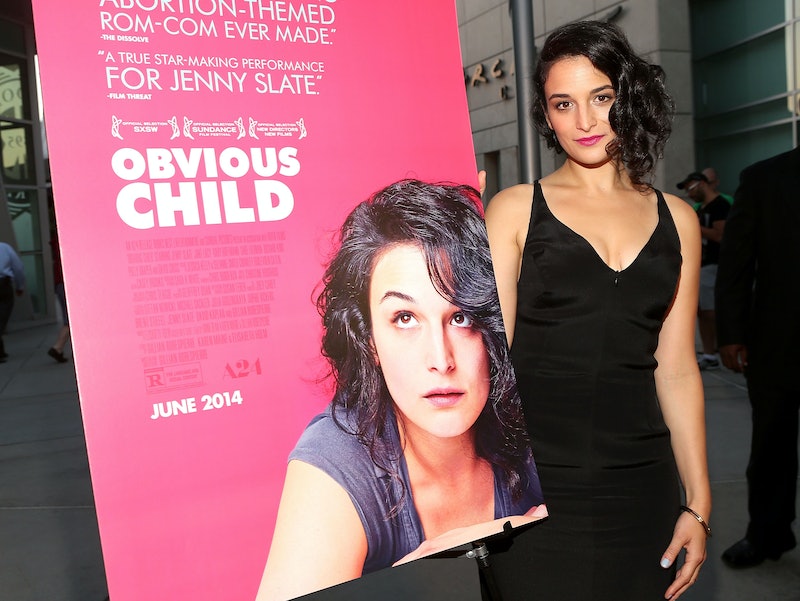 Jenny Slate is all the rage right now: her new movie, Obvious Child, is an indie darling already. But don't you wonder about the brief stint that Slate had on SNL all those years ago, a could-have-been tenure that was cut short by Slate dropping a very audible F-bomb in her first live sketch? Slate finally opened up about what really happened on SNL on the podcast Bullseye with Jessie Thorn; the story of the actual F-bomb is pretty cut and dry, but in the aftermath, Slate proved herself a true badass who was true to herself.

Apparently, Slate wrote the sketch in which the cussing went down: "I was so used to being a stand-up comedian, and I had written that sketch. I never thought of it as something I could make a mistake at," she said. And sure, stand-up is rife with cursing and dirty language that's not safe for TV; yeah, Slate should have been more up on her game on live television, not to mention, Saturday Night Live. But the F-bomb slipped, anyway.

According to Slate, her colleagues were truly understanding, sympathetic, and huggy (Andy Samberg and Seth Meyers did the hugging) and gave her some advice on how to deal with Lorne Michaels' disappointment. Slate didn't think that she was going to get fired, but to her shock, she was let go after the season. Slate says that Michaels told her, "I'm going to have to pull you back for a while... I don't want to make a big deal of this, but I don't want this to be the fist thing people ask about or write about with you." Ironic, I guess, because the anecdote has kind of shaped Slate's post-SNL career.

The greatest part, though, is how Slate just does not give a fuck, all these years later:

I wonder if I was a boy, if it would matter? I don’t think it would matter as much if I was a boy. I think because I was the new girl, then it mattered … literally, I don’t care. I don’t care that it happened. People should see a woman saying a swear word by mistake rather than seeing a sketch where two people get raped by a gorilla. I don’t understand why that’s more acceptable. Or all the sexist and racist stuff that’s, like, on Two and a Half Men. I don’t care at all. I don’t feel bad. And I’m not sorry, but I am sorry to myself for how I treated myself that year.

All valid points — fellow SNL-alum Jimmy Fallon was known for breaking all the time; had he been the one to swear on live TV, would he have suffered such similar consequences? Slate's unapology is amazing — at the end of the day, what was her crime? She said a four letter word on late-night television? I think the punishment did NOT fit the crime, and it seems like Slate agrees.

She notes that she is sorry for how she treated herself after she left SNL, and it's a reminder: even if you make a little mistake and are punished for it inordinately, you don't have to further punish yourself. Jenny Slate: champion of self-care, and not apologizing for stupid shit all these years later.

More like this
Kanye West Has The Most Kanye Reaction To Kim Kardashian & Pete Davidson's Split
By Jake Viswanath
Kim Kardashian & Pete Davidson Reportedly Broke Up After Dating For 10 Months
By Grace Wehniainen
Every Horror Movie Reference In The 'PLL: Original Sin' Premiere
By Alyssa Lapid
Naomi Osaka & Emma Raducanu’s Experiences Have Inspired A New Amazon Show
By El Hunt
Get Even More From Bustle — Sign Up For The Newsletter