If you’ve ever thought that your cat has a better life than you do… you’re probably right. Having your days consist of running around, chasing things, eating, and sleeping sounds kind of like the best existence ever. But hey, guess what? Even if you can’t magically turn yourself into a cat on cue, at least now you can have a taste of what it’s like to be one. Ladies and gentlemen, meet Catlateral Damage, the world’s premiere cat simulator video game!

Catlateral Damage was originally just a browser game run in the Unity engine, but it’s currently in the middle of a Kickstarter campaign to build it into a full release. According to its Kickstarter page, the game is “a first-person destructive cat simulator where you play as a cat on a rampage, knocking as much of your owner’s stuff onto the ground as possible. It’s a highly original, experimental concept…. Oh, and it’s based on a real-life mischievous cat!” It goes on to note that, like other first-person games, you can walk, look around, jump, and crouch; unlike other first-person games, though, your weapons are your teeny tiny little digital cat paws, with the goal being to knock as much stuff over as possible. Basically, you get to be this cat:

So why the Kickstarter? Although it might seem like there’s only so much havoc you can wreak in a game like this, you’d be surprised exactly how far things can go. I mean, Goat Simulator, which was released back in April, featured things like jet packs and the ability to transform into a Demon King:

Catlateral Damage probably won’t venture into Demon King territory, but according to its Steam Greenlight page, the new build will include more levels, more items to destroy, new gameplay modes including something called “Cat Ops,” better graphics and sound effects, achievements, and Oculus Rift support. I’m probably never going to own an Oculus Rift, but Catlateral Damage sounds like the perfect fit for it — and as for “Cat Ops?” Let’s just say that in my head, it looks like the Spec Ops series. With cats.

Is there something deeper at work inspiring all these weird-o animal simulator games? Maybe; as The Escapist’s Jim Sterling wrote about Goat Simulator at the end of March:

“Coffee Stain Studios is clearly having fun with the idea of knowingly selling a bad product. It proudly lists bugs as a feature, promising only to fix glitches that outright crash the game, leaving in everything else for hilarity’s sake. With its bizarre physics and distinct lack of structure, one could make the case that Goat Simulator has a point to prove, providing a savvy commentary on the state of video game design — not to mention the temptation of the modern game developer to make bizarre, ‘random’ experiences simply to appeal to YouTube’s Let’s Play creators. In fact, the cynic could easily argue that this game exists entirely to exploit that medium, while others may say it’s all done in the name of satire.”

Sounds about right… but who am I kidding? I just want to be able to run around and knock stuff over.

Check out Catlateral Damage’s Kickstarter video here, and head on over to its campaign page to donate. Because who doesn’t want the opportunity to be a cat for a day? 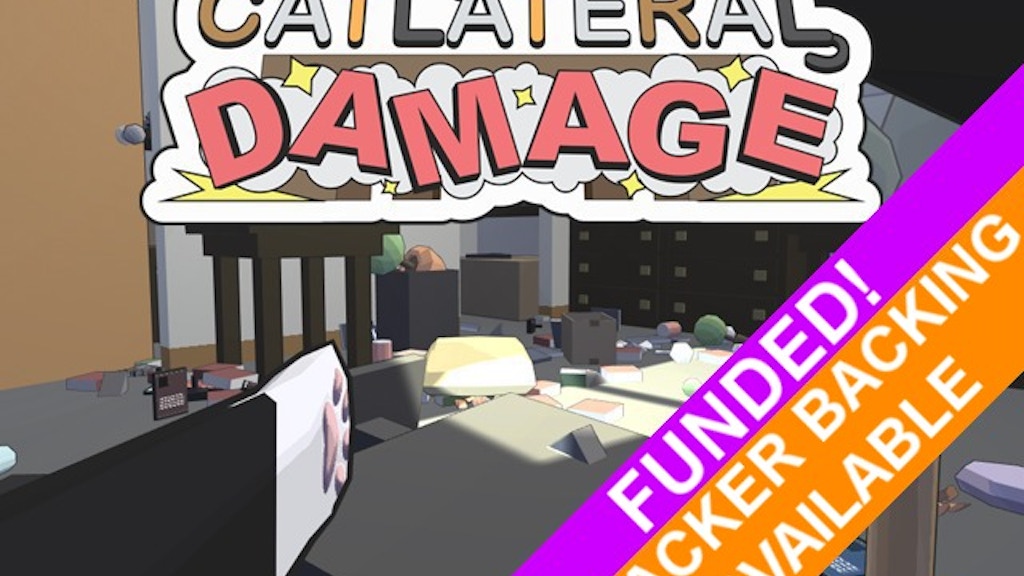