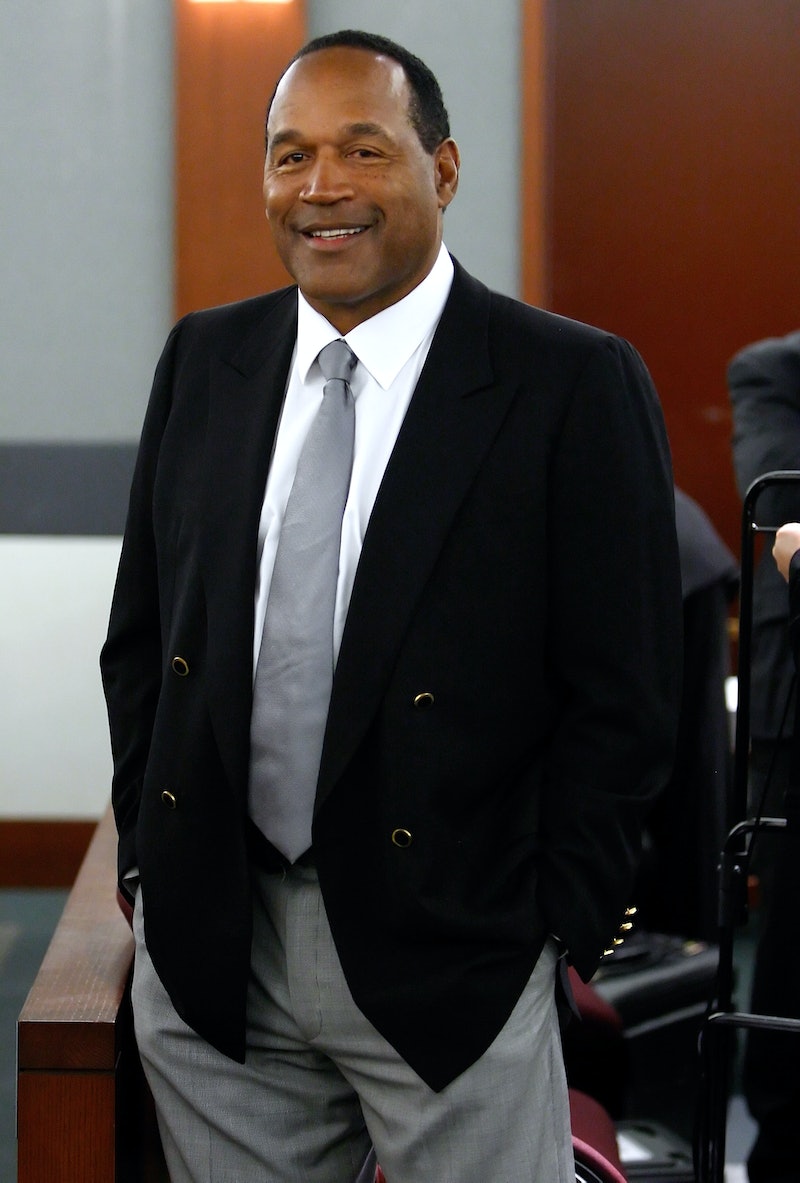 Twenty years ago Tuesday, O.J. Simpson led cops on a slow-speed car chase that lasted for two hours, and was watched by 95 million people. At 11 a.m. on June 17, 2014, an APB was put out on O.J., who had been missing since 1 a.m. that morning, according to his attorney. By 5 p.m. that afternoon the police said they had used "cellphone transmissions" to pick up Simpson's location — which at the time must have seemed like a pretty exciting use of technology. During the chase, Simpson drove a 1993 Ford White Bronco, a car that has come to be iconic.

Who was in the car?

Shortly into the chase, someone from the Ford Bronco dialed 911. The man on the phone did not identify himself, but police gathered from the car that he was Simpson's friend Al Cowlings, and that he was being held at gunpoint by Simpson. Simpson allegedly asked Cowlings to drive him to Simpson's mother's house. At this point in the chase, at least five black police cars were following the Bronco, but the vehicle Simpson was in continued at a rate of about three to four miles per hour.

How did the chase affect the American public?

The highway Simpson was driving on had been cleared of traffic, but cars had gathered on nearby highways and bridges, and people were actually stepping out of their cars to wave at Simpson. (We're surprised no one asked him for an autograph.)

About a half hour into the chase, local CBS news spoke with Vance Evans, a friend of Simpson's, who sounded teary and tired. "Everything is going against him right now," Evans said. "I just want him to know how much he's loved." A few minutes later, CBS got a call that showed just how much Simpson was loved. The caller identified herself as "Sue" from Chicago and, speaking at a rapid pace, made clear that she was a huge fan of Simpson's.

Sue said that even though she was "not black," she thought Simpson "has such great courage." Sue went on to say:

I don't have many heroes anymore, but there's always been on my coffee table a book about OJ Simpson... and it goes into his background about how he overcame a malformed leg, and it talks about the courage it has taken for him to overcome all these obstacles.

This is one of the weirdest portions of the car chase, and is indicative of the massive amount of attention the chase drew. After this call, one of the newscasters speculates that the white Bronco isn't heading in any specific direction, but is "just driving at this point."

What was OJ thinking?

As the chase neared its end, Detective Tom Lange was able to get in touch with Simpson on the phone. Lang says the police had Simpson's cell phone number, and decided to call him. "To my amazement, he picked up," Lange told Larry King in a subsequent interview.

The recording of the call was released to the civil jury, and most of it can be heard in this crazy recording. During most of the recording, Simpson is moaning loudly, and his words sound slurred. He repeats several phrases, namely, "I deserve to get hurt," and "all I did was love Nicole."

Throughout the call, Lange tries to get Simpson to throw his weapon out the window, but Simpson refuses. Simpson says, "I've got to keep you guys away from me. This is for me." To which, Lang responds, "Please, just toss it, you're scaring everybody." Simpson then says, "Aww, I'm not gonna hurt nobody... just tell them I'm sorry."

The call is bizarrely honest on both ends, and shows Simpson in an incredibly confused and vulnerable state. Lang stayed on the phone with Simpson until he reached his house, at which point Lange frantically tried to convince Simpson not to shoot himself.

As Simpson turned onto his street, he was met by a crowd of people. The news coverage of this moment is especially poignant. On CBS, newscasters express shock that Simpson is actually going home. "Oh my god," one of them says, "he's come home. After all of that."

More like this
Chloe Pirrie Is Ready To Take The Next Step
By Sam Ramsden
7 Things We Learned From Rebekah Vardy's First Post-WAGatha Christie Interview
By Sam Ramsden
What We Know About Where Caroline Watt Is Now
By Catharina Cheung
Dr. Anna Pou Is Still Practicing Medicine After Facing Murder Charges
By Brad Witter
Get Even More From Bustle — Sign Up For The Newsletter