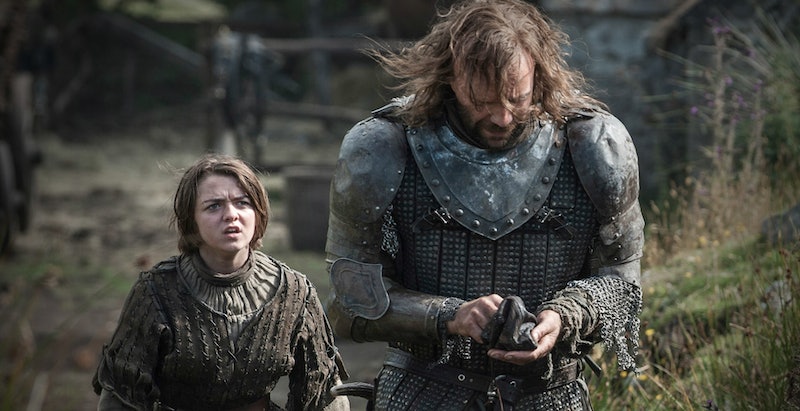 In the latest episode of Funny or Die's Gay of Thrones , things take a dramatic turn when the author of A Song of Fire & Ice, George R. R. Martin, shows up to conclude the season's recapping in an homage to The Princess Bride. The weekly web series follows a gay hairdresser and his clients as they attempt to recap the week's episode. Here are some highlights from "The Children" — and of course, spoilers below.

Tywin Lannister finds out Jaime and Cersei are having sex: "Papa Lannister gets smacked in the face with a big ol' dose of reality by Blonde Cher when he finds out what the D in Brother D stands for — it stands for Brother Dick."

Jaime and Cersei have sex: "He throws his Anthropologie catalog off the sundial."

Bran, Jojen, Meera and Hodor are attacked by skeletons that rise from the snow: "The extras from the 'Thriller' music video pop out of nowhere to ruin their day."

Brienne of Tarth stumbles upon Arya Stark and The Hound: "So then Tilda happens on baby Kristen Stewart."

Jaime kills his father Tywin in the privy: "He finds Papa Lannister taking a deuce and puts two arrows in his ass"

Arya seeks passage on a ship: "Baby Kristen Stewart talks her way onto that boat and she's like 'Bitch call me Celine Dion because my heart will go on...'"

Be sure to stick around until the very end, when the man himself makes an appearance, when he utters things like: "Oh I didn't know my grandson was homophobic!" Who knew George R. R. Martin had such a wicked sense of humor?