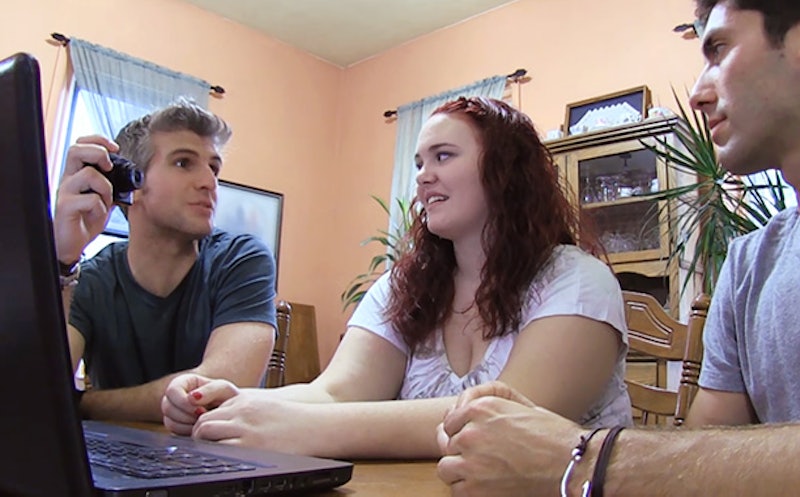 MTV's hit reality series Catfish is a conflicting show to watch. When you hear and see the stories of the hapless, hopeless romantics who have fallen for someone they don't even know online —someone whose stories/lies/excuses throw up more red flags than Turkey, Switzerland, and China combined — you feel a rare combination of pity, sadness, and hope for both of these people. And, let's be honest, there's always been a little bit of schadenfreude in the mix, too.

Now, that's through no fault of Catfish's co-hosts and unrequited love/life partners Nev and Max. These two never make a mockery of their subjects, nor do they try and embarrass or shame them. After all, these people have been through enough humiliation, no matter how much they should have seen it coming from a mile away.

Tuesday night's episode of Catfish was a particularly compelling one. Even if it wasn't the most exciting or dramatic one, per se, it turned a new page for the show. Plus, it showed just how much Nev and Max in particular, care for their subjects. And Tuesday night's subject was one of the most likable, down-to-Earth ones yet.

Jennifer was a shy, formerly bullied 18-year-old girl from Iowa who took refuge in making friends on the Internet when making them in real life was too difficult. That's a shame, too, because Jennifer was a totally cool, sweet, and beautiful young woman. Nev and Max realized that immediately, taking a shine to Jennifer in a way they have never quite done with other people who have reached out to them.

This girl was not some naive teen thinking she found the love with a model. (They are always models, aren't they?) She was just someone looking for a connection and hoped she'd found a real one with a guy in San Francisco named Skylar. She never called him her boyfriend and she wanted to know the truth just as much as she wanted to be happy with him. It was refreshing, honestly.

Now, Jennifer had fallen into the traps that so many of these victims have fallen into before: Her Catfish-er had limited photos, he always had an excuse not to meet or video chat, and he was essentially off the grid online (while they met on an online gaming site, he had no Facebook). Something was, as it always is, fishy.

After some wrong turns and damning evidence (they discovered Skylar wasn't enrolled at the school he said he was), Max finally convinced a "busy" Skylar (they are always busy, aren't they?) to meet an anxious Jennifer face-to-face. Now, Nev and Max are pretty good about staying neutral and hopeful for their subjects, even when it's glaringly obvious they are about to drive them to meet a total fraud. But even they so desperately wanted this guy to be the real deal to not see Jennifer get hurt.

These guys have seem betrayals of trust and fake identities time and time again, but this guy claiming that he not only had zero feelings for his victims, but did his Catfishing for sport pushed all the wrong buttons for Nev and Max. While these two barely kept their cool (Nev stormed off at one point, while Max ruthlessly grilled him), Jennifer managed to stand tall and tell this guy, to his face, about what he did to her.

The next day, as they always do, they gave the Catfisher the chance to tell their side of the story. Bryan admitted what he did was wrong (though, whether he actually felt bad or remorse was a different story) and that he was Catfishing as a reaction to someone doing the same thing to him. So, the air was cleared and the truth was revealed. Still, Max meant business and told Bryan to never contact Jennifer again, a Catfish first.

Earlier in the episode. Bryan outlandishly suggested his fake relationships with Jennifer and others was "a gift" to them. (Yes, he actually said that.) The thing is, there was a gift here, just certainly not that one. In the end, the experience, friendship, and support from Nev and Max, plus her own astounding courage to stand up to someone who wronged her, Jennifer really did get something out of this: a sense of self. And, I'm certain that after the millions of people who tuned in last night and cheered her on, some brand new, real-life, legitimate friends.