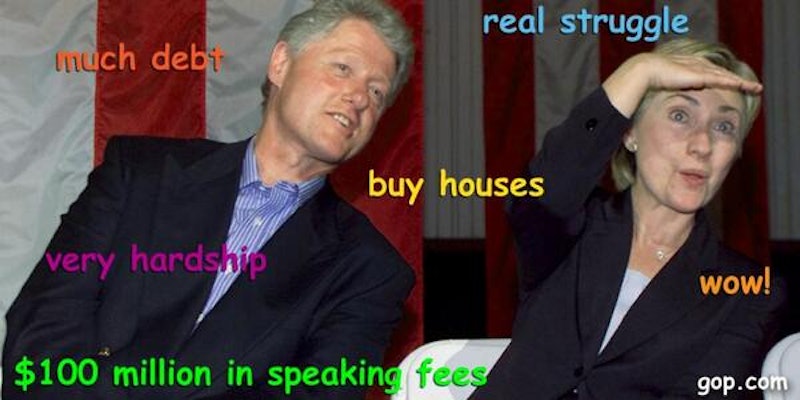 What were they thinking? A Republican attempt at a Clinton doge meme flopped on June 9 after Hillary Clinton made an (admittedly dumb) comment about how she and hubby Bill were "dead broke" after leaving the White House because they faced a lot of legal fees. Not exactly a smooth move, because even though the Clintons were millions of dollars in debt at the time, they were quickly making millions, too — and now they're valued at $55 million. In other words: Don't pity a former president. Think of the consulting and speaking fees being tossed their way!

During a Q&A at the Chicago Ideas Festival, though, Chicago mayor Rahm Emanuel gave Hillary Clinton an opportunity to backtrack on the less-than-savvy comments, according to CBS.

That may have not been the most artful way of saying that Bill and I have gone through a lot of different phases in our lives. That was then, this is now. Obviously, we are very fortunate. We've been given great opportunities. We have gone through ups and downs like a lot of people. But, clearly, we're very grateful for the opportunities we've had.

Awkward, but thankfully for Democrats, not as awkward as what came next, when the Republican National Committee made a bungled attempt at lampooning the slip-up with one of the weirdest Tweets they've sent yet, as MSNBC's reported.

Um, yes, that's an attempt at a doge meme, which Dems were quick to point out is so six months ago.

Seriously, the trend peaked in December.

Even if it hadn't, here are a few things that suggest the RNC doesn't really get the doge meme, if you know what I'm saying. Like when your mom signs off a text message with "LOL" and you are 97 percent sure she thinks it means "lots of love." (Note: This actually happened to me.)

1. Doge is supposed to include a dog

2. The captions are supposed to be from an interior monologue

Not to get overly technical here, but the captions are supposed to be things the dog or subject is thinking, not things the RNC is thinking about the Clintons, like "$100 million in speaking fees." That's why the dog thinking "wow" is funny, because dogs are full of wonder. Especially shiba inus.

3. You're not supposed to credit yourself in a caption

What's up with the whole "RNC.gov" caption the organization decided to sneak into its meme in the lower right-hand corner? The RNC realizes people can't click on that, right?