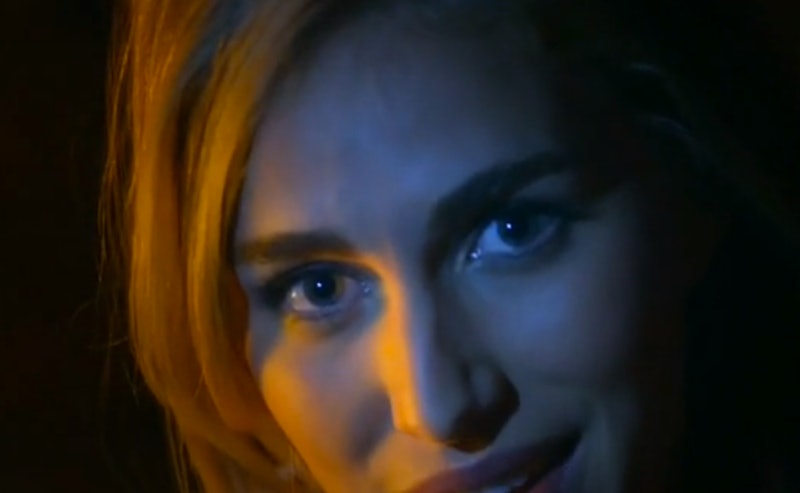 The final episode of the fourth season of MTV's Awkward got hella real. By which I mean it got completely out-of-reality batshit insane. "Just your basic compulsive liar psycho bitch," as one character noted during the hour about a certain character. "That's some serious crazy, Sadita," said another. Both these quotes are extremely right. So let's just jump right into Tuesday's episode face first, okay?

Here goes: Eva is not a cool rich girl named Eva, as she's led everyone to believe all season, but is in fact a girl named Amber who got kicked out of school when she was nine for stabbing another kid in the face. From there, she spent the ensuing years homeschooling herself in a house that looks like it could be owned by the Bouvier Beales. Nowadays she's got a stalker wall that includes a picture of Matty McKibben with hearts all around it and a big crazy serial killer "X" over Sadie's face. Zoinks, kiddos! We've got a psychotic grifter on our hands.

The pregnancy part, at the very least, makes a little bit of sense in this world. The entire show, after all, is based around a girl who was borne out of teenage pregnancy, a fact that is mentioned very frequently. It was never gonna be Jenna who got knocked up — her story's about finding her own future separate from her parents. But when Eva/Amber said "I'm pregnant" midway through this episode, my thoughts legitimately fought between, "What is this shit, Revenge?" and "Eh, makes sense." Especially when Eva/Amber started spilling the sadder parts of her backstory (the parts that make her look better) to the guy who supposedly just knocked her up.

Then Sadie said the perfect thing: "The sociopathic slag is good — you gotta hand her that.

Now, I watch Revenge, so (spoiler alert for Revenge, I guess?) I've been down this road before. The thing is, though, the crazy, "Oh, hey, look I'm pregnant, what a perfect way to distract you from MY OVERWHELMING CRAZY" works with a character who gets first billing on the show and who you've spent three seasons rooting for. It doesn't work for the new girl who's spent the past few episodes meticulously undermining half the good relationships on the show and reminding you why you hated Oliver Trask so much in the first season of The O.C..

For those unfamiliar with the legend of Oliver Trask, let me tell you a story: It took place in a magical land known as teen television in 2003, when the first season of The O.C. was airing. Ryan and Marissa, one of the show's two main young love stories, had recently gotten together and things were going pretty well. Of course, Marissa was in therapy because she'd OD'd on pain pills in Tijuana (long story), and it was there that she met a boy named Oliver.

Oliver seemed nice, and he invited Marissa and her friends to do cool things like stay at his parents' swanky pad in Palm Springs and hang out in the penthouse hotel room he lived in while his folks were off doing international business. (Side note: What was up with rich teenagers living in hotels in the 2000s? Chuck Bass and Logan Echolls, anyone?)

Of course, Ryan sensed something was up, and not just because Oliver very clearly wanted a slice of his girlfriend. Oliver was crazypants, you see: A borderline suicidal stalker who just wanted Marissa for his own. It also taught a lot of teens a valuable lesson on how damn uncomfortable dramatic irony can be: Ryan kept warning all his friends of the crazypants lurking behind Oliver's eyes, but Oliver was so sweet and charming that no one believed him. It drove everyone away from Ryan — even his main bro Seth! — and left everyone at home screaming "WHAT THE FUCK, CAN'T YOU SEE WHAT'S RIGHT IN FRONT OF YOU?"

Eventually Oliver held Marissa hostage at gunpoint and everyone believed Ryan and felt really bad for doubting him.

This storyline still freaks me out.

Awkward's Eva, however, doesn't have a gun; instead she has her womb. A more longterm con, if you will.

So is EvAmber really pregnant? The test would indicate that she is, and it's entirely possible: She's definitely a scheming psycho crazypants, so I wouldn't put it past her to have pulled something like poking holes in the condoms to get herself knocked up. But if this is really what's happening here... what show am I even watching?! I sat down for this episode, expecting a low-key examination of relationships and growing up, and instead I got what would happen if Emily Thorne and Oliver Trask had a baby.

I guess this show pulled a fast one on me: Considering how reasonable Jenna's been most of this season, it really came as a surprise when the show pulled a full-tilt run into Crazyville. I wouldn't use that term to describe most real people with real issues, but this is TV. I doubt that word wasn't written near her name in the writer's room this season. She was written for the title.

How did we get here?