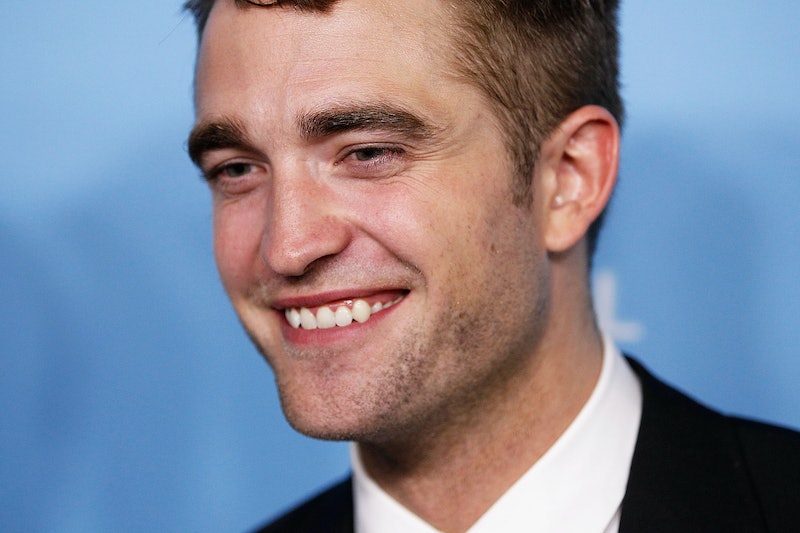 In case you haven't realized it yet, Robert Pattinson is a national treasure. He's been in two beloved franchises — Harry Potter as Cedric Diggory and Twilight as Edward Cullen — and he's pretty much the most relatable, bizarre, adorkable person who ever lived, at least if his interviews are anything to go by. Robert Pattinson might not be the next Indiana Jones, but apparently he once aspired to be the next Eminem. In an appearance on Late Night with Seth Meyers, Pattinson reveals his backup plan was rapping if the whole acting thing doesn't work out. And, come on, are you really surprised?

"I still kinda do [want to become a rapper]... My rapper name was Big Tub. That was my rap name. I was very paranoid about my weight," said Pattinson during the interview. In fact, he's even apparently recorded at least one rap song already. "Yeah, I remember I didn't know how to scratch so I used to pull up and down the zipper of my hoodie. It sounds exactly like it."

Anyone who was surprised to hear that Robert Pattinson wanted to break into the rap game probably lost a lot of their surprise hearing that story, which is essentially classic Pattinson. If you think about it, Pattinson has left us a lot of clues that his backup career was always going to be rapping. In fact, I don't know why we didn't figure it out sooner.

That Time He Gave Himself His Own Nickname

When asked what he thought of his fan nickname of RPatz, Pattinson admitted that he wished the fans would call him something cooler. His idea of something cooler? Spunk Ransom. If that's not the name of his first rap album, I am going to be completely disappointed.

That Time He Didn't Get Punk'd

There's a story that made its rounds on Tumblr that Robert Pattinson was supposed to get punk'd at a bar, but, when the time came for the prank, Pattinson's friends couldn't get him to leave the house. Either he's got a finely tuned sense of danger or he's an almost rap star and he can do what he wants.

That Time He Refused to Socialize

While reflecting on how much he's changed over the years, Pattinson admitted, "I was a real prat for the first month. I didn't talk to anyone. I just drank coffee and told everyone I was 24 and this famous theatre actor just back from South Africa." That's the acting version of building street cred.

That Time He Dodged Questions About His Personal Life

An interviewer once asked Robert Pattinson if there was anything he wanted his fans to know about his personal life. Pattinson responded by telling everyone that Cinnamon Toast Crunch only has 30 calories a bowl. You know why? Because Big Tubs doesn't need to answer your questions, but he can sure teach you something valuable.

All in all, we'd better start begging for Pattinson to release his first rap album from Big Tubs and the Tabbycats, if only because Robert Pattinson would make the best rapper ever. He doesn't even have to be good at it. He just has to keep being Robert Pattinson.

More like this
Olivia Rodrigo’s Song Dedication To 5 SCOTUS Justices Sent A Strong Message
By Grace Wehniainen
Everything To Know About J-Hope From BTS’ Solo Album ‘Jack In The Box’
By Stephanie Topacio Long
Will Beyoncé Be At The BET Awards To Perform “Break My Soul” Or Attend The Show?
By Jake Viswanath
Lily Allen Was “Quite Emosh” After Performing Sober At Glastonbury Festival
By Stephanie Topacio Long
Get Even More From Bustle — Sign Up For The Newsletter