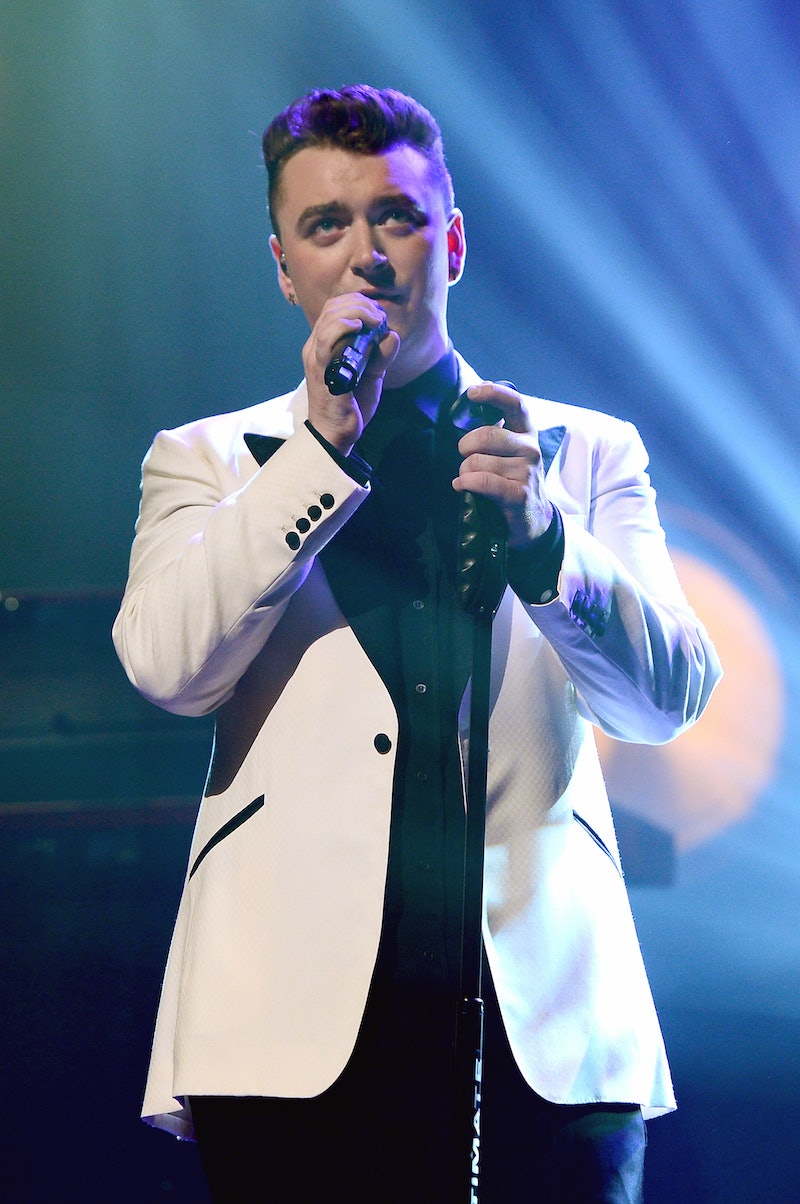 Tuesday, this soulful voice was released to the American masses when Sam Smith's debut album, The Lonely Hour , was finally released in the U.S., four months after its successful U.K. release. The 22-year-old British song-slayer has a pretty unassuming name, but it's attached to a pretty damn near perfect voice. But the guy hasn't just been sitting idly by in those months, trusting that his album would immediately soar to number one on the iTunes charts and take over the world just because people keep saying he's the male Adele. And they do keep saying that. But who can blame them?

Smith shot onto the music scene with a tremendous voice, storytelling soulfulness, and songs that make you think he's spent a full life loving, losing, and reading your diary. The comparisons beg to be made, and Smith doesn't shy away from them, proudly proclaiming the likes of Chaka Khan and Amy Winehouse as his power vocalist role models, and Beyonce as his ultimate idol. Getting your name out there as an international artist isn't easy, but the train usually starts rolling a little more quickly when you have one of the most unique voices on the charts today. He's simultaneously heartrending and hopeful and Smith must be looking to idol Queen Bey for work ethic inspiration, because he's not simply been resting on the laurels of his Next-Big-Thing-pending status.

Taking a risk on potentially one-shot British artist is right up, say, SNL 's alley, but landing a musical guest spot performing on Good Morning America are generally reserved for the sure things, the musicians who have staked their claim on at least a little patch of recording artist history. And Smith has been out there doing his best to write his name in permanent ink...

He's Been Building Up His Street Cred

Even though he's has technically been on the music world's radar since he signed a management deal as 12-year jazz-singing wunderkind, Smith cruised to the forefront of the more common music nerd's radar when he joined up with hugely successful fellow Brits, Grammy-nominated electronic duo Disclosure on last year's hit, "Latch." He followed that collaboration up with featured vocals on the even catchier "La La La" by Naughty Boy, which earned him his first number one single, and first appearance David Letterman, featured alongside Naughty Boy, but mostly stealing the show.

He's Not Good at a One Night Stand

After being featured on two supremely catchy EDM tracks, Smith struck out on his own, staying true to his more soulful style. Smith told Billboard that it took him a while to figure out the artist that he wanted to be, originally thinking maybe he should make a "Rihanna record." Nothing wrong with that, but the conviction in Smith's vocals on tracks like bonafide hit, "Stay With Me," suggests he found his own voice.

Smith also caused a bit of a stir, making fans wonder what exactly inspired his "Leave Your Lover" music video upon it's release in May, but Smith cleared things up, regarding the inspiration for his whole album just a few days later: "In the Lonely Hour is about a guy that I fell in love with last year, and he didn't love me back. I think I'm over it now, but I was in a very dark place."

He Covers All His Bases

But don't be fooled: Sam Smith has made more than just your average reserved-for-post-breakup album. His first official synth-heavy single, "Money on My Mind," is already killing it in the U.K. and is steadily making its way toward becoming an official Summer Jam.

He might not be the showiest performer, but you can always expect a show from Smith: his set at Bonnaroo this weekend was one not to be missed, teaming up again with Disclosure, slaying his own songs, and rocking covers like Arctic Monkeys' "Do I Wanna Know."

There's really nothing that voice can't do...

Watch Sam Smith tonight on Late Show with David Letterman, and count on either a good party or a good cry.