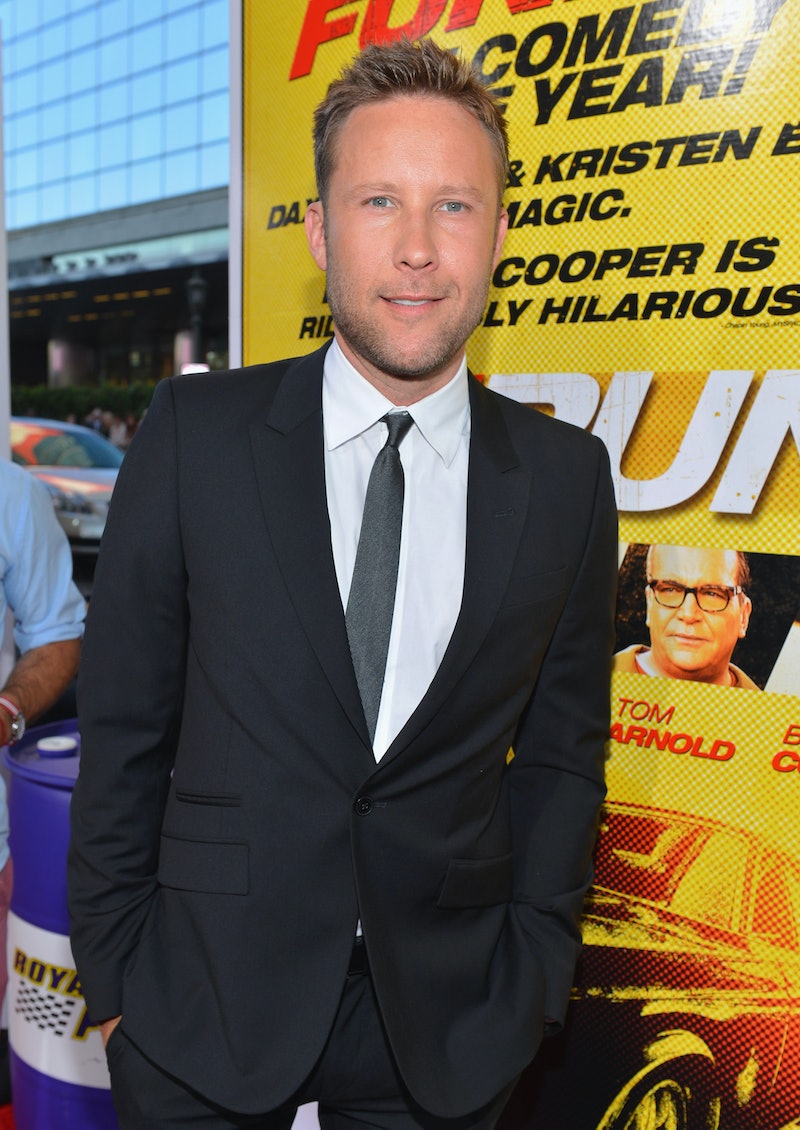 Every once in a while, a show comes along whose very existence warrants an incredulous spit take or two — a premise that seems more at home alongside 30 Rock's "The Rural Juror" than any actual programming. Today, that eyebrow-raiser is Impastor , an upcoming series from TV Land that, you guessed it, centers on a con man passing as a pastor in a small town. Double trouble: The pastor in question is supposed to be gay — so, y'know, jokes, right? Indeed, much like the faux film series Nundercover, born of a bit on comedy podcast How Did This Get Made? — or the all-too-real Santa-as-Viking action drama, Winter's Knight — Impastor is the kind of show that you just know was pitched entirely based on the punny strength of its title. Still, absurdity or no, it appears to have gotten the green light (along with Smallville 's Michael Rosenbaum set to star) — and, believe it or not, it's not even the craziest-sounding program coming soon to the airwaves near you.

This summer alone — amidst the renewal of TLC's Buying Naked (in which nudists shop for real estate) and Disney's Dog With a Blog (exactly what it sounds like) — nine simply inexplicable shows are making their network debut, providing further evidence that television producers have resorted to dumpster-diving behind SNL for their story ideas. Look upon these premises and despair — and/or, dust off your spec script about an amnesiac podiatrist who solves crimes with help from the ghost of Václav Havel. Seems like it has as good a chance as any among this lot.

(Note: For the purposes of verbal expediency, let's put a blanket "I am not kidding" over all of the following.)

For when buying houses in the buff just doesn't cut it anymore. In case the title weren't denotative enough, Dating Naked 's press release explains, "The series will play with the idea of what it really means to be naked in the search for love. There’s no clothing, no jewelry, no phones and no conventions of society. Just you."

Correct me if I'm wrong, but there doesn't seem to be much "play" involved there — people are just nude, right? And dating? While nude? Though the idea may sound plenty titillating (I'm sorry, I couldn't help myself), my guess is it'll ultimately devolve to, well, awkward puns like "titillating." Also, dick jokes. Also, hopefully, the mass incarceration of everyone voluntarily involved with this show. Props to the producers, though, if they go for the Austin Powers-style "strategically placed objects" gambit in place of tasteful blurring to cover up the contestants' unfilmable bits.

Following in the trend of "exactly what it sounds like" programming, Married at First Sight follows six contestants who are willing to put their romantic fate in the hands of a psychologist, a sociologist, a "sexologist," and a "spiritualist," by getting legally married to a match these experts suggest, immediately upon meeting him/her. It's the lifestyle equivalent of a three-legged race at your local town fair: bound publicly and inextricably to a stranger, all but set up to stumble.

Apparently, this show is not the brainchild of inspiration-starved U.S. producers, but rather a remake of a hit Danish premise. Still, much like that once-Danish series The Killing that you probably aren't watching, Married at First Sight reminds us once again that just because another country thought something was a good idea doesn't mean it should ever be replicated for American audiences, ever. We already cringed at those virgins making out like a pair of beached trout on TLC; must we really suffer through more ill-conceived marital foibles?

When you're all out of ideas for food shows, apparently it's time to just smash them inelegantly together — like, say, a "triple decker pastrami donut sandwich," which is exactly the kind of nausea bait you'll find on Frankenfood . Catching on to a culinary tradition broke college students have been exploring for decades, the show promises to feature a more gourmet version of the "What the fuck is left in my fridge anyway" sandwich / stir fry (you know, depending on whether that green stuff has spread to all the bread slices).

Chefs will compete to create "the newest food craze" by cobbling together old standbys, à la "fried PB&J fish sticks and Gyro egg rolls" — because this is what we're left with in a post-cronut economy. Personally, I never thought I would long for the days of watching Fear Factor contestants ingest insects and mammal genitals. Surely, those natural delicacies are far less fearsome than a "cheesecake burger."

For those too lazy to pirate Sweet Home Alabama comes the tale of a typical Jersey Girl™ (i.e., human-shaped self-tanner held together by patterned elasticwear) who married your run o' the mill Southern Gentleman™ (i.e., a cowboy hat that may or may not be attached to an animate body). Upon moving to his home state of Alabama, she's forced to cope with the lackadaisical, cornpone, y'all-drenched hootenanny that is Southern Livin'™ — and, surprise surprise, Hijinks™ ensue. I hereby posit that audiences will experience equal entertainment from this show as they would watching an inbred chihuahua yap at a bottle of Jim Beam, and/or receiving an expedient lobotomy.

This premise, much like that of Impastor, was clearly born by working backwards from the pun:

"Okay, Fat N' Furious ... A reality show about fat positive activists taking down the corrupt corporate food system? No, not sexy enough. An overeating rehab that doubles as an anger management center? Still no? Okay... How about obese people who love to race cars?"

But wait, there's more. The show follows the trials and tribulations of Tommy Christmas (remember that whole "I am not kidding" thing?) and his rowdy Christmas Automotive cohorts as they scour the "Rust Belt State of Ohio" for defunct cars to resurrect as speed demons. In short, it's like the Duck Dynasty dudes and Larry, the Cable Guy all gleeted into the same bucket and lit it on fire. Tommy Christmas may or may not be one of the Four Horsemen of the Apocalypse.

No, it's not a Skinemax bodice-ripper or even an OWN daytime morality play. Rather My Wild Affair is a show about extraordinary relationships between humans and their animal companions — what its site describes as "a love that has no boundaries" — that nonetheless, shockingly, does not appear to feature bestiality of any kind. For that, you'll have to turn to the documentary Zoo . (Actually, you know what, don't turn to Zoo — that is, unless you want the phrase "sodomized to death by a horse" to become vividly, vividly real. Can't say I didn't warn you.)

In case The Kids Are Alright and Delivery Man failed to quench your thirst for sperm-predicated storylines, this show steps right up to deliver a near-identical premise: A Deadbeat Dude who happened to donate his genetic material attempts to reconnect with his estranged progeny. There's even a lesbian couple to boot! Of course, it makes no difference that sperm bank operators have since debunked the idea that any bozo off the street can walk in and become a donor; Hollywood loves nothing more than watching carefree schlubs learn how to Dad, logic be damned. So, bring on the heartwarming food fight montages and huggy life lessons. Oh, but make sure to call it "Seed," just to remind us of the premise as viscerally as possible — I'm assuming "Baby Gravy" was already taken.

Because as every magician will tell you, the best part of any magic show is watching painstakingly exactly how illusionists craft their tricks. Right, guys? Well, in any case, that's what you'll get with Wizard Wars , which — instead of a fuckin' rad Dragon Ball Z-style showdown between wizards from different fantasy canons (e.g., Saruman vs. Voldemort) — promises a reality competition show about group of magicians, who will be challenged each week to invent "the most jaw-dropping illusions" with "an array of random objects." So, basically, it's like Iron Chef, but with significantly more doves and eyeliner. Way to cash in on that pop culture cachet, team.

A sitcom about a couple who are, you guessed it, married. Seriously — as far as I can tell, this show has no other remarkable defining features aside from some commendable raunch (and Judy Greer, who is great). But really now: there's "suburbia," there's "kids," a "declining sex life," even a "carpool." I'm going to go out on a limb and predict some dishes as a mid-season twist. In short, this sounds like a show that Abed on Community (RIP) would make up to cope better with the banal realities of human relationships. Tune in next season, when FX brings you Employed, following a group of quirky renegades as they exchange services for compensation, and Breathing, a wacky romp about people who rhythmically fill their lungs with oxygen.