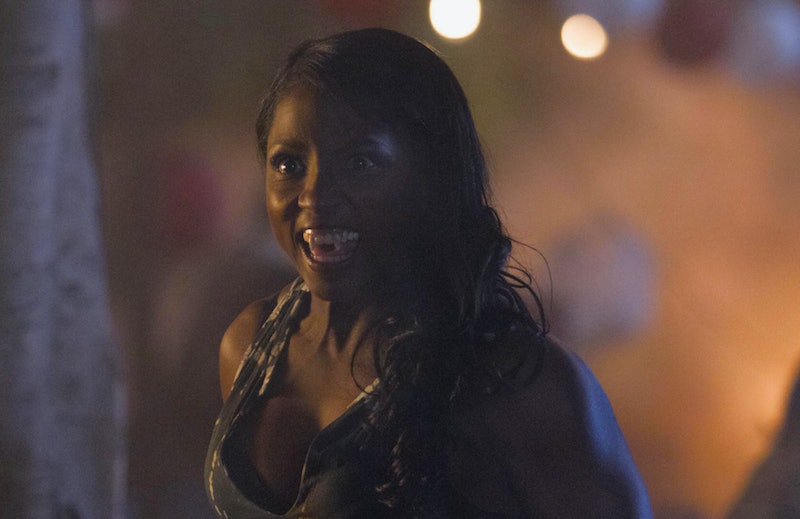 Without so much as a decent close-up, True Blood's Tara is dead. And apparently, this time it's for real. In the opening scene of True Blood's Season 7 premiere, there's much confusion, blood & cuts, and carnage galore just before the familiar vampire gets it. The event itself is tough to make out, as the series' signature dark filter obscures much of the action, but eventually Sookie decrees that Tara is dead. No take backs. Cue jangling guitar intro.

Thassit. Suddenly, we're in a world without Tara — a place where Sookie's non-problems from Season 1 ("Everyone hates me because Bill and I hooked up!") are all that matters once again. Well, that and the legion of blood-sucking Hep V-infected walking corpses traipsing around Bon Temps. They're an issue too.

It's strange though that this character who's been a part of the series since Day 1 is disposed of, seemingly permanently, in a swipe so fast you can hardly see it. Sure, she's not often considered a fan favorite and sure, the writers continually do her a disservice by writing in storylines that make us feel uncomfortable in an awful way (and not uncomfortable in a campy horror way). And yeah, Tara was the biggest whiner this side of Sookie. But she's been on the show for six years and all she gets is a blurry shot and a "Tara's dead!!!" It's a little strange.

Of course, this is the final season of True Blood and the writers needed to convince us that they were super-duper serious. The stakes are actually quite high and there are no more narrative rugs to be pulled out from under our feet. This is the end. For real. Killing Tara certainly accomplished that tone, but with all the fanfare we've seen over unnecessary characters who popped up haphazardly (ahem, Nora), you'd think Tara could get a droplet more of something resembling respect. Then again, this is the show that made Jason an unwilling sperm donor to a tribe of werepanther women, so respect for its characters isn't exactly a defining characteristic.

But Tara is gone, whether we like how the series chose to send her away or not (and whether or not we're okay with True Blood giving all Tara's screen time to her mother). Yet, somehow, the Bon Temps landscape isn't any less crowded. We've got a legion of Hep V vampires with actual faces and names, so it seems that even on its way out, True Blood can quite grasp the concept of simplifying the bloody plot.

More like this
Does Umbrella Academy Season 3 Have A Post-Credits Scene? The Answer Will Surprise Fans
By Brad Witter
Wait, What’s Going On With Ben In That Umbrella Academy Season 3 Post-Credits Scene?
By Gretchen Smail
Here's Why You'll See Less Of Olivia Rodrigo In 'HSMTMTS' Season 3
By Bustle Editors
'Succession' Season 4 Could Be The Show’s Last
By Kadin Burnett and Gabrielle Bondi
Get Even More From Bustle — Sign Up For The Newsletter