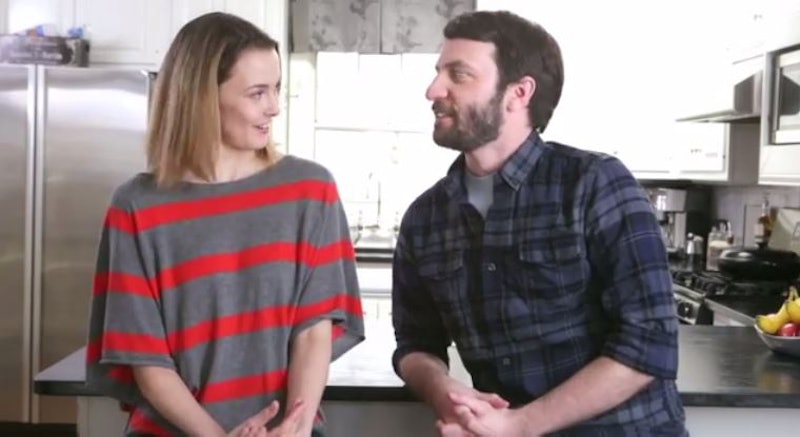 It’s been a pretty big month for The Onion; on top of bringing us the hard-hitting parodies we know and love them for, they launched Clickhole, which mocks clickbait headline sites in spectacular fashion. But that’s not all they’ve been up to; they also started up a new video series, and if the first three videos are anything to go by, it’s definitely going to be one worth watching. It takes the New York Times wedding announcement column, "Vows, " to task by featuring a whole bunch of couples talk candidly not about how they felt on the day they tied the knot… but about how they felt when they started having sex with their current partner. The name of the series, of course, is "Who’s Fucking?", and it is perfect.

The three videos released so far cover a pretty wide variety of relationships: We’ve got Josh and Debra, the standard young, hip, white, hetero couple who have been at it for two months; Isaac and Doris, the older couple who met 55 years ago and have been fucking ever since; and Zac and Evan, a gay interracial couple who didn’t get along at first, but have just reached their eight month fucking anniversary. They’re a little NSFW in their language (duh), but if you can get away with watching stuff like this with headphones in at work, have at thee:

I will freely admit that I’ve never seen the point of newspaper wedding announcements. Unless you live in a tiny town where everybody knows everybody, the majority of the people reading the paper probably don’t know who you are; why, therefore, do you need to share your wedding details with them all? If it’s to get the word out to friends of yours who weren’t able to be at the wedding, there are other, slightly less public ways to go about doing it. Social media has supplanted newspaper announcements as the fastest and easiest way to communicate that sort of information; while it’s still a relatively public forum, the Facebook friends who will be reading your updates are far more likely to actually, y’know, be friends with you in real life.

All that? Is exactly why "Who’s Fucking?" is so dang hilarious. Wedding Crunchers app creator Todd Schneider was right on the money when he described "Vows" as representative of “the hypocrisy of the Times being this liberal institution that still really cares about your resume and what your parents do for a living”; as such, it was only a matter of time before someone finally called it on its ridiculousness. Does it seem far too personal to be exposed to all the juicy details of some random couple’s most intimate moments, "Vows?" Well, that’s how most of us feel about your obsession with random couples’ weddings. So there.

Prachi Gupta at Salon notes that not only was the "Vows" column long overdue for a good dose of teasing, but moreover, so is the New York Times Style section. Could this be next on The Onion’s docket? We can only hope. Keep your fingers crossed, everyone!