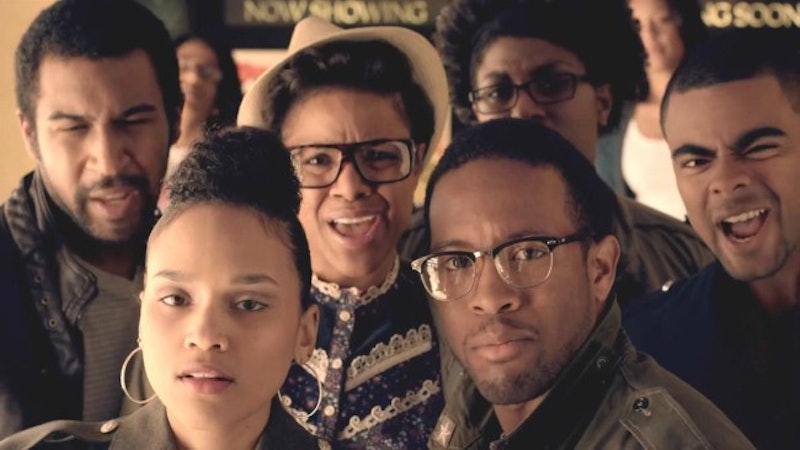 There's good news today: the Dear White People trailer is here, and it delivers on the buzz it got at Sundance. The trailer comes out swinging with satire. It opens with soaring music and a deep-voiced narrator who declares "This fall, in the tradition of The Help, The Blind Side, and The Butler, comes a new film..." only to move to a box office where students of color take to task the flimsy characters in those movies.

That conflict in itself is a good introduction to Dear White People, a satirical film that explores the search for identity of young students of color at a fictional Ivy league college. The title of the film comes from the name of the radio show of one of the characters, who uses it to debunk racial myths and stereotypes. The idea for the movie itself came from the Twitter account @DearWhitePeople, which now serves as a promotional account for the movie, and was funded through a Indie Go Go campaign.

It's hard to know where the film is on a scale between humor and hard-hitting criticism, but regardless, it's an artful way to get people talking about identity and racial micro-aggressions. And a movie, in which a character writes an essay about how Gremlins is actually about suburban white fear of black culture, will certainly put us in some theater seats this fall.