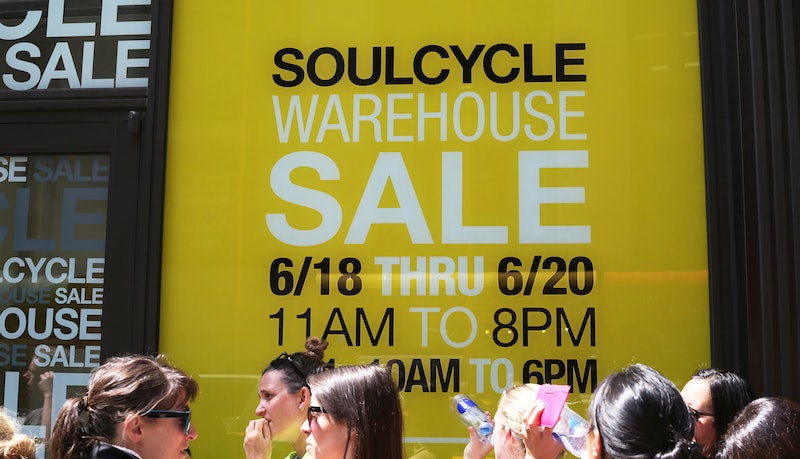 As an avid fan of SoulCycle I was, of course, thrilled when I found out they were having a warehouse sale with all of their merchandise for four days so I could stock up on more Soul-legged pants and be-skeleton'd tank tops. Soul has followed the very smart retail strategy of Lululemon (whom they also partner with) by making their clothes extremely limited edition. I'll see a top I like after class, but don't feel like buying it at that very moment because I am usually half dead. Then, when I come back the next week, apparel cash in hand, it's gone, and I just have to wear my Nike or Adidas workout clothes like some sort of solo stationary bike peasant. The struggle is real.

Naturally, a sale that would include all the SoulCycle clothes of seasons past at a discounted rate was pretty appealing so I could snatch up all the important pieces I missed out on the first time around. Plus, while SoulCycle pants usually go for at least $72 and shirts start out around $42, Racked reported that items were topping out at $40 at the sale.

SoulCycle clothing has taken on a popularity separate from the actual workout (I'd like to do a survey of how many people who went to the sale had actually been to more than two classes), especially due to its collaborations with Shopbop — they just did their second one this month to celebrate the launch of their new Malibu studio. It's more of a status thing than any actual functionality. “We wanted to capture the strong, sexy feeling you get post SoulCycle workout for the Shopbop girl that may or may not have a SoulCycle studio in her city,” SoulCycle co-founder and co-CEO Julie Rice said of the inspiration behind the collection. Who cares if you've never been spinning in your life? At least you can pretend to be a part of this ridiculously trendy workout fad. And that's really why these clothes are so popular. It has become acceptable to wear workout gear all day and pretty much anywhere because now it's so well made and just so darn good looking.

It's kind of like this is what you look like working out before you buy SoulCycle clothes:

And this is after:

So of course when Soul put out an email blast announcing their "first and only" (Really? Only? You're never doing this ever again, Soul? Kay.) warehouse sale, consumers came in a giant, stampeding mass.

In the name of journalism and the fact that I look great in yellow, I decided to brave the warehouse sale on my own. This is what it's really like to be in the madness of a sample sale — I did it, so you don't have to.

It's 10 am, the line is already down the block, and the sale doesn't start until 11.

And it just keeps going.

Seriously, like, do these people not have jobs or what?

The majority of the line is made up of women (there are about four men).

Many of the women are clearly coming from work, but a lot of them are dressed for SoulCycle class. Maybe they thought proving their loyalty to the brand would let them skip the line, but it appears their plan has been foiled.

The excitement of showing up for the sale is starting to fade...

...and the reality of waiting in line in the first hottest day of the summer to buy workout leggings is starting to sink in.

Always a courteous brand, one of the lovely staff members hands out Banana Kale popsicles from Innocent Ice Pops and water bottles.

But then they're told it is going to be at least a two hour wait.

To pass the time, I chatted with Erica Murphy, who had been waiting in line for almost two hours and was contemplating going back to the office. "I didn't think I would be leaving work for this long," she told me. She was starting to get a bit dismayed as people outside were asking people who were coming from the sale whether it was worth it to wait for two hours. Though Erica was wavering she ended up sticking it out in the name of Soul. "I really needed new workout pants and I thought 40% was worth spending the time. And even though I'm new to Soul, I've bought into the hype and I wanted to be part of the experience, even though it was a madhouse."

Finally you get in!

And by beautiful I mean it is a big, gray warehouse with SoulCycle clothes. All of the tops I had seen for years and regretted never buying were there!

And people are actually pretty calm.

No shoving or pushing or otherwise crazy behavior.

There's Not A Tear In Sight

So far, no one has started sobbing because they couldn't find something in their size. Way to be reasonable, Cyclers!

One woman stripped down to her nude thong to try on some pants.

Do what you gotta do I guess.

The staff, as Soul is known for, is remarkably upbeat and kind and keeping everyone very calm.

Thank you, kind sirs and madams, for telling me my butt looks great in these yoga pants.

Strangers are teaming up.

Many groups of women are going in on clothes together to get one free (you get a sixth item free if you buy five.) It's kind of adorable.

I was impressed with my restraint.

I managed to not go too crazy while I was in there and only buy two items, but I was probably in the minority.

And we all remembered what's most important.

That now we will all look great at our next class... or just Sunday brunch at least.

And that is how the first ever SoulCycle warehouse sale went down.

More like this
How To Get Your Hands On Manolo Blahnik’s Latest Birkenstock Collab In The UK
By Vivian Iroanya and Rachel Mantock
Yes, You Can Buy Off-White’s New Beauty Range In The UK
By Tomi Otekunrin
Rihanna’s Makeup Artist Isamaya Ffrench Is Launching Her Own Makeup Line
By Tomi Otekunrin
An Ode To The Balm That Keeps My Hayfever At Bay
By Jessica Morgan
Get Even More From Bustle — Sign Up For The Newsletter