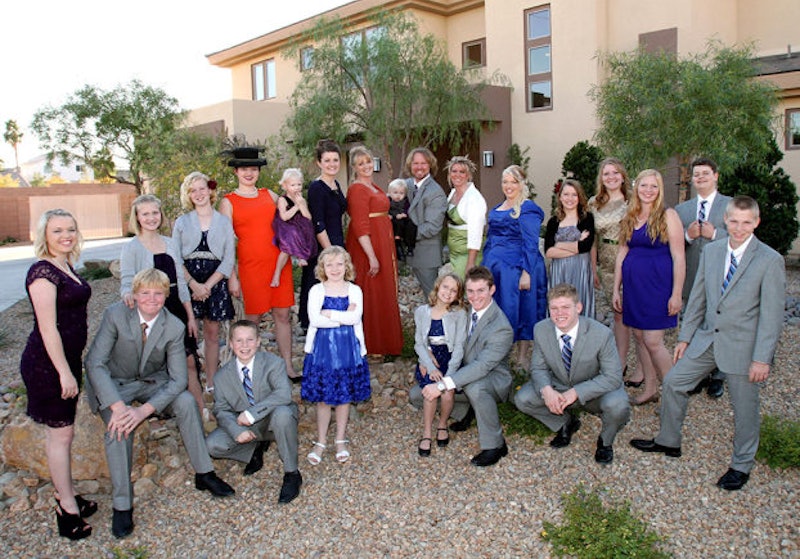 When it comes to reality shows about huge families, TLC definitely has a monopoly. But whose family is the largest? The Duggars, from 19 Kids & Counting, currently hold that torch, but if the Sister Wives decide to have more kids, they may have to hand over the trophy. When we first met Kody Brown's wives, Meri, Janelle, Christine, and Robyn, Christine was pregnant with her youngest daughter, Truely, and Robyn hadn't even married Kody yet. Since then, their family has grown — and if you've lost count, I definitely don't blame you.

Between the four wives, the Browns have 17 children and they raise them as one big family. While the kids all live in the homes of their actual mother, they're encouraged to see all of Kody's wives as their mothers. Hey, remember that time all four moms showed up to every kid's parent conference at school? If the kids didn't want to talk about being on reality TV while they're just trying to avoid falling asleep in math class, that ship has officially sailed.

But with so many kids (and so many moms), things tend to get pretty confusing. Thanks to the handy dandy family tree on the Brown family website, however, it's easy to see how many kids are — and which kids match up to which moms.

Meri is the easiest to keep track of, since she only has one kid — an 18-year-old daughter named Mariah, who's currently attending Westminster College in Salt Lake City, Utah. So far, so good.

Here's where things start to get confusing. Janelle has six kids: Logan (19), Madison (18), Hunter (17), Garrison (16), Gabriel (13), and Savanah (8). Logan is the oldest of all the Brown kids, and was the first to go to college, attending the nearby University of Nevada, Las Vegas. As for Madison, she's the daughter who previously stated that she's not following in her parents' footsteps, as she's decided that sharing a husband wouldn't make her happy.

Christine has six kids to match Janelle's brood, so now, we're up to a grand total of 13. Christine stands out, however, because her kids are the most uniquely named. There's Aspyn (19), Mykelti (18), Paedon (16), Gwendlyn (13), Ysabel (11), and Truely (4). Mykelti just graduated high school last week, while Aspyn currently attends UNLV, like her brother Logan, and is part of the Alpha Xi Delta sorority. Want to really feel old? Truely, who hadn't even been born when the show first started, just graduated from preschool.

And finally, we fill out the group with Robyn's four children: Dayton (15), who we recently found out has Asperger's Syndrome, Aurora (14), Breanna (11), and Solomon, who's almost three years old. Dayton, Aurora, and Breanna all come from Robyn's previous marriage, and Solomon is the only child Robyn's had with Kody — so far, that is.

All caught up? Good. If there are ever more Brown children added to this list, at least they've got a lot of older siblings to look up to.