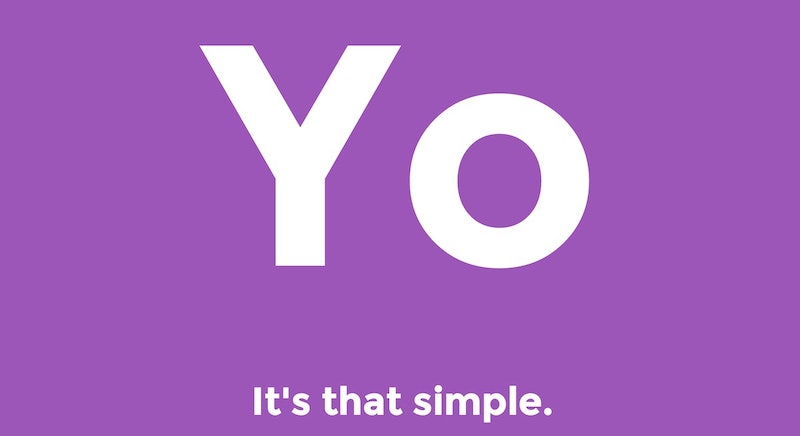 By now, you’ve probably heard about the bizarre app known as Yo. All the iPhone app does is broadcast the word “yo” to your friends, thus allowing them to “yo” you back — and somehow, it has become one of the fastest-growing downloads in the App Store. It even overtook Fabook’s Slingshot messaging app in the App Store download rankings, something about which I’m sure Mark Zuckerberg is not pleased.

Or Arbel, co-founder and CEO of Yo, told Mashable on Thursday, “If you think this is just an app that says ‘yo,’ you are getting it wrong. It’s a new way to get lightweight, non-intrusive notifications. We are here to cut through the noise. We like to call it context-based messaging.” I’ve spent a few minutes puzzling over this statement; I remain, however, uncertain as to whether Arbel is absolutely serious, or the best troll in the world.

I could try to delve into why this thing is so dang popular — or how on earth it managed to raise $1K for its creation — but I feel like that might be an exercise in futility. Besides, Stephen Colbert has already done it in what will probably become known as the definitive Yo analysis for generations to come. Watch it all the way through — it’s worth it. Trust me:

Perhaps the most hilarious thing about Yo, though, isn’t the app itself. It’s the reviews that it’s getting in the App Store. If things continue at the rate they’re going now, Yo stands to become the next Three Wolf Moon — and that’s really saying something, since the Three Wolf Moon t-shirt has gone down in history as one of the most hilariously reviewed Amazon items of all time. Like Three Wolf Moon, the best of the Yo reviews have their tongues so firmly in their cheeks that they’re in danger of poking out through the other side; they are also, however, a comedy gold mine.

Some Yo users have discovered how handy the app can come if you find yourself trapped in a horror movie:

While others are more taken with its simple, yet life-changing abilities:

Some believe it represents a breakthrough in human-dolphin communication:

And yet others believe Yo to be the first step in the evolution of the English language:

Yo apparently turns some users into heroes:

While others think Yo itself is a hero:

And let’s not forget how useful it can be when it comes to the care and keeping of your favorite pets:

Or think too deeply about it:

It has a few problems, of course:

But in spite of these issues, some have become to worship it with a cult-like fervor:

The Yo worshipers have no time for people who think like this:

But you know what? SCIENCE:

Yo? Yo. Just don't Yo Shailene Woodley, 'cuz she doesn't have a phone.