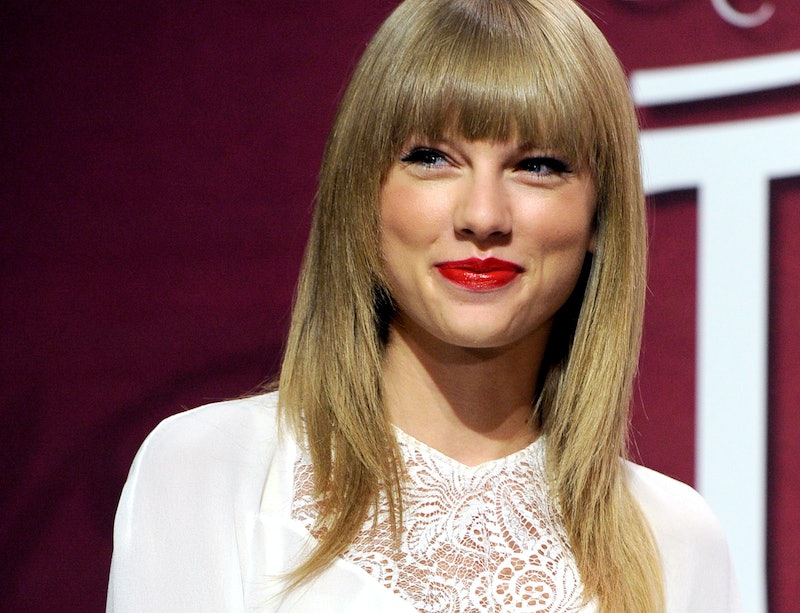 New music from Taylor Swift could be here very soon! During a press conference at the end of May, Swift confirmed that after she completed the Asian leg of her Red Tour, she would be "throwing" herself into finishing up her next album. "I've already been working very hard on it and it's already my favorite thing that I've ever created," Swift said. The Red Tour wrapped up on June 12, so presumably, the 24-year-old singer has begun putting the finishing touches on her new material. If I had to guess, I'd say that we should expect the new Taylor Swift album to arrive in late October or early November, with the lead single premiering in either August or September.

I've been so caught up lately trying to predict when Swift's new music will arrive that I've neglected one very important question: What do I want her new music to sound like? Over the course of four albums, Swift has told many different stories and experimented with a variety of musical styles. On her upcoming album, I have no doubt that Swift will continue to dabble in new genres and explore intriguing new topics. It's going to be great.

So, here's what I want to hear from Swift's next album:

In March, OneRepublic frontman Ryan Tedder confirmed that he had worked on a song for Swift's new album. Tedder has a number of hits to his name, and like Swift, he's kind of a musical chameleon, but he's probably best-known for helping to create Beyoncé’s "Halo." As Swift's musical career has progressed, she's really grown as a vocalist. I think it would be awesome to hear Swift show off her voice on an epic, soaring love song like "Halo." I can't wait to hear what Tedder and Swift have cooked up!

Hell hath no fury like a Taylor Swift scorned. Seriously. Pop-rock stomper "Better Than Revenge" is one of the highlights of Swift's fantastic 2010 album, Speak Now. It's always a treat to hear Swift take down her enemies via song. Can we hear another catchy, venom-filled payback anthem? Please?

A Song About Her Friendship With Ed Sheeran

Swift has written plenty of songs about potential boyfriends, current boyfriends, and ex-boyfriends, but she's never really explored the friendship angle. It would be cool to hear Swift write song about her completely platonic relationship with British singer-songwriter Ed Sheeran — the two appear to be very close. (Sheeran confirmed in an interview on Thursday that they've never dated.)

There was early word that Swift's last album, Red, was going to feature a couple of straight-up pop songs, but no one, and I mean no one, expected the "You Belong With Me" singer to experiment with dubstep (okay, it could probably be more accurately described as "popstep," but still). The risk paid off. "I Knew You Were Trouble" peaked at number two on the Billboard Hot 100 chart, making it Red's second-biggest hit. I wonder what Swift will do to surprise us on her next album...

Last week, we learned that Swift worked on "most of" her new album with producer Max Martin ("We Are Never Ever Getting Back Together," "I Knew You Were Trouble," "22"). Did you know that Martin is also responsible for crafting many of the hits on Katy Perry's record-breaking sophomore album, Teenage Dream? Well, he is — including the album's incredible title track. "Teenage Dream" (the song) is without a doubt one of my favorite pop tracks of all time. What if Martin inspires Swift to create a wistful up-tempo pop song in a similar vein? I would die — but then the song would probably bring me back to life again. It would be amazing.

Ah, "Love Story." What an adorable masterpiece. Wouldn't it be nice to hear another sweet, heartfelt country song like that? Granted, Swift's not a teenager anymore, so she could probably ditch the ninth grade English-esque references to Romeo & Juliet, but I bet she could find a way to do that and still retain the song's magic.

In addition to Tedder and Martin, Swift has also worked with legendary songwriter Diane Warren on her new album. If you've listened to the radio at all over the past 30 years, you've heard Warren's music. She's particularly famous for her emotional power ballads, like Aerosmith's "I Don't Want to Miss a Thing, Toni Braxton's "Un-break My Heart," and LeAnn Rimes' "How Do I Live." My favorite Warren-penned song is probably Celine Dion's Grammy Award-winning "Because You Loved Me." I would love for Swift to record a similar song, but I don't think it's likely. Still, it would be rather unexpected...

Three of my favorite Swift tracks were co-written by songwriter Liz Rose: "You Belong With Me," "Fearless," and "All Too Well." Swift co-wrote seven songs with Rose on her 2006 self-titled debut album, but her involvement in Swift's music has diminished as the years have gone on. Swift's new album could include a lot of pop songs, but in my opinion, it needs country songs, too. I think a writer like Rose could be instrumental in helping Swift stay true to her country roots (at least some of the time).

A Song About Harry Styles!

Swift's had her fair share of celebrity boyfriends over the years, but One Direction's Harry Styles is really the only one worth caring about. I can't say that I'm heartbroken that the two are no longer together (move aside Swift, I'm comin' through!), but I do want to know all of the juicy details of their relationship. For example, boxers or briefs? How does Styles drink his coffee in the morning? Is he truly as breathtaking and perfect as he appears to be in all of the gifs I've seen on tumblr?? I need to know everything!

This is a pretty long wish list. I realize that there's virtually no way that I'll get to hear everything that I want, but that's OK. Swift is one of the most talented artists in the music industry today. In my opinion, she hasn't put out a bad album yet. Whether Swift's next project turns out to be primarily pop, country, pop-rock, folk, blue grass, techno, hip-hop, rap, trap, death metal, or a healthy mixture of all of the aforementioned genres, I think it's safe to say that it's going to be an album to look out for.