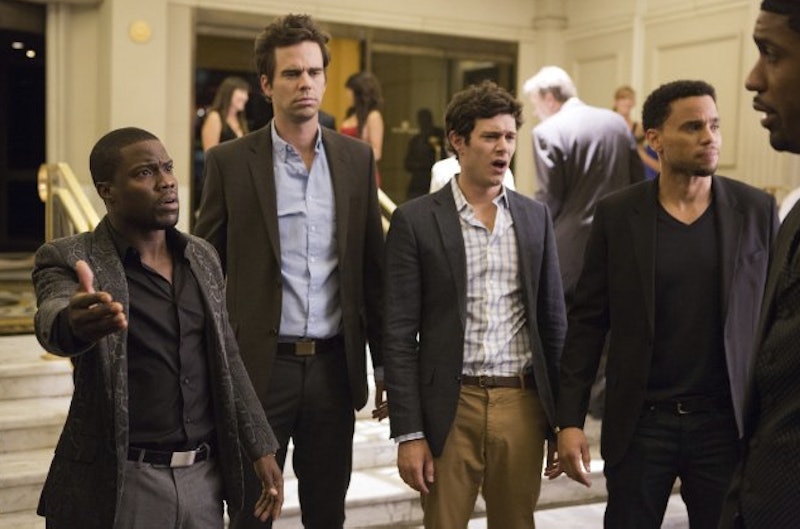 As you may have noticed if you've been on Twitter, Think Like a Man Too has been trending due to its release today, June 20. If you haven't been on Twitter, you've probably seen the commercials for the film that have been airing constantly. These show the movie's lead cast members — of which there are many, this is truly an ensemble comedy — but you might be surprised to hear that the famous names extend beyond film's stars. For example, Adam Brody is in Think Like a Man Too and he's not the only seemingly random actor to land a role in this sequel. The Think Like a Man Too supporting cast reads like someone put the names of all of Hollywood's actors, from A-list to D-list, into a bag, pulled out a selection of them, and got castin'!

As for who stars in the film, there's Kevin Hart, Regina Hall, Michael Ealy, La La Anthony, Taraji P. Henson, Gabrielle Union, Wendy McLendon-Covey, Jerry Ferrera, Romany Malco, Terrence Jenkins — is that everyone? Seriously, there are so many people in this movie and that's shocking when you realize it's a sequel to a film based on a self-help book by Steve Harvey. Basically, this movie has a ton of big (and not-so-big, but still recognizable names) that will definitely make you go, "Whoa! What are they doing here?"

Here are some of the most surprising members of the Think Like a Man Too cast:

Yep, our boy Seth Cohen is in Think Like a Man Too. He plays someone named Isaac and at some point wears a sailor suit. Because my teenage crush on Brody is still hanging on, this might be enough for me to watch this movie.

Wendy Williams was in the original Think Like a Man as well, so if you saw that this is probably not a surprise. But, if you've only seen the trailers, then you're probably like, "Whaattt?! Wendy Williams?! How you doin'?" She plays the ex-wife of Kevin Hart's character because she's super tall and he's super short. Comedy!

If you see the movie and recognize Cheryl Hines it could be for any number of reasons as she has a very long resume, but I know her best from Curb Your Enthusiasm. She also stared in the recently canceled Suburgatory.

Yep, that Coco. Coco Austin is best known for Ice Loves Coco on which she starred with her husband Ice-T. In Think Like a Man Too, she plays someone named Coco, but unlike other actors is not listed as "Self," so... she's just playing someone else named Coco? You'll have to watch the movie to find out!

The man best known as Apollo Creed and Tobias Fünke's acting coach is in this movie too.

Suh is a defensive tackle for the Detroit Lions. He isn't the only athlete to make a cameo on this film — boxer Floyd Mayweather Jr. appears as himself — but what is odd about Suh's role is that he plays "Guy 1." I see a crossover career in the making!

More like this
Kimberly J. Brown & Daniel Kountz Looked Back On Their ‘Halloweentown’ Romance
By Stephanie Topacio Long
All The Sneaky Lindsay Lohan Movie Easter Eggs In Her New Ad, Explained
By Stephanie Topacio Long
Alicia Silverstone Has Recreated An Iconic 'Clueless' Scene
By Frances Stewart
You Might Want To Rewatch 'Elvis' For This Britney Spears Easter Egg
By Grace Wehniainen
Get Even More From Bustle — Sign Up For The Newsletter