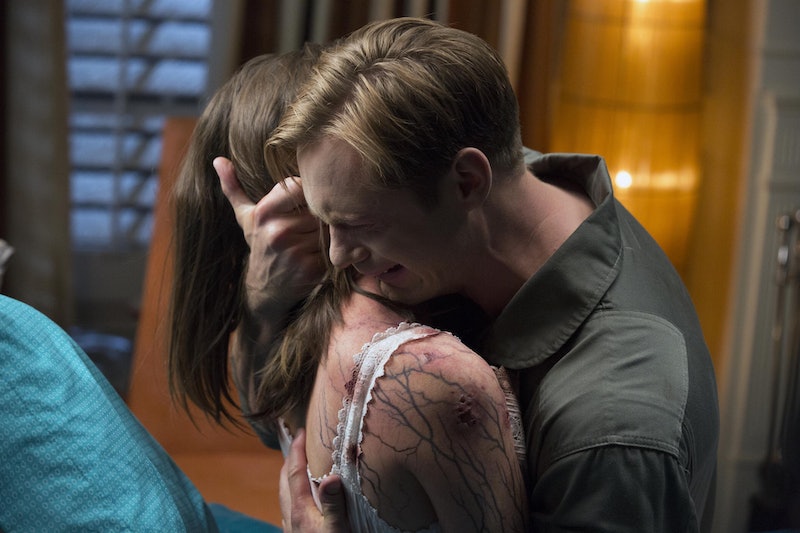 Thanks to the wildly ridiculous anti-vampire events through Season 6, True Blood is now neck-deep in Hep V-infected vampires. Many people have called the afflicted vampires True Blood's own version of zombies, but those of us who labored through the entirety of Season 6 know that's not quite the case. Season 7's villain isn't a legion of brainless, decaying drones, it's a disease that slowly kills vampires from the inside. It's okay if you're confused; if you're watching True Blood, you probably like scratching your head for 53 straight minutes on Sunday nights in the summer.

But the thing is, Hep V doesn't entirely make sense. Prior to Season 7, vampire-kind became infected with the stuff because the evil folks at LAVTF Vamp Camp (where Jess, Tara, Willa, & Co. were imprisoned last season) modified another nonsense virus (Hep D) to be even more deadly. Then, they proceeded to secretly feed the virus to the imprisoned vampires and those free vamps dumb enough to buy the enemy's supply of Tru Blood out in the free world. You still with me? Well, get ready to lose track of this nonsense illness.

Hep V gets more complicated from here, so to keep your head from experiencing its own version of True Death, here's your very own version of Hep V: 101.

What The Hell Is It?

So what is a modified version of Hep D? A super deadly version of the virus we saw affecting vamps in Season 1. In case you can't remember that far back, two Fangbangers carrying the Hep D virus in their blood let a group of godawful vamps feed on them in hopes of infecting the vamps. When a vampire ingests the Hep D virus, they are weakened for a few months and humans have a better shot of killing them. Hep V does the job all on its own. Good thinking, crazy evil Anti-Vampire folks.

Once a vampire ingests the infected blood (or becomes injected with it, in Nora's case), Hep V begins to produce black veins visible all over his or her body. The vamp slowly weakens, experiences pain exponentially, and when their temperature rises to a burning level, they're not far from Hep V's own version of True Death: melting like the Wicked Witch under a bucket of water.

How Long Does It Take?

From what we've seen so far in Season 6, the process takes about 24-48 hours, but knowing this show, that time will be played with in order to suit the story.

So, If It Acts Fast, Why Are Hep V Vamps a Threat?

Because True Blood makes no freaking sense. We've spent the entire time learning about how vampires are people too and that the state of needing human blood to survive doesn't necessarily make vamps evil, yet it's all flying out the window in Season 7. The infected vampires have less than two days left to live with no way out of that fate, yet they are traipsing around like zombies, eating everything in sight as if they need blood to survive. It's just wasteful and it certainly doesn't support the case True Blood has been making for six whole seasons.

How Does It Become An Epidemic?

Magic is to blame, because we can't figure out any other reason. Hep V shouldn't be able to become an epidemic, unless uninfected vampires started feeding on infected ones en masse (unlikely) or uninfected vampires fed on legions of different people who drank an infected vampire's blood en masse (super duper unlikely). And unlike Hep D, there's no way for a vamp to feed on a human who's a carrier because Hep V was created in a lab. The only possible way to create a true epidemic would be if the LATVF dumped a Hep V into humans' water supply systems and considering most of them were pretty dead at the end of Season 6, that seems extremely unlikely.

But you know what? I'm sure True Blood has some nonsense loophole just ready and waiting for us in Season 7. It wouldn't be right if the series started putting on airs and making sense for its final outing, now, would it?