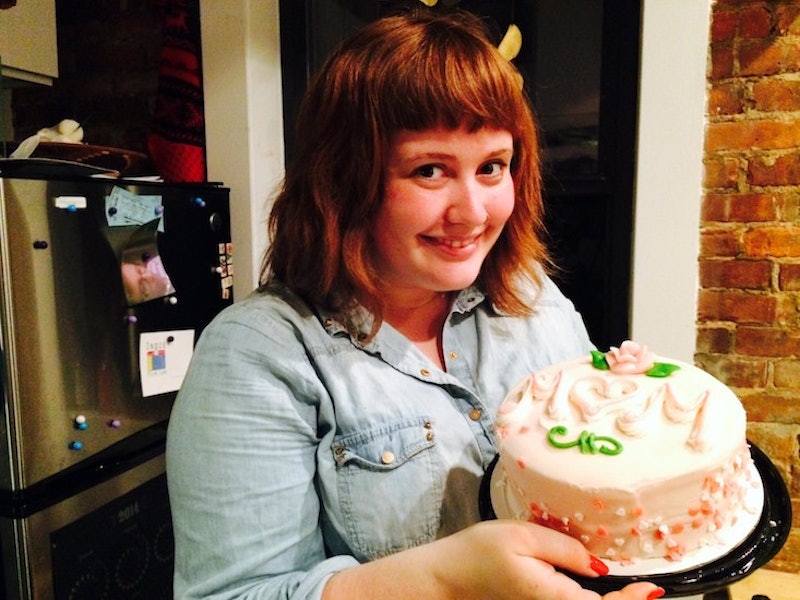 There’s this rumor going around — you’ve probably caught wind of it: Turns out we’ve been cutting cakes the wrong way for our entire lives. According to a video that made the rounds recently, cutting triangular slices of cake and wrapping up your confection for a later munching session just renders it dry and crumby by the next time you pull it out of the fridge. Being the self-titled cake connoisseur and constantly curious person that I am, I had to take on the challenge. Not to mention it was a good excuse to enjoy some late-night cake consumption with my one and only. Because what doesn’t say love like a leftover Mother’s Day cake? Apparently, this is the only choice you’ve got when you hit up the Brooklyn MET that Biggie Small’s used to work at around 10 p.m. Still, I’m pretty excited about this little experiment (obviously). Read on to see whether this sweet revelation was a bomb or a bust.

Following the new cake cutting instructions, you cut a slice right through the center of the cake at its widest point. Make a second cut parallel to your first to create your first “slice.” It was here that I realized it’s best to be that first slice winner, considering future slices will only get smaller and smaller (figures).

If you’re feeding more than just your own face, you’ve got to push the two cakes halves together to prep for the second helping. Once you’ve got that in place, make a perpendicular cut across the cake and repeat the same instructions from the first cut you made. You should be left with two smaller slices.

Once you’re done serving for the day/night, push all of the cake quarters together toward the middle so they create a smaller cake. This is where it gets weird. Grab a rubber band and put it around the cake. In order to keep the exposed cake parts — brace yourself — moist, you’ve got to make sure they aren’t seeing the light of your refrigerator.

For being a leftover Mother’s Day cake, it tasted pretty darn good the night it was purchased. After a few (too many) “test bites,” we put the cake away for the night, skeptical about what the morning would bring. Come 8 a.m., we pulled the scientifically cut cake out of the refrigerator and much to our surprise, it tasted exactly as it had the night before. Although the dry cake bits had never stopped me before, I’m not quite sure I’ll be going back to the old slice and store system. I’ll just have to make sure I’m the first in line for that prized center slice.

Friends, I beg you to drop you tired cake-cutting habits and give this method a spin.