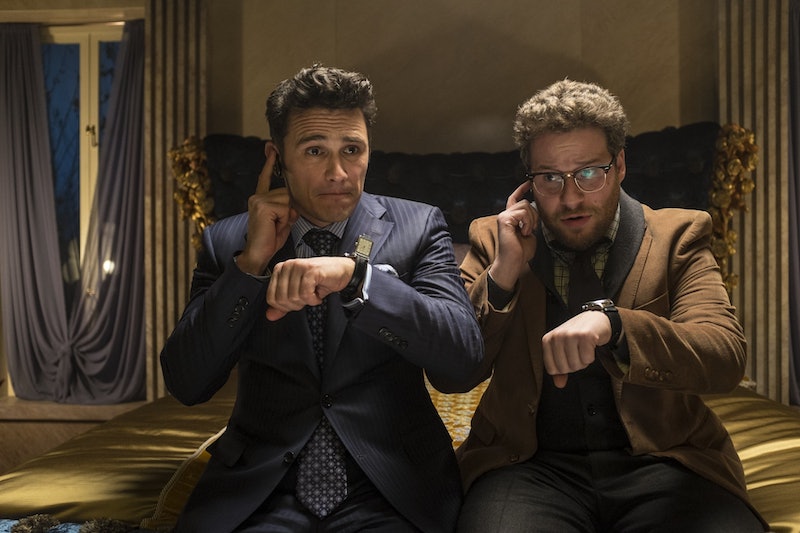 Welp, this is weird. According to a new report in the UK's The Daily Telegraph, North Korean dictator Kim Jong-Un will probably watch The Interview , Seth Rogen and James Franco's upcoming comedy which focuses on their characters playing assassins hired to...well, kill Kim Jong-Un. This is way too meta for my brain to handle on a Saturday morning.

Don't assume it's because Jong-Un is just a big comedy buff or is a James Franco fan or something — according to the executive director of The Centre for North Korea-US Peace and an unofficial spokesperson for the North Korean dictator, the reasoning behind Jong-Un wanting to watch the movie is actually more, well, Kim Jong-Un-like than that: "There is a special irony in this storyline as it shows the desperation of the U.S. government and American society," the spokesperson told The Daily Telegraph.

The statement only got stranger from there. "A film about the assassination of a foreign leader mirrors what the US has done in Afghanistan, Iraq, Syria and Ukraine...and let us not forget who killed [President John F.] Kennedy – Americans," he continued. "In fact, President [Barack] Obama should be careful in case the US military wants to kill him as well." Who'dve thought a Seth Rogen movie would ever end up being a conversation subject in international politics?

It's worth noting at this point, as hilarious as this story seems, Jong-Un as a person is still no laughing matter — he's a dictator who has kept decades of oppression alive and rampant in North Korea since he took over the regime in 2011.

If you didn't catch the teaser trailer for The Interview yet, check it out below: