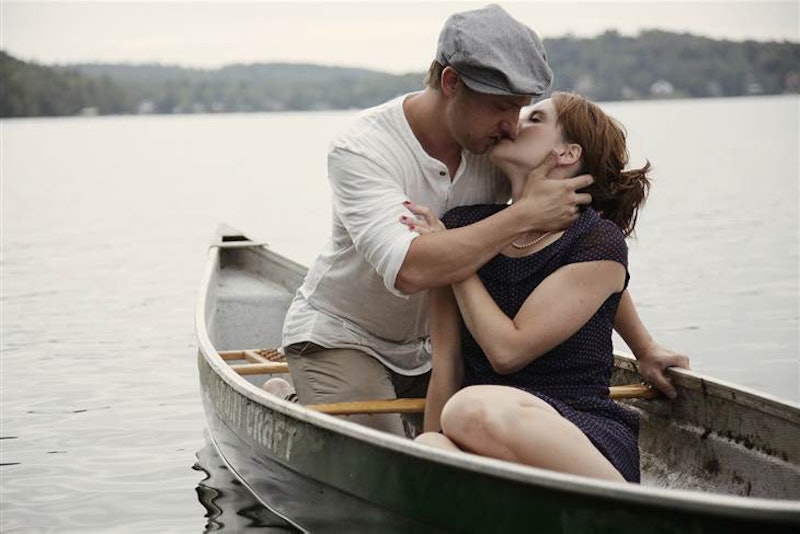 Engagement photos have the potential to get real cheesy real fast — there's a lot of piggy back rides, forced staring into each others eyes amid fall foliage, awkward recreations of the "Sailor Returning Home" kiss, nonsensical uses of picture frames, etc. In light of all these tired pre-wedding pic tropes, couples who are willing to break the mold a bit certainly earn points for creativity. There were bride-to-be Marian Schembari's gender-swapped photos from earlier this year; the Los Angeles couple whose photos mocked some typical romantic comedy cliches; and now, in a much more earnest but still welcome switch up, the Notebook-themed engagement photos of Montreal couple Cindy Gauthier and Jean-Nicola Barile.

The couple got married in 2010 but the photos are going viral this week upon the 10-year anniversary of the Rachel McAdams and Ryan Gosling movie. Photographer Chelsea Gray of Blushing Bride Studio (which shoots destination weddings worldwide) suggested an adventurous shoot and Gauthier proposed recreating the wrenchingly romantic film at Barile's cottage in Quebec. All the key scenes are recreated — the rowboat ride, the rain-drenched kiss, the very sexy removal of McAdam's stockings — and the result is ultra-romantic, thanks in no small part to an idyllic setting and a female subject who could pass as a movie star herself. I personally like the idea of taking your own engagement pics with a Polaroid, but these photos are quite dreamy nonetheless. Check them out below.