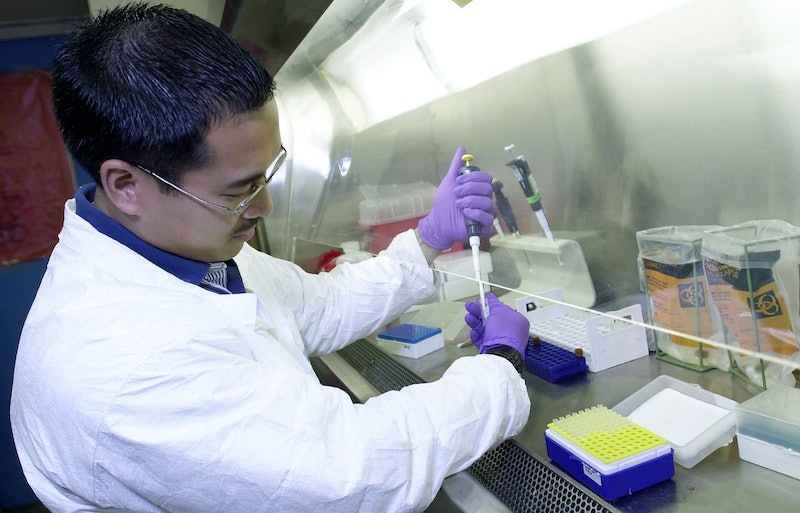 Investigators are looking into why dozens of people may have been exposed to anthrax at the CDC's Atlanta labs on Thursday, and the reasons represent failings on multiple levels. The lapse was first discovered on Friday, when investigators determined that up to 86 workers may have been exposed to the deadly bacteria. 52 of them were put on precautionary antibiotics after the suspected exposure.

In what could be the opening of a classic science fiction B-movie, the agency's extremely high-security Bioterror Rapid Response lab had been working with the airborne bacteria, preparing samples for study in two lower-security labs. The scientists at the first lab thought they had inactivated the particularly dangerous strain before sending samples off, but no such luck. The lower-security labs had planned to research quicker ways to detect dangerous spores in environmental samples, and they got more hands-on experience than anyone expected.

The samples were in the lower-security labs for a week before anyone noticed something was wrong. Workers at the Bioterror Rapid Response lab eventually caught a live anthrax sample growing in a petri dish – a sample similar to the ones they had sent to labs with fewer precautionary measures for their workers. After the discovery, live anthrax was, in fact, found on materials that the lower-security labs had been asked to dispose of. On top of the lower overall security in these labs, workers there had not taken measures to protect themselves from live samples because, well, they were supposed to be inactivated.

So how did such an obvious oversight happen? The U.S. Department of Agriculture (which took over the investigation from the CDC to avoid conflict of interest) believes it has found multiple protocol breaches, from the unexpected to the obvious. The high-security workers were trying a new method of inactivating the anthrax by using chemicals instead of radiation. Since the method is a fairly new development, unexpected things were likely to happen. Which is why workers were supposed to wait 48 hours before sending off any samples that looked dead. In a spectacular oversight, the Bioterror Rapid Response scientists only waited 24 hours. Yep, this one's definitely on them.

Workers at the labs that were unequipped to deal with live samples are being treated with intensive vaccine regimens and antibiotics, and no one has fallen ill yet. Officials doubt that anyone will end up being infected, but the bacteria can lie dormant in the system for up to 60 days. If this is, in fact, a science fiction B-movie, we've only just finished the opening sequence.

More like this
The Guide To “Witches Stairs” & Why They’re Actually Great For Small Spaces
By Emma Garza
Where Is Oscar Torres In 'Only Murders In The Building' Season 2?
By El Hunt
The “Beatrice Six” Were Awarded $28 Million After Their Wrongful Convictions
By Brad Witter
It Took Investigators 23 Years To Correctly Identify Helen Wilson's Real Killer
By Brad Witter
Get Even More From Bustle — Sign Up For The Newsletter