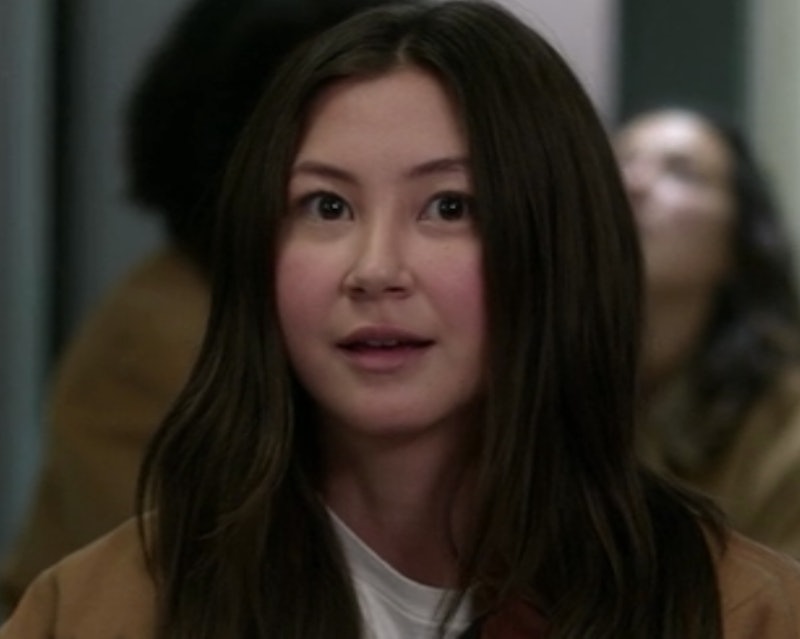 One of the most notable new characters on this season of Orange Is The New Black is the the bubbly activist Brook Soso, played impeccably by Kimiko Glenn. Kimiko Glenn turned to Reddit to answer questions about the show, and many of her answers were as wordy as Brook's might have been. Here's the condensed version.

1. She was halfway through the first season when she found out she had an audition. "When I got the audition, it was an exciting surprise since I was in the middle of watching the show! I was in the middle of the season somewhere, maybe episode 5 or 6, and I was getting really into it and into the characters. And I knew Uzo from the workshop we did a couple years ago, so I was really excited to support her, and the show was SO good. And I go to my email, and I see 'Orange is the New Black,' and i thought I was hallucinating. I thought 'this must not be real.' And then I opened it up, and it was in fact real, and it was for the next morning."

3. She loved singing on set."Definitely the most fun that I had on-set would be the "blackout" episode where i start a singalong. And everyone was kind of on set that day, the cafeteria was in shambles, it was dark, there were tiny lamps and we were all singing Lisa Loeb and Meredith Brooks and it was so much fun. And I think most of the cast was there that day, you know, when we weren't have a blast shooting the scenes we were having so much fun hanging out in the hallway. So that was definitely the most fun I had shooting."

4. Her favorite episode from this season was the fourth, "A Whole Other Hole."

"Hands down, for me it would have to be Episode 4. The backstory: Yael Stone is UNBELIEVABLE. I don't even know what to say to her anymore because she is just so brilliant. I don't even know where she got such a great performance. Also the writing is so good. I was surprised and I had read the script, just because the way it reads, it Makes Sense. It was a backstory that made sense because it was such a 180, but it's also like it's not outside the realm of possibility. So that was one of the most amazing episodes to watch as a viewer."

6. Like her character, she doesn't wear deodorant. "I actually don't wear deodorant in life. I wear a lavender oil on my underarms, and actually at a certain point - it sounds gross, because it's not typical, and it all kind of started after the whole 'smelly Brook Soso' deal- I got curious and so i stopped wearing deodorant, and i shower often, but I started experimenting with different kinds of natural deodorants, and it turns out if you don't wear any deodorant at all and just put a little lavender oil in your armpits, people always comment on how good I smell."

7. Some of her dialogue was improvised. "There were times when they just really wanted me to ramble, and they said just say what comes to your mind. For the most part what was scripted I said, but there were times when I veered off. I don't know how much of it made the cut, but it was pretty much they wrote me monologues."

8. She'd love to be on Girls or Parks and Rec. "But I also would love to work on GIRLS, I think Lena Dunham is awesome. Also Parks & Rec is so hilarious and I would love to work with that group of people, I don't know what part I'd get to play on it, and I might be a bit young, but I think that is a brilliant show."

9. She met the real Piper. "I met her on-set towards the end of filming. It was very brief, but she had a very firm handshake."

10. She doesn't know Soso's backstory. "Well, I obviously would love to see her backstory. I would love to learn more about Brook. They don't give me much in terms of any of that on-set. I get the scripts as they come, and I kind of learn as I go. So I would just be interested to see what she's about why she got there, we kind of know that she was in there for political protest, but I would be interested to meet Meadow, and just see what the eff she did! I think every episode is an insight into the character."

More like this
'Everything I Know About Love' Differs From The Book For A Very Good Reason
By Sophie McEvoy
Julie Andrews Revealed A Surprising Behind-The-Scenes 'Bridgerton' Detail
By Grace Wehniainen
Who Is 'Umbrella Academy' Star Elliot Page Dating After His Divorce?
By Jake Viswanath
Paapa Essiedu Likes To Keep His Relationship Pretty Private
By Maxine Harrison
Get Even More From Bustle — Sign Up For The Newsletter