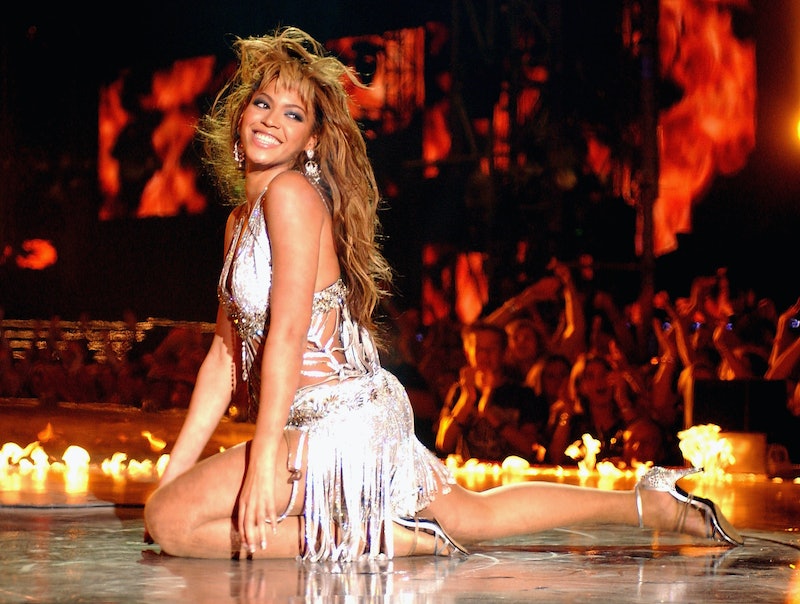 Beyonce's Dangerously In Love debuted eleven years ago this month, launching her solo career and subsequently taking over the world and earning the official title, "Queen Of Everything". This iconic album sparked the beginning of Beyonce's reign as Supreme Leader and the rise of The Beygency, as well as a lucrative career and several Billboard hits. Eleven years later, Beyonce's still ruling the world and raking in the cash from her On The Run tour with husband and alleged Monica Lewinsky-er (or rather, Bill Clinton-er) Jay-Z , which Forbes has predicted will be one of the most successful performance tours of all time. Ever. By successful we mean that premium seats are currently being offered for $500, but you can also watch the entire show on HBO from the comfort of your home if you need those extra $500 to say, pay your rent and eat food, like a normal person.

Before she was telling us to bow down and dropping secret albums on iTunes, Beyonce released the most iconic Beyonce album of all time and let the world know that she and Jay-Z were a thing. Several times. In several different songs. Elevator blow-out be damned, these two have continued their quest for world domination, and show no signs of letting up. We'd like to commemorate the album that started it all, and the top five best, most Beyonce singles from Dangerously In Love:

The ultimate post-breakup anthem, and the video debut of the Beyonce Bangs.

Possibly one of the most under-rated tracks on the album from back in the day before Beyonce was rolling up the partition.

Beyonce and Jay-Z had started officially dating when this classic came out, and she wanted to let us know things were going really, really well. In bed. Also, remember when Sean Paul was a thing?

Don't even act like you didn't try to recreate that opening dance sequence in your room in front of the mirror when this video came out. YOU KNOW YOU DID.

Easily the best Dangerously In Love radio single. The video, costarring Usher, proves that Beyonce is quite possibly the only person EVER who looks good in front of a multi-way mirror. "Naught Girl" set the precedent for what would later become an entire album about how good Jay-Z is at sex and about that time he "Monica Lewinsky-ed" on Beyonce's dress. It was a simpler time back in 2003.

More like this
Everything To Know About J-Hope From BTS’ Solo Album ‘Jack In The Box’
By Stephanie Topacio Long
Will Beyoncé Be At The BET Awards To Perform “Break My Soul” Or Attend The Show?
By Jake Viswanath
Photos Of The 'Elvis' Cast vs. Their IRL Counterparts Will Have You All Shook Up
By Grace Wehniainen
Taylor Swift's “Carolina” Theme For 'Where The Crawdads Sing' Soundtrack Is Here
By Jake Viswanath
Get Even More From Bustle — Sign Up For The Newsletter